3 PLATO was born in Athens in 427 in a wealthy and influential family. PLATO began his philosophical career as a student of Socrates. When the master died, PLATO travelled to Egypt and Italy, studied with students of Pythagoras, and spent several years advising the ruling family of Syracuse. Eventually, he returned to Athens and established his own school of PHILOSOPHY at the Academy. About 387 BC, PLATO founded a school in Athens, in a grove sacred to the demigod Academus, called the Academy (which is where we get the word academics from today). PLATO 'S ACADEMY.

4 It was, in effect, a university of higher learning, which included physical science, astronomy, and mathematics, as well as PHILOSOPHY . In addition to presiding over the Academy, PLATO delivered lectures, which were never published. The site of the academy was sacred to Athena and other immortals and contained a sacred grove of olive trees. PLATO possessed a small garden there in which he opened a school for those interested in receiving his instruction. Details of the organization of the academy are unknown, but it appears to have employed a method of teaching based on lectures, dialogue, and seminars.

5 THE WORKS RELATED TO education . Republic is a dialogue which discusses the education necessary to produce such a society. It is an education of a strange sort he called it paideia. Nearly impossible to translate into modern idiom, paideia refers to 131. the process whereby the physical, mental and spiritual development of the individual is of paramount importance. It is the education of the total individual. He discusses early education mainly in the Republic, written about 385 , and in the Laws, his last work, on which he was still at work at the end of his life.

6 PLATO 'S METAPHYSICS. PLATO argued that reality is known only through the mind. There is a higher world, independent of the world we may experience through our senses. Because the senses may deceive us, it is necessary that this higher world exist, a world of Ideas or Forms -- of what is unchanging, absolute and universal. In other words, although there may be something from the phenomenal world which we consider beautiful or good or just, PLATO postulates that there is a higher unchanging reality of the beautiful, goodness or justice. The task of education is to live in accordance with these universal standards -- to grasp the Forms is to grasp ultimate truth.

7 PLATO 'S EPISTEMOLOGY. He distinguishe between the reality presented to us by our senses . sight, touch, taste, sound and smell and the essence or Form of that reality. In other words, reality is always changing knowledge of reality is individual, it is particular, it is knowledge only to the individual knower, it is not universal. There are 3 sources of knowledge: Knowledge obtained from senses, knowledge of objects , colours, taste, touch etc. But PLATO does not consider this as real knowledge. An opinion regarding any object , but this knowledge cannot be relied upon as the views of every person differs regarding the same object.

8 Knowledge through mind or wisdom it is the highest degree of knowledge which includes virtues like truth , goodness and beauty. This knowledge is idealistic and is based on original thinking. The characteristic of knowledge is that it is found in the form of universal truth. The highest goal of education , PLATO believed, is the knowledge of Good; to nurture a man to a better human being, it is not merely an awareness of particular benefits and pleasures. 132. FORMATION OF THE SOCIETY. PLATO argued that societies are invariably formed for a particular purpose.

9 Individual human beings are not self-sufficient; no one working alone can acquire all of the genuine necessities of life. In order to resolve this difficulty, we gather together into communities for the mutual achievement of our common goals. This succeeds because we can work more efficiently if each of us specializes in the practice of a specific craft: I make all of the shoes; you grow all of the vegetables; she does all of the carpentry; etc. Thus, PLATO held that separation of functions and specialization of labor are the keys to the establishment of a worthwhile society.

10 DIVISION OF THE STATE ON SPECIALISATION OF LABOUR. When each of these classes performs its own role appropriately and does not try to take over the function of any other class, PLATO held, the entire city as a whole will operate smoothly, exhibiting the harmony that is genuine justice. (Republic 433e) it leads to ideal state. But the smooth operation of the whole society will require some additional services that become necessary only because of the creation of the social organization itself the adjudication of disputes among members and the defense of the city against external attacks, for example, PLATO proposed the establishment of an additional class of citizens, the guardians who are responsible for management of the society itself. 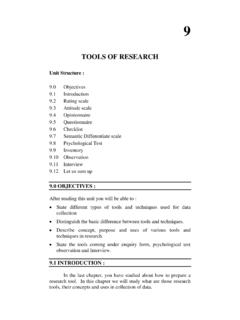 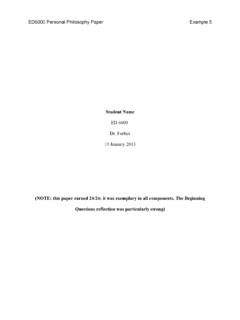 2 2 Philosophy of Education Introduction My philosophy of education was formed at a young age as a result of my experiences in school, and consequently is has been undoubtedly flawed. 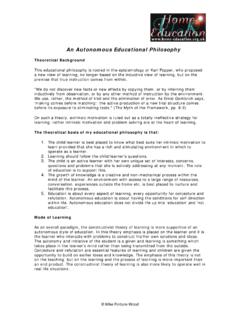 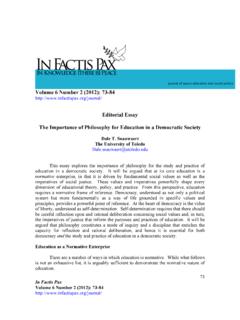 The Importance of Philosophy for Education in a …

In Factis Pax Volume 6 Number 2 (2012): 73-84 http://www.infactispax.org/journal/ 74 First, education is an intentional activity. The planning and implementation of

Education, Importance, Philosophy, The importance of philosophy for education

Philosophy of Education (Example #1) My personal goal for my future classroom is to challenge students and watch them grow to their full potential. I want to take students at different levels and see them develop together for the 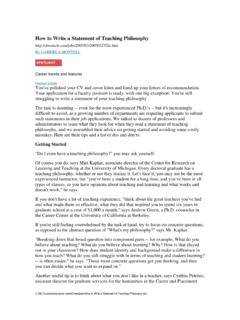 How to Write a Statement of Teaching Philosophy