Portable Swimming Pool Reverse Osmosis Systems C. Brent Cluff, Clean Water Products A standard practice for pool owners is to periodi- what to do with the water, how to avoid plaster delami- cally drain the Swimming pool to reduce calcium and nation, or floating the pool or having the sides cave in magnesium hardness as well as other water contami- (with high ground water tables), etc. The Swimming nants. A Swimming pool Reverse Osmosis unit has been pool Reverse Osmosis unit was developed and patented developed that can remove common impurities without as a result of a University of Arizona nanofiltration replacing the vast majority of the water. The swim- research program which began in 1988. ming pool nanofiltration unit takes the impurities Existing units as described in this paper have from the pool water and concentrates them into 10 been designed for residential Swimming pool use. Many 15% of the water.

22 The Journal of the Swimming Pool and Spa Industry Construction After being pumped from the pool, the pool water first goes through a catalytic conditioner and then a 5

1 Portable Swimming Pool Reverse Osmosis Systems C. Brent Cluff, Clean Water Products A standard practice for pool owners is to periodi- what to do with the water, how to avoid plaster delami- cally drain the Swimming pool to reduce calcium and nation, or floating the pool or having the sides cave in magnesium hardness as well as other water contami- (with high ground water tables), etc. The Swimming nants. A Swimming pool Reverse Osmosis unit has been pool Reverse Osmosis unit was developed and patented developed that can remove common impurities without as a result of a University of Arizona nanofiltration replacing the vast majority of the water. The swim- research program which began in 1988. ming pool nanofiltration unit takes the impurities Existing units as described in this paper have from the pool water and concentrates them into 10 been designed for residential Swimming pool use. Many 15% of the water.

2 It then puts the remaining 85 90% other configurations are being manufactured for de- of the water back into the pool. All contaminants are salination, effluent treatment, etc. New models, for reduced including calcium, sodium, chloride, sulfates, unique applications or for larger (commercial) pools carbonates, heavy metals, cyanuric acid as well as are being contemplated and can be discussed with the dissolved organics. It generally takes one to two days manufacturer. for an average sized residential pool to reduce the salinity level by 1000 ppm and the calcium level by 500. ppm or more. (Figures used in this paper assume an average gallon capacity of 16,000 to 20,000 gallons in an average residential pool.) Introduction The Swimming pool Reverse Osmosis units are The University of Arizona began a nanofiltration built in two size configurations for use on residential research program in the spring of 1988.

3 Nanofiltra- pools. One size is small enough that the customer could tion as used in this report is the same as low pressure rent one from his Swimming pool supply store. He Reverse Osmosis . As soon as the catalytic conditioner could transport it in his trunk. It would be no more technology was combined with nanofiltration it was difficult to use than a carpet washing machine like determined that its use on Swimming pools would be those that are rented every day. It would take a small practical. A nanofilter test without the catalytic con- unit 4 to 6 days to do an average residential pool ditioner ended after twelve hours with the nanofilter depending on the initial quality of the water. badly fouled with calcium scaling. The nanofilter was cleaned using a pH acid wash. This cleaning Larger units are currently being operated by pool brought the production and TDS removal back to their service companies.

4 The larger units are placed on a original values. Following the cleaning a catalytic trailer. This type of unit can process the water in an conditioner was added as a pretreatment and the average pool in 1 2 days. The large unit can service nanofilter was put in operation on the same pool from 175 to 350 residential pools per year. In many without any fouling. The same elements were incorpo- locations it can produce a water quality that is better rated into a small Swimming pool nanofilter unit than the potable water used to refill the Swimming (using three 4 x 60 inch membranes) and were used pool. The unit not only conserves water (by cleaning the on 20 pools or more without calcium scaling even water rather than draining and refilling the ) but though the calcium level in some of the pools exceeded also avoids problems associated with draining such as 1000 ppm, with a recovery rate of 90%. These were very surprising results, but they have been verified Journal of the Swimming Pool and Spa Industry with two more of the three tube nanofilter units, and Volume 1, Number 1, pages 21 24 five larger units (described below) that have been built Copyright 1995 by JSPSI and operated since that time.

5 All rights of reproduction in any form reserved. The Journal of the Swimming Pool and Spa Industry 21. Construction do so were given to its inventor. Both the method of encapsulation and the combination of a catalytic condi- After being pumped from the pool, the pool water tioner that make the Swimming pool nanofiltration first goes through a catalytic conditioner and then a 5 . unit practical are covered in US patent 5,112,483. A. micron prefilter. The conditioner prevents calcium second, generic patent covering the use of any Portable scaling by forming microscopic calcite crystals which RO system for Swimming pool purification has been do not adhere to the nanofilter. The prefilter reduces covered in US patent 5,234,583. The equipment is the size of suspended debris going into the nanofilters commercially available through Clean Water Prod- to less than 5 microns. Three 4 x 60 inch cellulose ucts, at 1870 West Prince Road, Suite 9, Tucson, acetate (CA) elements were used on the first three Arizona 85705.

6 Units built. At first one low pressure CA and two medium pressure cylindrically wrapped CA elements were used. A recirculation loop was also used so that Operation a large flux could be maintained in the elements (4 The large nanofiltration units (as described above). gpm) even though the reject was less than gpm. are mounted on platforms with 6 inch diameter pneu- Because of the recirculation the first element was matic tires. The unit can be rolled up a ramp into a exposed to relatively brackish water so it was found trailer for transporting. The pneumatic tires cushion that a better salinity and hardness removal could be the unit so that it is not damaged in transit. Whenever achieved if 3 medium pressure CA elements were feasible the nanofiltration unit can be left on the used. When the three medium pressure CA elements trailer and hoses extended to the pool, otherwise the were used the flow rate dropped to 4000 gallon per day unit can be rolled poolside through 3 foot wide gates.

7 (GPD). It would take at least 8 days to drop the total The Portable nanofiltration unit is brought to the hardness in a pool by about 500 ppm (see Table 1). pool by the service man, who then extends three hose As noted in the Tables, the nanofiltration system lines. One hose is for pumping pool water to the unit removes much more than just calcium including (pool water suction), the second is for returning the sodium, sulfates, chlorides, carbonates, heavy metals, product water to the pool, the third is for running the dissolved organic material, and cyanuric acid. The reject water to a drain or other location for disposal. membrane restricts the passing of material greater In order to meet the element operation specifica- than (roughly) microns, which includes most tions the chlorine level in the pool must be reduced to undesirable impurities in Swimming pool water. a maximum of 1 ppm for the duration of the cleansing A local commercial pool service company, Tucson usually from 1 to 3 days.

8 Higher chlorine levels can Pool Chlor, was contacted. This company performed be tolerated for a short period of time, however long the initial pool testing, and said that they were inter- term use of higher chlorine levels will permanently ested in what the unit did, but that service companies damage the membranes. If necessary, algaecides may would want units that would remove calcium at least be used to prevent algae growth during the period of twice as fast. low chlorine levels. For best results the pH of the pool A new design was developed that used four 4 water should be reduced to below 7 (taking care, of inch elements and one 8 inch element. A photograph course, to shut down pool Systems to prevent damage of this unit is shown in Figure 1. This latest unit to them). These level changes can be quickly achieved utilizes schedule 80 PVC pipe and fittings to intercon- by the addition of sodium bisulfide or sodium thiosul- nect the total of 5 elements.

9 A recirculation loop is fate for chlorine reduction and muriatic acid or sodium used on the 8 inch element and on the last three 4 bisulfate for pH reduction. After the operation is inch elements. The large unit is 32 inches wide, 76 complete, the pool is rebalanced as needed. inches long and 3 foot high. It weights approximately In operation the units have gone through 20. 300 pounds when dry. relatively hard (see Tables) residential pools or more The large unit uses two pumps that require less without needing cleaning. However, the cleaning of than 20 amps to operate. Two household circuits are the membranes is not difficult. It requires about 45. used. This unit turned out to be as much as 7 times as minutes of recirculating 55 gallons of water (with a fast as the original, dropping the total hardness level special wash detergent added) through the system . by just over 900 ppm in a 18,000 gallon pool in 48 hours The detergent removes biological fouling.

10 If calcium (see Table 2). Four of these large units have been sold. scaling occurs it can be removed by using a low pH. Two units, are operating in Tucson, Arizona, one in wash. After each type of wash the unit is flushed out San Antonio, Texas, the last in North Hollywood, before being put back into service. The 5 micron California. prefilter needs to be changed when the pressure drop across the filter increases to 10 psi. In practice these The Swimming pool nanofiltration unit devel- filters have lasted for 10 pools or more on the large oped by the University of Arizona nanofiltration re- units. The cleaning is done at the shop by the pool search program has been patented after the rights to serviceman. 22 The Journal of the Swimming Pool and Spa Industry Economics Discussion The life of the nanofilter should be in excess of 4 Nanofiltration of Swimming pools, instead of years of continuous use if the filter unit is properly draining, is a practice that should interest most pool operated. 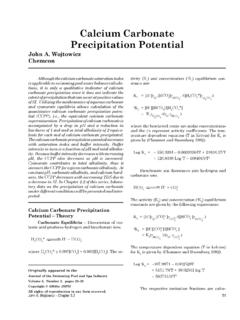 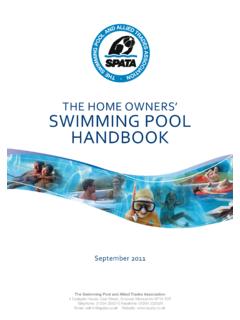 3 Swimming pool owners know that their pool can provide years of fun and exercise opportunities. Being able to relax by a pool can give a tremendous sense of wellbeing, 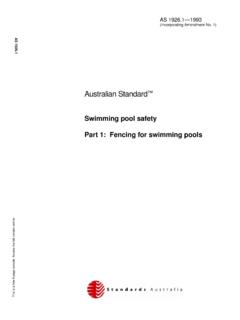 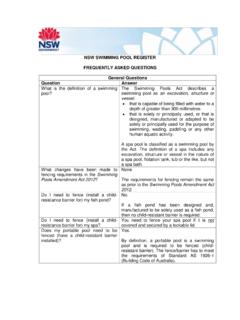 When do I have to register my pool? The Register will be available from 29 April 2013 and pool owners will have until the 29 October 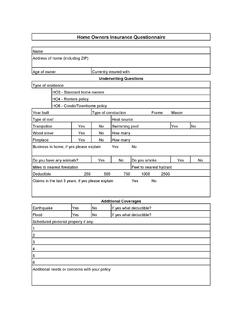