Preface UN DE RSTA ND I NG T RA NSFORMATION. Van K. Tharp , PhD. I 've been coaching traders for nearly three decades. Occasionally, someone asks, If Van Tharp is such a good trading coach, why doesn't he just trade? That statement makes a big presupposi- tion: namely, that the money one gets from trading or even trading success is the be-all and end-all of life, which certainly is not the case for me. My mission has always been to help people transform for the better; I just happen to do it through a trading metaphor. I thrive on the comments I get about how I've changed peoples'. lives. For example, here are a few of the comments I've gotten recently: Your program is not only helping me in my trading, but also in my business. I've been much more peaceful and open ever since I starting working with you. It's helped me with every- thing I do in my daily life. , Atlanta, GA.

xxvi Preface matter what you or any individual trader does; they are much big-ger than that. Big Money controls the U.S. government. You might

1 Preface UN DE RSTA ND I NG T RA NSFORMATION. Van K. Tharp , PhD. I 've been coaching traders for nearly three decades. Occasionally, someone asks, If Van Tharp is such a good trading coach, why doesn't he just trade? That statement makes a big presupposi- tion: namely, that the money one gets from trading or even trading success is the be-all and end-all of life, which certainly is not the case for me. My mission has always been to help people transform for the better; I just happen to do it through a trading metaphor. I thrive on the comments I get about how I've changed peoples'. lives. For example, here are a few of the comments I've gotten recently: Your program is not only helping me in my trading, but also in my business. I've been much more peaceful and open ever since I starting working with you. It's helped me with every- thing I do in my daily life. , Atlanta, GA.

2 Before taking your workshop, my life was filled with wants. After the class, I am more in line with my inner Self, and I just want to be. In addition, prior to the workshop, I scored 20 on the Happiness Test. After taking two classes, my score increased by 63 points to a nearly perfect 83. Thank you. , Franklin, VA. It's difficult to say how big an impact you've had on my life because you made the change so deep that everything has changed. This is a beautiful gift, and I want to thank you very much for everything you have done for me! .. I'm not alone xxiii xxiv Preface anymore, and I've found the path of true happiness. I know what my life's mission is and what I have to do to follow my bliss. I feel like I'm starting a new life again. , Quebec City, Canada After attending your workshop, I came back feeling like any dream was possible. When I started applying the techniques to my sales job, I had my biggest commission month in my 27-year sales career.

3 I made $200,000 for a month's work more than triple my prior career high. Now I can't wait to start manifest- ing in my new trading career. , Washington, DC. To make a long story short, my life changed from a chance meeting with a soft-spoken teddy bear named Van Tharp . I jumped from the life path of financial fear to a life path of fun and adventure. The changes I have gone through have improved both my marriage and my ability to think. , VA. Such comments about transformation are the engine that makes The Van Tharp Institute (VTI) run, because, as I've said, our mission is one of transformation through a trading metaphor. I thrive on it and my staff thrives on it. Recently, I realized that we actually take people through three levels of transformation: (1) transformation of the trading game;. (2) psychological transformation around beliefs, stuck feelings and conflicting parts; and (3) what I call Level III transformations, which occur when you make enough transformations that you actu- ally produce a major change in your consciousness.

4 After the three levels of transformation became clear to me, I. better understood what people need most to succeed. This book is designed to convey that information, with a number of chapters written about each level of transformation. But let's talk about the title of this book, Trading Beyond the Matrix: The Red Pill for Traders and Investors. When I first saw the movie, The Matrix, I loved it, not for the action but for the meta- phor. In fact, I recently watched it again and discovered that I. didn't remember a lot of the details, just the metaphor. The metaphor suggests that we are all programmed. We live in a world of illusion shaped by our programming. And at some level, we seem to know that, and we seem to know that there is something Preface xxv better. At this point, you have a choice. You can take the blue pill and go back into a comfortable sleep where nothing changes.

5 In this case, it means put the book back on the shelf and do nothing. Or you take the red pill and, as Morpheus says in the movie, see how deep the rabbit hole goes. Read this book, do what it suggests, and your life will change forever. We really are so programmed by our beliefs, which we get from our parents, our churches, our schooling, our friends, and the media. We believe what we believe, and that tends to shape our reality. We'll explore that extensively in Chapter 7 of this book. However, once you take the red pill (hopefully this book, for you), you can begin to explore whether or not those beliefs are useful for functioning at a high level within the Matrix. In the Matrix movie, Neo actually gets reprogrammed like a computer, but you can do the same thing by becoming aware of how your beliefs program you and whether or not that program- ming suits you. And as you start to do so, you begin to function as at a very high level within the Matrix.

6 So now, let's look a little more closely at the three levels of transformation. Level I: Transformation of the Trading Game The first level we offer is transformation of the trading game . from rules that assure big money wins to rules that give the astute trader a huge edge. These new rules consist of the Tharp Think concepts I require everyone in my Super Trader program to know and understand as the cornerstone of their training. These rules are given in Chapter 6, the summary of Section I of this book. Most of them are not my rules; they come from my modeling work with great traders. But I don't know of anyone else with a program that emphasizes all of them. In one of my advanced workshops, I teach the concept that we all play games in life. A game can be defined as any interaction consisting of two or more players with a set of rules that generally define how the game is won or lost.

7 I'm using the concept of the trading game to symbolize a big-picture description of all aspects of trading. I believe the financial markets are part of a huge game, and at the top level where the rules get set, made and changed . there is Big Money. Big Money makes its own rules and profits no xxvi Preface We all play games in life. matter what you or any individual trader does; they are much big- ger than that. Big Money controls the government. You might have noticed, for example, where Treasury leaders so often come from and where they go afterwards. The last six secretaries of the treasury have included two people with strong ties to Goldman Sachs, a former president of the New York Federal Reserve, and a chief economist at the World Bank. The other two were both for- mer company CEOs. Much controversy has been associated with these men, but it is generally ignored by the public.

8 In addition, the Federal Reserve, which prints dollars, is not government owned or controlled. Instead, it is privately owned by some of the richest people in the It's interesting to note that the income tax and the Federal Reserve were created almost simultaneously. And right now the Federal Reserve is stimulating the economy by giving money to the very people who own it . the big banks. Big Money has also created a two-party political system in which people argue over everything except what is really going on and what is really important to the future of the United States . something that might be true of almost every country in the world. Preface xxvii The real issue today, for example, is government spending. But the political parties tend to argue over whether or not it is fair for the rich to pay hefty taxes. This game is a little like the programming in the Matrix movie.

9 We're all programmed by our beliefs and our beliefs all say that we should play this game. And that means that you need to fight the crowd in order to function at a super human level within the Matrix. Everyone is a part of the system because they adopt the beliefs of the system and thus support it even if those beliefs do not support them. As Morpheus says, most people are so inured, so hopelessly dependent on the system that they will fight to protect it. Does that sound familiar? Trading is not easy to do, but becoming a trader is easy. There are no obstacles whatsoever to anyone opening a trading account. My wife, for example, currently has a trading account with less than $100 in it. I've said for a long time that if trading were easy, Big Money would monopolize it. They'd do so by making the entry require- ments so steep that it would be impossible for an average person to trade, perhaps through an education and exam system that would weed out most people.

10 Today, for example, brokers have to take a Series 7 exam even though passing this exam has absolutely noth- ing to do with success in the market. If you want to know Big Money's rule, just watch the financial media for a week or so. They'll imply that: Selecting the right investment ( , picking the right stock) is everything. When you find the right investment, buy it and hold it for the long term. You must spend a lot of time analyzing the market to find the right investment. You should listen to experts for advice, including newsletter writers, brokers, and investment gurus on television. My experience indicates that those old rules are what cause most people to be net losers in the markets. Through my modeling work with top traders and investors, looking at what they do and how they think, I've come up with a new set of rules. We call these xxviii Preface rules Tharp Think. 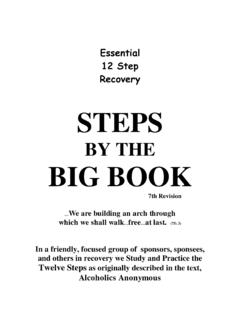 THE WAY IT WORKS The ARISE program is made up of two main components: in-class instruction and hands-on ministry experience. We call our curriculum The Story.With over 250 hours of instruction, it forms the major part of the program. 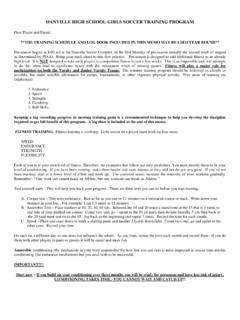 danville high school girls soccer training program dear player and parent, **the training schedule and log book included in this memo may be used year round** 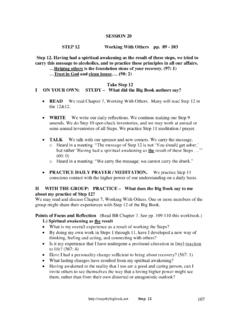 http://stepsbybigbook.net Step 12 109 STEP 12 PASS THIS ON (94: 1) PRINCIPLES FROM THE BIG BOOK When all other measures failed, work with another alcoholic 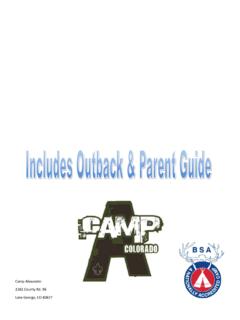 2 the number one biggest headache for units coming to camp is not having the medical and medication forms completed correctly!!! the next page will explain