PRELIMINARY INVESTIGATION REPORT ON THE SINKING …

2 CASUALTIES AND INCIDENTS, Resolution (20), as amended, and the International conventions to which each State is Party. Several factors while conducting the INVESTIGATION , and while discussing a PRELIMINARY draft REPORT resulted in the issuance of separate reports by each State. The present REPORT is based fully on the United Nations Convention on the Law of the Sea (UNCLOS), the International Conventions to which panama is Party, Panamanian National law and the IMO resolution (20), as amended. Note: The original version of the PRELIMINARY REPORT is presented in the Spanish language; however, for matters of cross reference, the present REPORT has been made available in English.

3 OBJETIVE. The sole objective of the INVESTIGATION of the SINKING of M/V AL SALAM BOCCACCIO 98. is to determine its cause(s), in order to prevent future accidents of the same nature, taking as a reference the IMO Code for the INVESTIGATION of Marine Casualties and Incidents, Resolution A. 849(20), as amended. This INVESTIGATION is not for the purpose of determining liability, or to apportion blame;. however, the investigating authorities have not refrained from fully reporting the cause(s) because fault or liability may be inferred from the findings. This is a PRELIMINARY REPORT stating the facts and conclusions achieved at this stage.

4 Additional information may be provided in due course as a result of further INVESTIGATION , if found necessary, which will be addressed in the final REPORT . We reiterate that the intent of this REPORT is not to adopt a position of pointing out fault or blame. Nonetheless, we need to identify errors, whether technical or human, in order to correct them, and to avoid recurrence of accidents of this nature. i SYNOPSIS. The M/V AL SALAM BOCCACCIO 98, was a panama registered RO-RO passenger vessel, which sank on February 03, 2006, at approximately 0133 hours Egypt local time (2333 hours UTC on February 02, 2006), during her journey across the Red Sea, a short international voyage where she departed from the Port of Duba, Saudi Arabia, with destination to Safaga, Egypt.

5 The vessel departed from the Port of Duba at 1651 hours UTC, with a total of 1418. persons on board, including crew members, and their luggage, and fully loaded with cars and some trucks. The voyage started as usual, while the vessel was on routine normal trading between the above-mentioned ports. Approximately 2 hours and 20 minutes after departure, at about 1909 hours UTC, the auto-pilot alarm sounded on the bridge and few seconds later, the fire-alarm sounded. The crew members started fighting the fire with different means on board and as a result of the fire mitigation, the scuppers were blocked, and the accumulation of a large amount of water, coupled with the weather conditions, finally caused an excessive list of the vessel to starboard.

6 With the intention of correcting the list of the vessel, the master began ordering ballast water operations leading to a further increase of the list of the vessel. As a result of the list, sea water ingressed into the vessel eventually causing the SINKING . No orders of evacuation were given to the crew members or the passengers at any time. This accident was due to a sequence of events, and caused the loss of 1,031 persons, including some crew members, the total loss of the cargo and the vessel. With the outcome of this INVESTIGATION several recommendations have been made to the IMO, the Flag State, the Coastal State and the Management Companies of RO-RO. 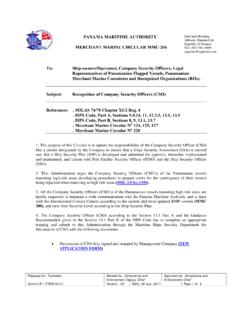 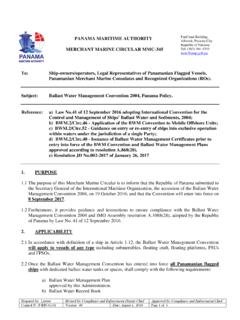 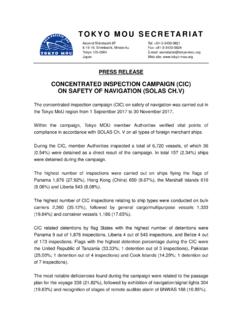 * The Memorandum of Understanding on Port State Control in the AsiaPacific Region, - known as the Tokyo MOU, was signed among eighteen maritime Authorities in the region 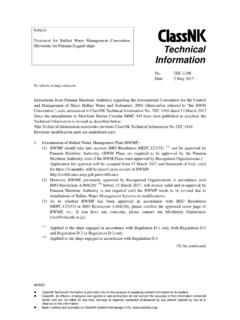 Void NOTES: ClassNK Technical Information is providedonly for the purpose of supplying current information to its readers. ClassNK, its officers, employees and agents or subcontractors do not warrant the accuracy of the - information contained 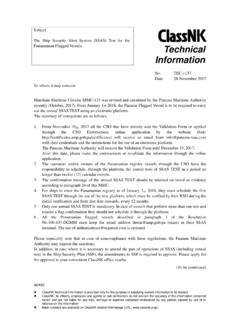 NOTES: ClassNK Technical Information is provided only for the purpose of supplying current information to its readers. ClassNK, its officers, employees and agents or subcontractors do not warrant the accuracy of the - information contained

Attendance of the meeting The 29 th meeting of the Port State Control Committeewas attended by member the Authorities of Australia, Canada, Chile, China, Fiji, Hong Kong (China), Indonesia, Japan, the