2 Only). CARE A (Is)'; Stable Issuer Rating - (Single A (Issuer Rating), Outlook: Reaffirmed Stable). Details of instruments/facilities in annexure -1. Detailed Rationale & Key Rating Drivers The ratings assigned to the bank facilities/instruments of West Bengal State Electricity Transmission Co Ltd (WBSETCL). continue to draw strength from the 100% ownership by the Government of West Bengal (GoWB) and monopoly status in the power transmission in West Bengal with wide transmission network. The ratings also factors in the regulated nature of operations based on cost-plus based tariff, strong operational efficiency as indicated by high system availability and low transmission loss, satisfactory collection efficiency and profitability in FY17 and 9 MFY18.

3 The ratings, however, continue to remain constrained by customer concentration risk, exposure to regulatory risk given non-receipt of true-up order post FY13, risk associated with execution and implementation of on-going projects accentuated by possible delays in land acquisition and right of way. Any deviation from the funding pattern of the project leading to significant change in WBSETCL's capital structure (overall gearing exceeding ) and its ability to continue maintaining high system availability, performance of its sole customer (West Bengal State Electricity Distribution Co Ltd; rated CARE BBB+; Stable) and timely collection of receivables shall remain the key rating sensitivities.

4 Detailed description of the key rating drivers Key Rating Strengths Wholly-owned undertaking of GoWB. Incorporated on February 16, 2007 as a wholly owned subsidiary of GoWB via spin-off of WBSEB, the company is involved in carrying out the power transmission activity of WBSEB as a separate dedicated company. Sole transmission utility in the State of West Bengal The area of operation of WBSETCL covers the entire State of West Bengal , except for those areas that are covered by other licensees like CESC, DVC, Durgapur Power Ltd. and Indian Power Corporation Ltd. (IPCL). It handled energy flow of 46,802. million units (MU) in FY17 (43,344 MU in FY16). High operational efficiency exemplified by high system availability and low transmission loss The company is continuously increasing its transmission network every year and having a transmission network of 12,584.

5 Circuit kilometre (Ckm) having transmission capacity of about 25,661 MVA spread across the entire State of West Bengal . Over the past seven years, transmission loss for WBSETCL has been around 3% which is better than the WBERC norms. The company has also maintained system availability of over 99% during the last four years with the availability being in FY17. Assured revenue at cost plus' tariff Transmission charges is billed and accounted for on the basis of tariff orders which stipulates the Annual Revenue Requirement (ARR) under cost plus' mechanism. All reasonable expenses (including duties, taxes, etc.) are pass-through in tariff with return on equity. Any incremental uncontrollable expense is also allowed to be passed through in tariff 1.

6 Complete definition of the ratings assigned are available at and other CARE publications 1 CARE Ratings Limited Press Release through APR process. Satisfactory financial performance Net sales of the company remained almost stable in FY17. The profitability of the company remained robust in view of high operational efficiency in terms of high network availability and low transmission loss. GCA was satisfactory at crore in FY17 vis- -vis debt repayment obligation of crore in FY17. Interest coverage, though deteriorated, continued to remain satisfactory at in FY17. The financial performance for 9 MFY18 remained in line with 9 MFY17 with a PAT of crore ( crore in 9 MFY17) on a total operating income of crore in 9 MFY18 ( crore in 9 MFY17).

7 Moderate leverage ratios and operating cycle Overall gearing ratio, though improved, continues to remain moderate at as on March 31, 2017 vis-a-vis as on March 31, 2016 ( as on March 31, 2015) due to accretion of profits to reserves. The average collection period in FY17. stood at 74 days as WBSEDCL is fully utilizing 60 days credit period. This combined with higher inventory period and lower creditors' days resulted in the higher operating cycle. Average utilisation of bank limit during 12 months ending February 2018 was moderate at 50%. Sufficient financial flexibility for executing debt-laden capex With a view to match the anticipated growth in the energy demand in West Bengal and the expected generation capacity addition during the XIII Plan period (FY18-FY22), WBSETCL has undertaken various expansion projects towards development of transmission infrastructure.

8 The company incurred a capex of crore during FY17 and has outlined an investment plan of around ,850 crore in the next five years (FY18-FY22) as per its tariff petition filed for FY17-FY18. To support the projected investments, the company has to largely rely on the loans from financial institutions and private placement of bonds (as WBERC norms provide for the project to be financed at a debt-equity ratio of :1). Considering the overall gearing ratio of as on March 31, 2017, the company has sufficient financial flexibility for executing debt-laden capex. Key Rating Weaknesses Customer concentration risk WBSEDCL is the sole long term user of the transmission network of WBSETCL. Although WBSETCL's transmission charges constituted only 5-7% of WBSEDCL's total cost, WBSEDCL's performance is critical for sustenance of WBSETCL.

9 WBSETCL has tied up for a long term agreement with Haldia Energy Limited, IPCL and Eastern Railways, which shall help WBSETCL reduce the customer concentration risk, though to a small extent. Regulatory risk Revenue from transmission charges is collected based on the tariff fixed by WBERC, which stipulates the ARR to be recovered from the consumers during the year under consideration. Any delay in issuing orders, and any change in the terms and conditions of tariff determination as well as disallowance of any of the ARR components may have a significant impact on the profitability of WBSETCL. WBSETCL has submitted APR petition for FY14 - FY17 with aggregate claim of crore. However, the order in respect of the same is pending, exposing WBSETCL to regulatory risk.

10 Project execution risk High population density and relatively high percentage of population being dependent on agriculture has led to reduced availability of land and right of way (ROW) posing major risk for the expansion of transmission network that the company is undertaking. Analytical approach: Standalone Applicable Criteria Criteria on assigning Outlook to Credit Ratings CARE's Policy on Default Recognition Financial ratios Non-Financial Sector Criteria for Short Term Instruments Rating Methodology Infrastructure Service Sector About the Company Incorporated in 2007, as a part of the restructuring initiative of West Bengal State Electricity Board (WBSEB) - which had its operations spanning across complete value chain of generation, distribution and transmission of power - WBSETCL has been established as a separate dedicated company, wholly owned by the Government of West Bengal (GoWB), for carrying out the power transmission activity. 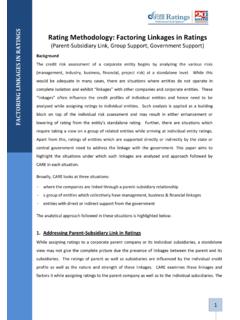 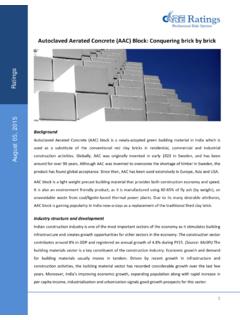 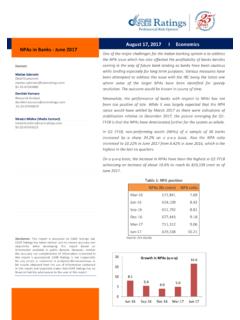 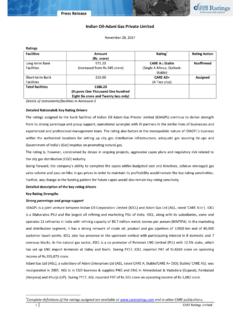 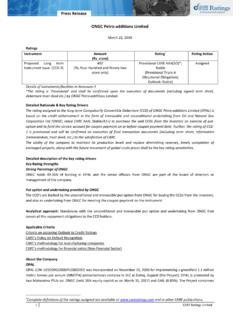 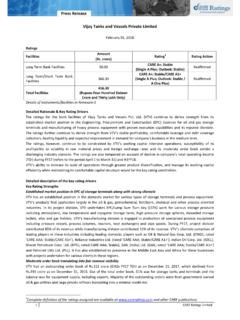 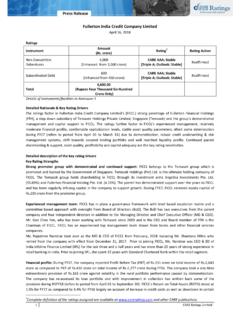 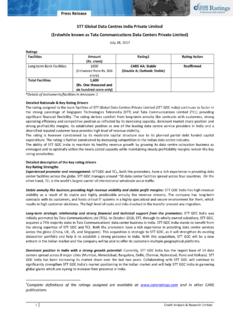 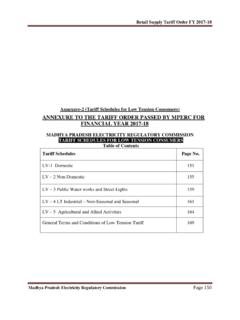 ANNEXURE TO THE TARIFF ORDER PASSED BY … 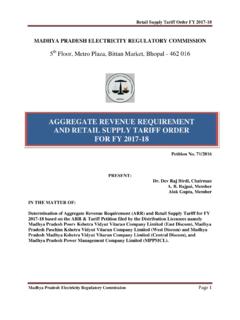 Retail Supply Tariff Order FY 2017-18 Madhya Pradesh Electricity Regulatory Commission Page 6 A1: ORDER (Passed on this 31st Day of March, 2017) 1.1 This order is in response to the petition No. 71 of 2016 jointly filed by Madhya 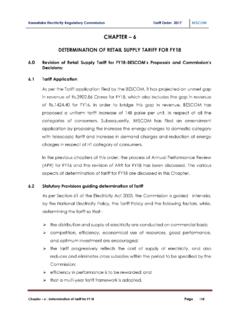 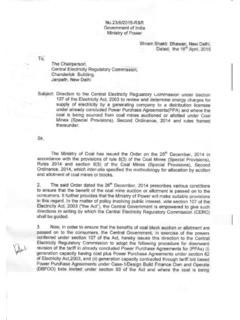 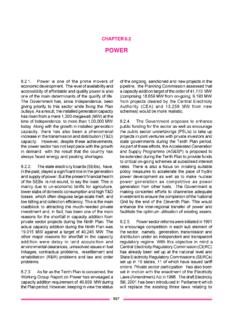 897 8.2.1. Power is one of the prime movers of economic development. The level of availability and accessibility of affordable and quality power is also 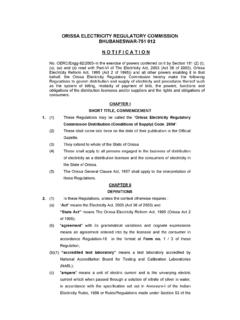