Privatisation and nationalisation in the 21st century …

This version: 29 September 2002. Quiggin, J. (2002), Privatisation and nationalisation in the 21st century ', <i>Growth</i> 50, 66 73. Privatisation and nationalisation in the 21st century John Quiggin Australian Research Council Senior Fellow School of Economics Faculty of Economics and Commerce Australian National University EMAIL FAX + 61 2 61255124. Phone + 61 2 61254853 (bh). + 61 2 62578992(ah). I thank Nancy Wallace for helpful comments and criticism. This research was supported by an Australian Research Council Senior Fellowship and Australian Research Council Large Grant A00000873. Privatisation and nationalisation in the 21st century Introduction In economic terms, the dominant policy trend of the 20th century was that of nationalisation . In almost all countries, and on almost all measures, the range of economic activities undertaken by governments was substantially larger at the end of the 20th century than at the beginning, as was the ratio of public revenue and expenditure to national income.

Privatisation and Nationalisation in the 21st century Introduction In economic terms, the dominant policy trend of the 20th century was that of

1 This version: 29 September 2002. Quiggin, J. (2002), Privatisation and nationalisation in the 21st century ', <i>Growth</i> 50, 66 73. Privatisation and nationalisation in the 21st century John Quiggin Australian Research Council Senior Fellow School of Economics Faculty of Economics and Commerce Australian National University EMAIL FAX + 61 2 61255124. Phone + 61 2 61254853 (bh). + 61 2 62578992(ah). I thank Nancy Wallace for helpful comments and criticism. This research was supported by an Australian Research Council Senior Fellowship and Australian Research Council Large Grant A00000873. Privatisation and nationalisation in the 21st century Introduction In economic terms, the dominant policy trend of the 20th century was that of nationalisation . In almost all countries, and on almost all measures, the range of economic activities undertaken by governments was substantially larger at the end of the 20th century than at the beginning, as was the ratio of public revenue and expenditure to national income.

2 During the last twenty years, however, there were sustained, and to some extent successful, attempts to roll back the growth of government. Centrally planned economies collapsed and began a transition towards a market-oriented model. In the developed OECD. countries, Privatisation of publicly-owned enterprises took place on a large scale, beginning with the sale by public float of British Telecom, undertaken by the Thatcher government in the United Kingdom in 1985. These developments popularised a triumphalist' analysis, in which it was claimed that capitalism' had triumphed over socialism', inaugurating the end of history'. (Fukuyama). This claim was clearly correct insofar as capitalism' referred to the set of economic and political systems prevailing in OECD countries, ranging from the United States to Norway, and socialism' referred to the systems prevailing in the Soviet Union.

3 However, as was made clear by Fukuyama and subsequent writers such as Friedman (1999), a much stronger claim was intended. The claim was that history had shown the inevitably of a free-market system similar in broad terms to that prevailing in the United States, but with reductions in the role of government along the lines of those proposed in the Republican Party's Contract with America (Gingrich 1994). Such claims were premature. Although Privatisation reduced the role of government in the provision of marketed goods and services, the general government sector (health, education, community services and social welfare) continued to grow in absolute terms and, in many countries, as a proportion of GDP, throughout the 1980s and 1990s. Moreover, by the late 1990s, the pace of Privatisation had clearly slowed. For example, whereas, before 1995, almost all proposals for Privatisation in Australia had been successful, in the period after 1995 most were rejected.

5 Second, analysis of wealth transfers is an important part of any evaluation of welfare effects. Finally, the political economy of Privatisation and nationalisation is largely determined by the direction and magnitude of wealth transfers. Underpricing and buyer overoptimism The most obvious transfers associated with Privatisation by public float, as with private sector initial public offerings (IPOs) arise when the offer price for shares is set at a level below the market value of the shares, as revealed in early trading. In both the private and public sectors, there are incentives for the organisers of IPOs to set prices below the expected market price, thereby allowing those participating in the float to benefit from first- day stag' profits. First, the negative consequences associated with a failed' float (one in which not all shares on offer are taken up) are generally greater than for a float that is oversubscribed.

6 This is particularly true in relation to politically controversial privatisations, where a failure to purchase shares can be represented as a lack of confidence in the government. Second, the allocation of underpriced shares provides opportunities to give favours to individuals and groups whose goodwill may be valuable in future. Such favours were a prominent and controversial feature of the recent stockmarket bubble in the United States. The allocation of discounted shares to employees and others has been a common feature of Privatisation in Australia and elsewhere. Transfers have also arisen in relation to Privatisation by trade sale. In many developing and transitional countries Privatisation by trade sale has been the occasion for large-scale expropriation of public wealth. Australian experience has been more favourable, from the viewpoint of the public.

7 Although some assets, such as the NSW State Bank, appear to have been sold at unreasonably low prices (Walker and Walker 2000), there have been other instances, such as the sale of Victorian electricity distribution enterprises, where the price paid appeared unreasonably high in the light of the regulatory regime that determined subsequent earnings. In some cases, of this kind, such as the Privatisation of airports, regulations have been relaxed to allow higher profits, retrospectively validating high sale prices. Prices and service quality The impact of Privatisation on prices and service quality has varied, depending particularly on the nature of regulatory changes introduced at the time of Privatisation . In general, direct impacts on prices have been small, except where governments have sought to increase the sale price of assets by raising costs to consumers.

8 The most notable recent example was the leasing of Australian airports, which was accompanied by large increases in landing charges (up to 100%), increases in other charges, such as parking fees, and the introduction of a range of new charges, such as taxi levies. Privatisation of monopolies, when combined with price regulation, has typically led to a reduction in service quality, as monopoly firms seek opportunities to reduce costs and raise profits. Over time, the introduction of steadily more intrusive regulation has reduced both the incentives for lower service quality and the differences in operational efficiency between private and public monopolies. In some other instances, Privatisation has led to the adoption of a more business-like and customer-focused' approach. This has typically been associated with an increase in the quality of service for profitable customers, but also with attempts to discard unprofitable customers and uncompensated community service obligations.

9 Safety and reliability Privatisation has generally been accompanied by a decline in the safety and reliability of infrastructure services, particularly when account is taken of exogenous technological trends, which have generally improved the reliability of equipment of all kinds. The cost reductions associated with Privatisation and, to a lesser extent, corporatisation, have focused particularly on reductions in overstaffing in areas such as maintenance and on the elimination of redundant capital capacity, frequently referred to as goldplating'. Other things being equal, cost savings achieved in this way must involve some loss of reliability and, in some cases, safety. The shift from public to private ownership reduces incentives for safety and reliability. The political costs of failures in infrastructure systems can be severe. By contrast, the costs to private infrastructure owners of occasional breakdowns is relatively modest.

10 Hence, if such outcomes are to be avoided, intrusive regulation is likely to be necessary. Another possible response is the introduction of a legal regime based on strict liability of infrastructure providers for economic losses associated with system failures. A current class action against Esso in relation to the consequences of the Longford explosion and system failure in Victoria may set a precedent in this respect. Surprisingly, relatively few supporters of the adoption of the US model of private provision of infrastructure services seem to welcome the arrival of a system of regulation in which the threat of litigation plays a central role, as in the US. None of the discussion above establishes whether the net impact of reductions in maintenance expenditure is positive or negative. Terms like goldplating' and redundancy'. tend to imply that there is too much reliability, but goldplating makes sense in some contexts (computers) and redundancy in others (aircraft control systems). 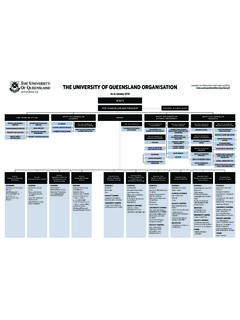 THE UNIVERSITY OF QUEENSLAND …

THE UNIVERSITY OF QUEENSLAND ORGANISATION As at January 2018 Issued by the Office of the Chief Operating Officer www.uq.edu.au/about/docs/org-chart.pdf 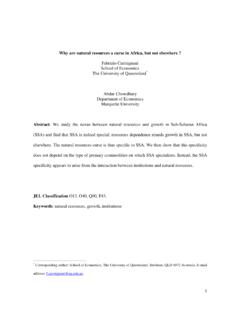 Why are natural resources a curse in Africa, but not ...

1 Why are natural resources a curse in Africa, but not elsewhere ? Fabrizio Carmignani School of Economics The University of Queensland * Abdur Chowdhury

Electricity Networks Privatization in Australia: An ...

A REVIEW OF AUSTRALIA’S COMPULSORY …

The Supply of Doctors in Australia: Is There A …

2 The OECD (Organisation for Economic Co-operation and Development), of which Australia is a member, accepts that its member countries have different benchmarks by 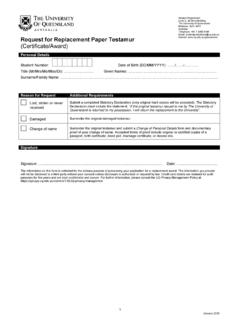 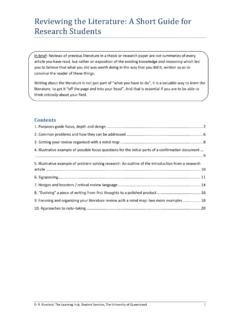 Reviewing the Literature: A Short Guide for … 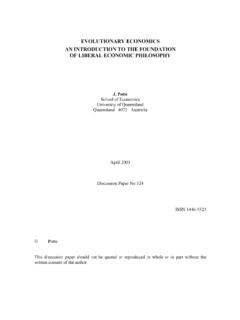 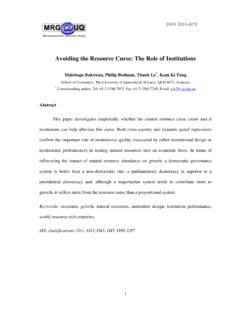 Avoiding the Resource Curse: The Role of Institutions

3 development. In fact, there is a growing body of evidence suggesting that natural resource abundance may be harmful to the economic development of … 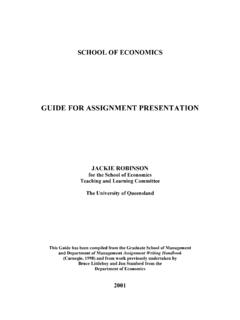 School of Economics, The University of Queensland GUIDE FOR ASSIGNMENT PRESENTATION An assignment should be regarded as a piece of academic writing. 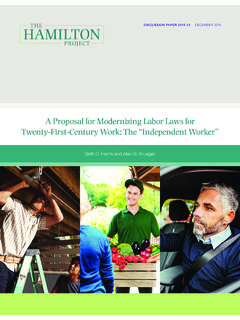 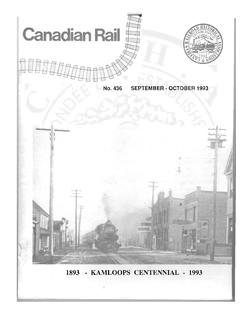 2 careers in psychology What is psychology? 3 them change behaviors that are having negative effects on their physical health. They work with business executives, performers, and athletes to reduce stress

THE HISTORY OF THE IDEA OF RACE… AND WHY IT …

© 2007 by the American Anthropological Association. All rights reserved. 2 documents relating to the establishment of colonies in America.