THAMES VALLEY. police . Problem . Solving . 4 Sept 96). Problem Solving IN THAMES VALLEY. reducing crime, the fear of crime and disorder This is being achieved through:- Operational Staff tackling the causes not just the symptoms Support Staff making Problem Solving happen Scanning Analysis Response Assessment A common framework for identifying problems and working together enables a better understanding of Thames Valley Policies, whether we are:- Civilian or police Operational or Support Manager or Practitioner We need 100% staff participation, not the 5% on patrol on a Saturday night. EWART WATSON. Crime & Partnership Consultancy September 96. Problem Solving . Social instability, drug dealing, and violent crime hurt more than the immediate victims: they create fear among the rest of us. We wonder who will be next, but are typically unable to take any resolute action.

TWO ASPECTS : PHILOSOPHY AND FUNCTION To successfully introduce problem solving into the Police Service it is necessary to establish a commitment to the philosophy; however due to the

1 THAMES VALLEY. police . Problem . Solving . 4 Sept 96). Problem Solving IN THAMES VALLEY. reducing crime, the fear of crime and disorder This is being achieved through:- Operational Staff tackling the causes not just the symptoms Support Staff making Problem Solving happen Scanning Analysis Response Assessment A common framework for identifying problems and working together enables a better understanding of Thames Valley Policies, whether we are:- Civilian or police Operational or Support Manager or Practitioner We need 100% staff participation, not the 5% on patrol on a Saturday night. EWART WATSON. Crime & Partnership Consultancy September 96. Problem Solving . Social instability, drug dealing, and violent crime hurt more than the immediate victims: they create fear among the rest of us. We wonder who will be next, but are typically unable to take any resolute action.

2 Until recently there was little the Criminal Justice System felt was appropriate beyond the police continued response to calls for service, arrests, and punishment of known and proven criminals. However research from the 1980's repeatedly implied that these strategies, no matter how efficiently run, were severely limited in their effectiveness. The first awareness of an unexplored dimension was Neighbourhood Watch Since the mid-1980's some innovative police forces in America began experimenting with techniques industry had adopted from management gurus. Many created turmoil and tension, only to wither and waste. Perhaps only one has displayed durability and achieved the accolade of a 'pivotal process' over the last ten years. This ' Problem -oriented* approach differs from traditional methods in several ways:- 1. police actively seek ways to prevent crime rather than simply react to calls.

3 2. police recognise that crime and public order problems arise from a variety of conditions: therefore analysis is needed to understand and respond appropriately to these unique conditions. 3. police understand that crime and public order problems stem from problems beyond the remit of any single agency. If problems are to be solved work with partners is crucial - (they must be willing!). Recent developments within Thames Valley have given some indication as to the potential which exists through the police involvement in multi-agency working. This potential can be achieved through analysis of a situation and the flexibility of police officers to engage proactiveiy (crime reduction/preventative patrols, schools programmes) or reactively (task forces, specialist units) depending on the circumstances. Incident-Driven Policing A decade ago the police were notorious for their success in dealing with major incidents BUT.

4 Their inability to resolve 'bulk' crime. We have in the past sought to apply the same process, methodology and response but to a bigger scale. The securing of additional resources has therefore been interpreted as vital. Yet research suggests that preventative patrol strength would need to be increased 30-fold throughout the country before it would have any lasting impact on crime. than 10% of all crime is reported within five minutes of occurring, so the fastest response not appreciatively result in more arrests of suspects. the recent scrutiny of the Audit Commission and the Home Office, our focus has moved achieving more effective use of current resources, guided by crime analysis. Now we alternative deployment, technological advance and employment strategies in order to things right1. new shift patterns changes in conditions of service civilianisation graded response crime screening We now realise:- i) Additional police resources applied in response to individual incidents of crime and disorder, will be ineffective at controlling crime.

5 Ii) Few incidents are isolated but can be symptoms of some recurring, underlying Problem . Problem analysis can help us develop effective, proactive and reactive tactics. iii) Crime problems are integrally linked to other problems: therefore the mobilisation of whole communities, commercial and private, is necessary. The question is - 'Can we also 'do right things?'. What's Missing? - A Problem Solving Approach Crime and criminal analysis is a vital player; but like the partnership philosophy must be applied locally by practitioners committed to an estate, beat, village, or patch. If our aim is to reduce the crime rate in a given area we must examine what is going on there - areas differ so the best plans may include common elements, but will differ from the next area's. I believe a tool is needed to assist with the initiation of such processes and vital to crime analysis.

6 The heart of the Problem oriented activity is systematic thinking. Three principles have proven vital in its application to Policing . i) Officers of all ranks, and all departments, should be able to use the procedure as part of their daily routine. ii) The system must encourage officers to collect information from a broad range of sources and not limit themselves to conventional police statistics. iii) Solutions should emanate beyond and initiate from outside the Criminal Justice partners. This Problem Solving process consists of four parts - S. A. Scanning as part of their daily routine, officers are expected to look for possible problems. Analysis Officers collect information about the Problem . This might include examining offenders, victims, the social and physical environments, as well as previous responses to the Problem .

7 The goal is to understand the nature of the Problem and its causes by drawing in information and experience of partners. Response Knowledge gained in the analysis stage is used to develop and implement solutions. Officers seek assistance (planning and action). from colleagues in other departments and external agencies. Assessment Officers evaluate the effectiveness of their response, using this knowledge and experience to revise the plan. 'Communicative Approach 1. Problem oriented Policing also requires the police to challenge their attitude to the community they serve. At present we ask little more of citizens than being reporters of crime, good witnesses and 'allow us to do our job'. like other agencies Problem Solving requires the police and community to communicate and co-operate on wide ranging issues. It acknowledges that often the community knows the problems intimately and the likely solutions.

8 A 'communicative approach' in all facets of work is therefore vital. This attitude must transcend all departments. It leads to intelligence, better relationships with agencies, and a genuine interest in quality first time 'callers'. An Opportunity in the Mist Both the New York police Department and Newport News (Washington DC) identified that 'in the long run it is likely that the Problem oriented approach will have its most dramatic impact .. on the relationship between the police , other city agencies, and the public* This offered an incredibly difficult issue for them to overcome. However for once we have an advantage over them with the advent of the community safety agenda which is shared between agencies of local government. Future - The future may lie in decentralised, multiagency practitioner groups working with an estate, village, beat or patch.

TABLE OF CONTENTS Letter From the Chief of Police 1 Community Oriented Policing Programs for the Youth of Spokane D.A.R.E. "Drug Abuse Resistance Education" 4 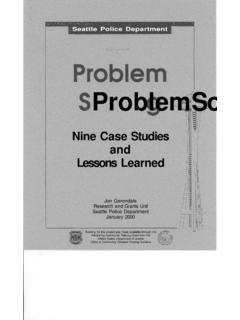 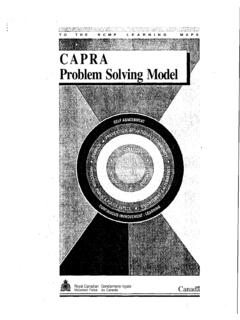 INTRODUCTION This is a learning tool designed to increase your understanding of the RCMP Community Policing Problem Solving Model, CAPRA. It is 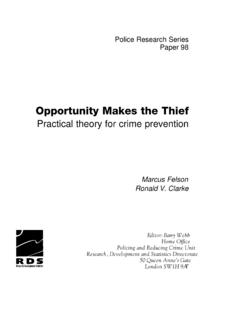 INTRODUCTION In June 1987, after the public, for the second time in two years, struck down a tax initiative that would have replenished depleting resources and personnel, a Community Attitude 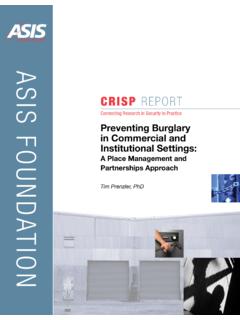 6 Crime Prevention Through Environmental Design Guidebook FOREWORDFOREWORD S ince its inception in 1981, the National Crime Prevention Council (NCPC) of Singapore had been actively working towards the objectives, such as, to raise the level of public awareness 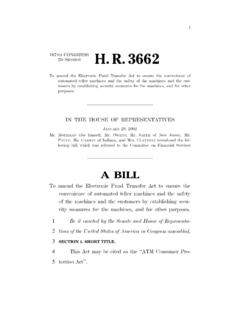 To amend the Electronic Fund Transfer Act to ensure the convenience of automated teller machines and the safety of the machines and the customers by establishing secu-rity measures for the machines, and for other purposes. 1 Be it enacted by the Senate and House of Representa-

Police Use of Force in New York City: Findings and ...

POLICE USE OF FORCE IN NEW YORK CITY: FINDINGS AND RECOMMENDATIONS ON NYPD’S POLICIES AND PRACTICES OCTOBER 2015 Table of Contents I. Executive Summary and Introduction .....

Trends and Practices in Law Enforcement and …

Money Laundering Risks and E-Gaming: an …

4 EXECUTIVE SUMMARY This report reviews the threat that money laundering through the e-gaming industry presents and could plausibly present to society, and the ways in which the regulated e-gaming industry discharges its duty to