3 Devil's Claw is the most commonly used name for the plant Harpagophytum. Another common English name for Devil's Claw is Grapple Plant, because the form of the fruit resembles a hook which is designed to protect the plant against animals. Its botanical name is derived from the Greek harpago'' meaning grappling hook.'' The nature of its name originates from the hooked, claw-like seed pods attached to the flowers. This genus is comprised of two species: Harpagophytum procumbens (with two subspecies, procumbens and transvaalensis) and Harpagophytum zeyheri (with three subspecies, zeyheri, sublobatum and schiiffii).

4 The two species occur in south Africa. In H. procumbens, the arms on the fruit are longer than the width of the fruit, while they are as long as or shorter than the width of the fruit in the other species, H. zeyheri. Harpagophytum procumbens is a native plant of Southern Africa, particularly in south 1. Africa (Kalahari region, Namibia and Botswana). It has been harvested traditionally for at least several hundred years and has been exported internationally for about fifty years. 2. Origin and distribution Devil's Claw is indigenous to Southern Africa and was introduced into Europe where the dried roots have been used to restore appetite, relieve heartburn, and reduce pain and inflammation.

5 Devil's Claw is found in the sandy Kalahari areas of Namibia, Botswana and south Africa, and to a lesser extent Angola, Zambia, Zimbabwe and Mozambique. 3. PRODUCTION levels south Africa In 2002, the first plantations in south Africa and Namibia, the home of the Devil's Claw, were so successful that it was possible to plant 250 000 seedlings on a large scale in 2003. Harvesting took place in June 2004, when around 40 metric tons of Harpagophytum procumbens were collected. Internationally Namibia is the largest supplier of Devil's Claw in the world, providing at least 90% or more of the product worldwide, followed by Botswana, Angola and Zambia but they supply smaller quantities.

6 Namibia exported a total of more than 9 500 tons to Euro- pean markets between 1992 and 2013, with average exports of approximately 435. tons per year, between 2001 and 2013. Countries such as France, Italy, Germany, Poland, Spain and south Africa have been reported as the largest importers of Devil's Claw from Namibia between 2009. and 2013. In total, 12 countries imported Devil's Claw from Namibia during this pe- riod. The above mentioned countries all imported 100 tons or more in total while the 'other'' countries, Switzerland, China, Brazil, south Korea, United Kingdom and the United States imported less than 100 tons in total.

7 4. Major PRODUCTION areas in south Africa Devil's Claw is found in the Northern Cape, North West and Limpopo provinces of south Africa and commercial harvesting of the plant currently takes place in the North West province and to a very limited extent in the Northern Cape. 5. Description 2. Mature plant Devil's Claw is a prostrate, mat-forming perennial herb, considered as a weed. It is a herbaceous plant that can grow up to 1,5 m in length. Stem The plant has creeping annual stems of up to 2 m long, spreading from a tuberous fleshy rootstock. They have many hollow branches and are covered with glandular hairs which exude a slimy, sticky sap.

8 Roots Devil's Claw has a strong central taproot and secondary root tubers (storage roots). branching off horizontally. The roots can be up to 50 cm in length and found up to 2 m deep and the secondary storage roots are up to 25 cm long and 6 cm. The plant can store up to 90% water in these storage roots. It is these storage roots that are used medicinally. It has secondary roots, called tubers that grow out of the main roots. Its tubers grow off its taproot and are shaped like elongated sweet potatoes. Although the name comes from the fruit, the part of the plant used for its medicinal value is the tuber.

9 Leaves The weedy plant has grey or green leaves. The leaves are large and heart-shaped. The opposite leaves of Devil's Claw are blue-greyish-green and irregularly divided into several lobes. Flowers Flowers and leaves can only be found during the rainy season. The tubular flowers are dark violet with a yellow and white throat. The plants flower mainly from about November to April (summer). Fruit From the flowers grow woody, sharply curved, sticky, barbed fruit, which give Devil's Claw its name. The characteristic fruit have numerous long arms with sharp, hooked thorns, as well as two straight thorns on the upper surface.

10 The fruit looks like a giant claw. Essential part The roots are the essential part of the Devils' Claw plant. 3. 6. Climatic requirements Temperature Devil's Claw grow well in temperatures between 17 C and 30 C. Optimum soil tem- peratures needed for germination vary depending on species. Water Watering should be done in October but rainfall from 1 October of 50 mm to 100. mm is preferable. In regions like the Kalahari region, an average amount of 200 mm of rain is more than enough for the Devil's Claw. After seedlings have appeared, allow the surface of the soil to dry between watering. 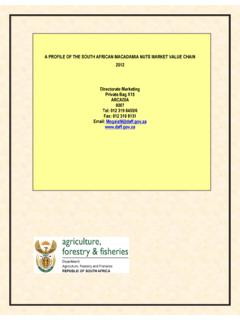 A PROFILE OF THE SOUTH AFRICAN MACADAMIA …

1. DESCRIPTION OF THE INDUSTRY Macadamia nuts are quickly becoming an important crop in South Africa and are possibly the fastest growing tree crop industry in … 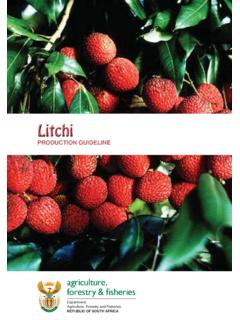 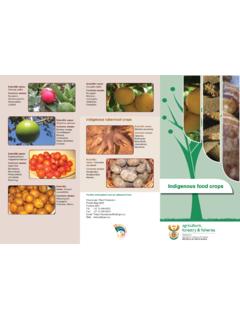 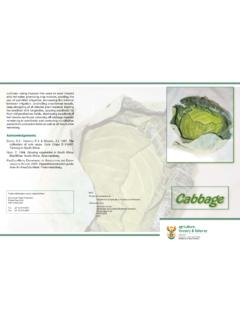 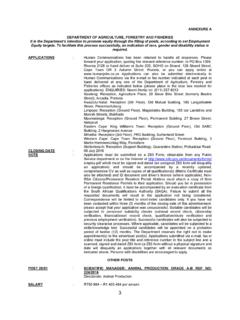 ANNEXURE A DEPARTMENT OF AGRICULTURE, …

3 ANNEXURE A DEPARTMENT OF AGRICULTURE, FORESTRY AND FISHERIES It is the Department’s intention to promote equity through the filling of …