iv EXECUTIVE SUMMARY Objectives To examine an organ blower box lined with asbestos and to gain information regarding the use of asbestos in this type of product and the type of asbestos containing material used.

2 10. iii EXECUTIVE SUMMARY. Objectives To examine an organ blower box lined with asbestos and to gain information regarding the use of asbestos in this type of product and the type of asbestos containing material used. To ascertain the level and type of asbestos fibre contamination in organ pipes following use of the above organ blower box for many years at St. Mary's church in Hunton, Maidstone. To offer advice regarding the future use of the church organ and the risk of exposure of the general public to asbestos fibres Main Findings The organ blower box removed from St. Mary's church in Hunton, Maidstone was identified as being lined with friable asbestos insulation board, measuring approximately one inch in thickness, on all of the internal surfaces.

3 The asbestos fibres found to be present in the insulation board were identified by the use of PLM (Polarised Light Microscopy) analysis as amosite, chrysotile and crocidolite asbestos . It was necessary to establish the level of contamination (if any) inside the organ pipes that were fed with air from the asbestos lined organ blower box and so the dust from inside the pipes was sucked onto cellulose acetate filters and was analysed using PLM and PCM (Phase Contrast Microscopy) methods. The floor and other surface areas surrounding the organ were also sampled and the dust was collected, this was also analysed using PLM again to determine the presence of asbestos fibres. The sampling that was carried out used static sampling methods as the organ blower had already been removed.

4 Two of the areas that were sampled were found to have minimal levels of asbestos fibres present, these were the floor area where the blower box was removed from and the inside of the wind trunk. The fibres identified in these areas were amosite on the floor area behind the organ and amosite and chrysotile inside the wind trunk. Recommendations The area surrounding the organ should be re-cleaned to eliminate any remaining asbestos fibres. Further sampling is necessary once a non- asbestos containing organ blower has been re- installed. This will enable us to determine the residual fibre release whilst the blower and the organ are functional and will involve air sampling of any potential dust that is released from inside the organ pipes whilst the organ is being played.

5 Iv 1 INTRODUCTION. HSL (Inorganics and Fibres Section) were asked to investigate the possible asbestos fibre release from church organ blower boxes. The work was carried out for Maidstone Borough Council under the Local Authority Science & Technology Project and began following concerns raised by the church committee at St. Mary's church in Hunton, Maidstone. The primary concern was that an organ blower box had been in use in the church for a number of years was lined with an asbestos containing material, and that some of the fibres from the organ blower box may have been released into the pipes of the church organ and consequently into the main area of the church. The organ blower had been removed before any sampling could be carried out in situ, therefore the investigation involved an analysis of the asbestos containing material inside the organ blower box and also various methods of sampling at the church.

6 The sampling carried out at the church was in order to ascertain if any asbestos fibres could be identified in the areas surrounding the church organ, this included the organ pipes, the area where the blower box was removed from and also the areas in front of the organ. Initial investigations involved an examination of the blower box in controlled conditions and the removal of a sample of the material lining the blower box for asbestos analysis, using Polarised Light Microscopy (PLM). Following the initial analysis, sampling was carried out at the church in Hunton, Maidstone, to conclude if there were any fibres that could be identified inside the organ pipes and in the areas of the church surrounding the organ. 1. 2 FURTHER SECTIONS. INITIAL EXAMINATION OF BLOWER BOX.

7 Because of the risks of the spread of and exposure to asbestos fibres this work was carried out inside a sealed chamber and the scientists carrying out these examinations wore respiratory protection (RPE), disposable coveralls and took full precautions against the spread of asbestos . The blower box, a one-metre cube weighing about 500 kg, was received sealed in plastic and labelled as containing asbestos . On removing the plastic and tilting the box to examine the underside, loose asbestos was seen to fall from the box onto the plastic sheet on which it was standing. This dust had fallen through a 3-inch rectangular hole running the full width of the floor of the box (photograph A3). PLM (Polarised Light Microscopy) analysis of this dry and friable dust found it to contain, crocidolite, amosite and chrysotile asbestos .

8 A series of photographs were taken showing the construction of the box and the major components of the blower. These are included in appendix as photographs A1 A7. From the photographs it can be observed that all of the walls are lined with asbestos insulation boards measuring approximately one inch in thickness. It is thought that the blower boxes were lined with these boards to act as a heat or fire-guard and also to suppress the noise of the motor and blower. The presence of asbestos and the need to take appropriate precautions including the use of powered RPE restricted the possible testing options. Under the circumstances it was not feasible to power up the blower box and monitor airborne fibre emissions as this would have required an electrician (who was fully trained to work with asbestos using protective equipment and risk assessed operations), to re-connect the organ blower box to an air movement system which would simulate the use of the blower box when powering a church organ.

9 The risk of exposure to asbestos fibres in relation to the testing options was assessed and the outcome was that due to the nature of the asbestos containing material discovered in the blower box, the possibility of fibre release both in terms of asbestos fibre type and friability was too high. The risk to health was too great to pursue any moving air sampling using the organ blower box. Some airborne fibre generation is highly likely within the blower box but how much, if any, of this airborne material would be emitted into the church environment (or other surrounds) is unclear as the elutriation effects of the pipes connecting it to the organ and the organ pipes themselves would, in all probability, drastically modify airborne fibre releases. Consequently it is unlikely any measurements from the output of the box would be of any significance.

10 2. HOW THE BLOWER BOX WORKS. Air is drawn into the box through the rectangular opening (~10 x 80 cm) underneath the box, which is supported by four feet' (~ 2 x 10 cm) that raise it slightly from the floor on which it would rest. The air then moves into the blower and is expelled through the smaller hole via a flexible coupling in the side of the box into the organ pipes. The organ blower was not in a functioning state when received and was not operated at HSL. The organ blower box had been removed from the site by an external company and following initial examination of the box and lining material the asbestos content and friability of the material it was concluded unsafe to test. PLM (POLARISED LIGHT MICROSCOPY) ANALYSIS. The insulation material from the inside of the organ blower box was examined using Stereozoom and PLM (Polarised Light Microscopy) microscopy and a sub-sample was analysed for asbestos content to a UKAS accredited standard using the method in HSG248 asbestos : The analyst's guide for sampling, analysis and clearance procedures1.

Asbestos – a group of minerals that includes chrysotile, crocidolite, amosite, anthophyllite, tremolite and actinolite – is one of the most 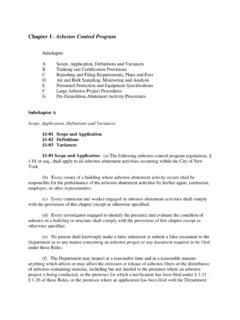 Asbestos. “Asbestos” shall mean any hydrated mineral silicate separable into commercially usable fibers, including but not limited to chrysotile (serpentine), amosite 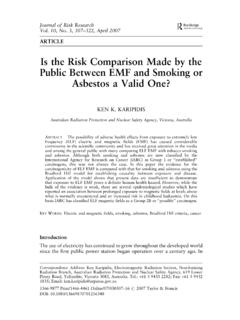 Is the Risk Comparison Made by the Public Between …

ARTICLE Is the Risk Comparison Made by the Public Between EMF and Smoking or Asbestos a Valid One? KEN K. KARIPIDIS Australian Radiation Protection and Nuclear Safety Agency, Victoria, Australia

Control of Asbestos Regulations 2012 - Health and …