3 In India, the CR sector has been gradually strengthened since 2006, when the new CR Policy opened airwaves to non profit organizations. At this point, there is a need to ascertain to what extent CR is the authentic voice of COMMUNITY . Best examples of operating COMMUNITY RADIO in India. RADIO Namaskar, based in Konark (Orissa) and established by Young India NGO. with the support of UNESCO, which provided the transmitter;. RADIO Dhadkan, based in Shivpuri (Madhya Pradesh) and run by Sambhav NGO. in partnership with UNICEF. Sangham RADIO (Pastapur, Medak District, Andhra Pradesh). RADIO Bundelkhand (Orchha, Madhya Pradesh). Mann Deshi Tarang (Satara, Maharashtra). Namma Dhwani (Budhikote, Karnataka), claims to be India's first cable COMMUNITY RADIO station and has recently started airing as Namma Dhwani' after having broadcast licence. It is a partnership effort of the Budhikote COMMUNITY , and NGOs MYRADA and VOICES. UNESCO has funded equipment and capacity building support.

4 RADIO Mattoli (Wayanad, Kerala). Kalanjiam Samuga Vanoli (Nagapattinam, Tamil Nadu). Barefoot (Tilonia, Rajasthan). Kunjal Panchi Kutchji (Saras Crane of our Kutch), Gujarat State. Mandakini Ki Awaaz (Voice of Mandakini), Uttarkhand State. Kelu Sakhi (Listen, Friend), Karnataka State. Chala Ho Gaon Mein' that is broadcast once a week on an AIR station in the Palamau district of Jharkhand Findings RADIO Namaskar case study reveals that public actions are not only induced by a spontaneous' conscientization process, but is sometimes directly boosted by CR. Thus, if we understand Communication for Social Change as a process of dialogue, through which people define their needs and decide steps to be taken in order to empower their own lives (Parks et al., 2005). 3. 'Chala Ho Gaon Mein' is indeed a unique experiment in using media technologies, especially RADIO , for development and empowerment of marginalised, rural communities. Designed as a COMMUNITY -driven PROJECT , it takes on a special significance in an economically deprived area, marked by illiteracy and the relatively indifferent attitude of the state as well as the mainstream media towards the problems of the region.

5 Within a short time, the programme has generated a great deal of enthusiasm among the people. Listeners not only feel that the programme is geographically and culturally more intimate to their lives, but also gradually, a sense of attachment to the programme is beginning to build up. Suppressed local artistic talents have come to the fore, women caught up within feudal social structures are beginning, albeit very slowly, to find a voice of their own, and there is a sense of optimism that the RADIO programme would help solve many of the intractable problems of the people. Kunjal Panchi Kutchji (Saras Crane of our Kutch), Gujarat State case study reveals that a much-discussed COMMUNITY RADIO programme, the Kunjal Panchi Kutchji reinforces a long-lasting partnership between a non-government women's organisation Kutch Mahila Vikas Sangathan (Kutch Women's Development Organisation), mainstream All India RADIO and a number of non-government organisations devoted to development communication, especially UNDP and Government of India.

6 While the programmes are in Kutchi, the local dialect, it focuses on the participation of women in the political process, especially village level panchayats. Kunjal Panje Kutchji is a sponsored programme and supported by several external and government agencies. New themes and programmes have been added over the last seven years. Over a period of time, professional and voluntary organisations got associated with KMVS and made significant contributions in training RADIO reporters and programme producers. Kunjal Panje Kutchji has sustained for a long time due to continuous external support by national and international agencies, including industry. There have been cases when programmes have had to be suspended due to lack of timely support. Yet, the programme continues to be popular, and its audiences have grown many fold. What Kunjal Panje Kutchji has actually demonstrated is that even without actual COMMUNITY RADIO , it is possible to use mainstream RADIO for the development goals of the COMMUNITY .

7 Now named as RADIO Ujjas (Means light). COMMUNITY RADIO continue to broadcast development programmes far a large rural women listeners. 4. Namma Dhwani (Our Voices) , Karnataka State case study shows that the activities related to production of programmes are centred in the village of Budhikote in Kolar, Karnataka State. Namma Dhwani started broadcasts in March 2003 with the aim of expanding Namma Dhwani's reach, loudspeaker broadcast was also started in three other villages in collaboration with local resource centres. This expansion has become a regular income-generating activity. The listeners of COMMUNITY RADIO are illiterate women, who otherwise have little access to information. Over the last few years, a number of capacity building programmes have been carried out with the help of NGOs. Nair (2007. as referred in Agrawal 2008) reported that in Budhikote, regular monthly feedback surveys have revealed that about 60. per cent of listeners prefer to listen to Namma Dhwani on television, rather than RADIO .

8 Namma Dhwani has been earning revenue through local RADIO advertisements, and it is expected that its growing popularity would augment its income. Therefore, overall, it could be said that Namma Dhwani is yet to become a true COMMUNITY RADIO , though it demonstrates all characteristics of COMMUNITY RADIO . Mandakini Ki Awaaz (Voice of Mandakini), Uttarkhand State- It reaches the listeners of the Mandakini river valley in Uttarkhand State. COMMUNITY RADIO case study reveals that their programme has helped address specific information needs of rural audience, and to some extent, the audience feel empowered to develop ways to improve their lives through collective knowledge and discourse . (Ideosync Media Combine Voice of Mandakini has been externally supported by international donors like UNESCO, and the NGOs who support the PROJECT . Kelu Sakhi (Listen, Friend), Karnataka State started its broadcast in December 2006. It is a collaborative COMMUNITY RADIO broadcast PROJECT undertaken jointly by IT for Change, Bangalore, Mahila Samakhya Karnataka (A grassroots organisation set up by Govt.))

9 Of India for women's empowerment) and Commonwealth Educational Media Centre for Asia/Commonwealth of Learning. Kelu Sakhi is broadcast to educate poor and illiterate rural women through information and knowledge. It is broadcast through a slot in the RADIO station, Gyan Vani, of the Karnataka State Open University. The programme content includes women's education, health, political institutions and capacity building/self-sufficiency which broadly fall within Mahila Samakhya's development goals. CEMCA has played a crucial role in capacity building of Kelu Sakhi through research, production and training. CEMCA also helped in identifying the information needs of the target audience and in programme 5. planning. Kelu Sakhi has provided an opportunity for rural women to listen to their own voices on this RADIO broadcast, meant for education and entertainment. Kelu Sakhi was perceived as a programme meant for Mahila Samakhya women and not for other women of the COMMUNITY (Raghaviah 2007:25).

10 In world, there are many successful examples of COMMUNITY RADIO along with Southeast Asia. Some of them are as follows Sri Lanka's Kothmale COMMUNITY RADIO Internet PROJECT Findings Overall, the Kothmale RADIO Internet PROJECT has provided easy access to information for its COMMUNITY members. Increased participation and a sense of ownership among the audience have made the RADIO station an important part of the COMMUNITY , and have facilitated the organization of events, exhibitions, and discussions about local needs. Information access and increased COMMUNITY participation can be regarded as major forces behind the success of the PROJECT . Indonesia's Jaringan RADIO Komunitas Yogyakarta COMMUNITY RADIO Jaringan RADIO Komunitas Yogyakarta shows that COMMUNITY RADIO has become media alternative for grass-roots people. COMMUNITY RADIO is used to serve people by providing a forum for expressing their interests without ignoring cultural identity building.

THE NATIONAL INSTITUTE OF HEALTH AND … 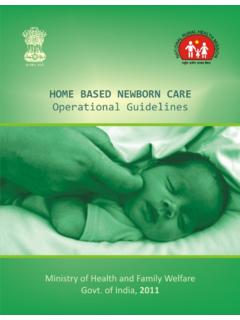 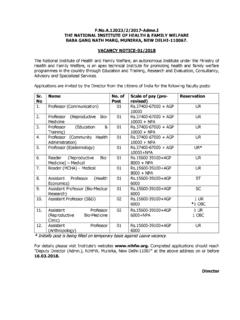 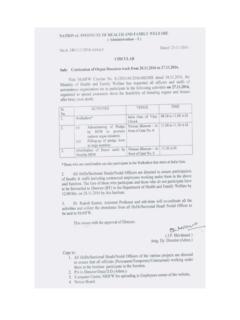 Faculty Members may be constituted in the institute to review the budget proposal for ... of the Karnataka State Open University. The programme content includes women’s education, health, political institutions and capacity ... Jaringan Radio Komunitas Yogyakarta shows that community radio has become media 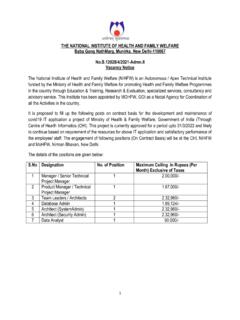 THE NATIONAL INSTITUTE OF HEALTH AND FAMILY …

Job Description / Roles or Responsibilities Data Analyst will keep the COVID application confidential data and information according to guidelines. The goal is to provide: Managing and designing the reporting environment, including data sources, security, and metadata. Supporting initiatives for data integrity and normalization. 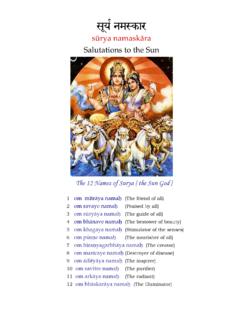 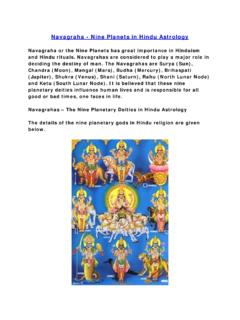 Navagraha - Nine Planets in Hindu Astrology Navagraha or the Nine Planets has great importance in Hinduism and Hindu rituals. Navagrahas are considered to play a major role in 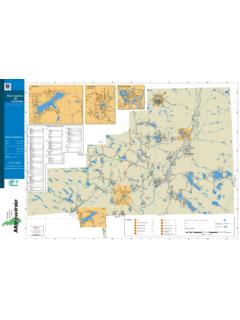 Copyright 1998-2009 Sri Venkateswara Temple and Community Center You are going to enter one of the most Beautiful Hindu temples in North America.