Promoting gender equality and women 's empowerment in fisheries and aquaculture Why consider gender issues in the fisheries sector? In the fisheries sector, men and women engage in distinct and often complementary activities that are strongly influenced by the social, cultural and economic contexts they live in. Male-female relations vary greatly and are based on economic status, power relations, and access to productive resources and services. In most regions, fish catching is male-dominated. Ocean-going boats for offshore and deep-sea fishing have male crews, while in coastal artisanal fishing communities women often manage smaller boats and canoes. women are mostly responsible for skilled and time-consuming onshore tasks, such as making and mending nets, processing and marketing catches, and providing services to the boats.

4 How can we promote gender equality and empower women in the fisheries sector? Both women and men must be accorded equal rights and be able to

1 Promoting gender equality and women 's empowerment in fisheries and aquaculture Why consider gender issues in the fisheries sector? In the fisheries sector, men and women engage in distinct and often complementary activities that are strongly influenced by the social, cultural and economic contexts they live in. Male-female relations vary greatly and are based on economic status, power relations, and access to productive resources and services. In most regions, fish catching is male-dominated. Ocean-going boats for offshore and deep-sea fishing have male crews, while in coastal artisanal fishing communities women often manage smaller boats and canoes. women are mostly responsible for skilled and time-consuming onshore tasks, such as making and mending nets, processing and marketing catches, and providing services to the boats.

2 In western Africa and Asia, as much as 60 percent of seafood is marketed by FAO/Jennifer Gee women , and in many parts of the world they also do a significant amount of shellfish gathering/clam gleaning a fishery activity that is often under-recognized, or not recognized at all. A woman sorting the catch at the dock in Muscat. Sectoral statistical systems (such as those for fisheries) commonly fail to capture these broader contributions to livelihoods, nor do they Introduction consider women 's engagement in fishery/shellfish harvesting activities This fact sheet presents an overview of current gender equality and women 's empowerment issues in the fisheries sector. women 's Employment in the fisheries sector engagement in fisheries can be viewed from social, political and According to The State of World Fisheries and Aquaculture technical perspectives, all of which show that the role of women is often published in 2016 by FAO, in the period 2005 2014, the quality underestimated.

3 This inadequate recognition of women 's contributions and frequency of reporting on engagement by gender improved hampers the sustainable development process, resulting in increased slowly. It is estimated that, overall, women accounted for more poverty and food insecurity. than 19 percent of all people directly engaged in the fisheries and aquaculture primary sector in 2014. A recent publication estimates This fact sheet provides information on policy, institutions and planning that, globally, when primary and secondary fisheries sector processes; statistical dimensions in gender analysis; and specific engagements are combined, women make up half of the workforce. concerns in the field of fisheries industries.

4 It identifies lessons learned As reporting improves and policies directed at increasing women 's and opportunities for gender mainstreaming at macro, meso and micro- decision-making capacities in the sector develop, it is expected operational levels. that both reporting and actual engagement of women in the The information provided does not represent an exhaustive analysis sector will increase. FAO estimates that, overall, fisheries and of the subject, but suggests some relevant approaches for continuing aquaculture assure the livelihoods of 10 12 percent of the world's the efforts made over the years in light of women 's crucial role in population (FAO, 2014b). sustainable fisheries and aquaculture development.

5 1. (as the products are often not sold through a formal market system, may not be of high value, or may be used for home consumption). In addition, women may not self-report/identify as being fishers even though they are engaged in these activities. In fisheries value chains men and women have distinct roles, and their socio-economic status influences their power relations. women and men can have dominant roles, or they can be in positions of high dependency. women constitute about half the population involved in fisheries development activities. In some developing regions women have become important fish entrepreneurs who control significant amounts of money, finance a variety of fish-based enterprises, and generate substantial returns for households and communities.

6 Worldwide, the fisheries and aquaculture sector provides direct employment and revenue to an estimated 180 million or more people. Selling fish at the market in Lisbon, Portugal. In certain countrie s of West Africa ( Ghana, the Niger, Benin and the Gambia), women are traditionally engaged in low-paid jobs, such as unloading the day's catch to be carried to the beach or fish-smoking In aquaculture, women often carry out most of the work of feeding, huts; drying and processing the fish; and converting fish waste into harvesting and processing fish and shellfish. They can become managers useful products. of small household enterprises, such as fish ponds, and thus improve Compared with men, women often face more problems related to their families' income and nutrition.

7 However, women tend to have limited technology, finance for enterprise expansion, and transport. Their plight control over ponds and inputs for aquaculture, so they rarely participate is worsened at the market level where they encounter price fluctuations in production beyond satisfying their household needs. When aquaculture for their products, or where social and/or cultural pressures limit their production intensifies, it increases the labour burdens on women and market opportunities to locations that are close to home. If women youth, affecting their production, productivity and welfare. are able to access local markets, they may still be unable to access As most fisheries activities are seasonal and influenced by the status the national or global markets that men have access to.

8 They often of the resources, many fishing communities have diversified their assume responsibility for their families' daily subsistence needs, which livelihoods. Depending on the status of their household, women and sometimes drastically depletes their working capital. men engage in other economic activities such as vegetable gardening or In the inland fisheries of many countries women are engaged in fishing farming to augment their family incomes, as is seen in Benin, Cambodia, and are taking a leading role in the rapid growth of aquaculture. the Congo, Ghana, Nigeria and Thailand. They own and manage fishing boats and have their own fishing gear. women mayors of villages Considering children in gender approaches in the Philippines to ensure nutrition and education In the coastal areas of the Philippines, people have distinct A five-year GEF-FAO Western Africa project under the Coastal gender roles similar to those in many African and Asian countries.

9 Fisheries Initiative was carried out in coastal fisheries communities For example, in Batan Bay, women are prohibited from stepping of Cabo Verde, C te d'Ivoire and Senegal, making special efforts onto fishing boats, which limits their access to fisheries. women to integrate women 's fisherfolk organizations. Although men are onshore, however, have access to fisheries and are even given high primarily engaged in fishing and mending the boats and nets, it is positions. The Barangay, or fishing villages, have both men and women who put in long hours once the fish is landed and brought women mayors. The village associations consist of many women to shore. In C te d'Ivoire, women 's fisherfolk associations have set who participate in decision-making.

10 This situation explains why the up day care centres to lessen the burden of child care for mothers Philippines has the lowest gender -gap score in Asia, according to a of young children while they are cleaning, smoking and selling 2013 report from the World Economic Forum. the fish. These centres are also available for school-age children, who receive a nutritious meal and stay to do their homework while their mothers are at work. The associations also provide social assistance to many women undertaking a wide range of tasks to support their fishing households, in addition to more targeted entrepreneurial training for these women . 2. Impact of climate change and natural disasters The degradation of coastal marine resources ( reduced fish stock impacts on household income, as men's remittances can reduce and lagoon contamination) and decreased soil fertility affect the pressure on resources and offer new opportunities to exchange livelihood systems of men and women . 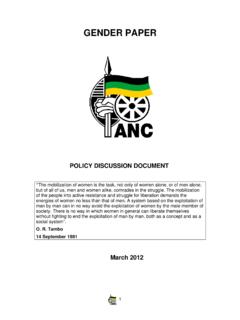 GENDER PAPER POLICY DISCUSSION DOCUMENT “The mobilization of women is the task, not only of women alone, or of men alone, but of all of us, men and women alike, comrades in the struggle. 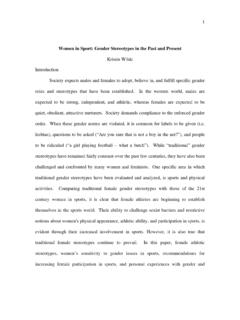 Women in Sport: Gender Stereotypes in the Past …

1. Women in Sport: Gender Stereotypes in the Past and Present . Kristin Wilde . Introduction . Society expects males and females to adopt, believe in, and fulfill specific gender

Sports, Women, Gender, Past, Stereotypes, Women in sport, Gender stereotypes in the past 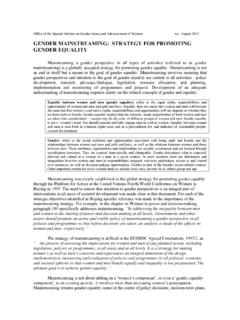