PRONOUNCEMENT . Unveiling of Tombstones HISTORICAL BACKGROUND. Since ancient times, it has been the custom to mark the grave with a stone or monument - after Rachel died, "Jacob erected a monument on Rachel's grave" (Genesis 35:20). The marker or monument serves to identify the grave so that relatives will find it when they visit, honour the memory of the deceased, and identify a place of burial so that kohanim (priests) will avoid it as required by Jewish law. Jewish tradition makes no stipulation as to the size or type of marker or monument, but most cemeteries have specific guidelines. The Jewish teaching that all are equal in death often serves as a guide to choosing an appropriate headstone. The marker usually includes: the English and Hebrew name of the deceased, the dates of birth and death in English and Hebrew, and the relationship to other family members ( , father/mother, husband/wife, grandfather/grandmother, sister/brother, etc.)

PRONOUNCEMENT Unveiling of Tombstones HISTORICAL BACKGROUND Since ancient times, it has been the custom to mark the grave with a stone or monument - …

1 PRONOUNCEMENT . Unveiling of Tombstones HISTORICAL BACKGROUND. Since ancient times, it has been the custom to mark the grave with a stone or monument - after Rachel died, "Jacob erected a monument on Rachel's grave" (Genesis 35:20). The marker or monument serves to identify the grave so that relatives will find it when they visit, honour the memory of the deceased, and identify a place of burial so that kohanim (priests) will avoid it as required by Jewish law. Jewish tradition makes no stipulation as to the size or type of marker or monument, but most cemeteries have specific guidelines. The Jewish teaching that all are equal in death often serves as a guide to choosing an appropriate headstone. The marker usually includes: the English and Hebrew name of the deceased, the dates of birth and death in English and Hebrew, and the relationship to other family members ( , father/mother, husband/wife, grandfather/grandmother, sister/brother, etc.)

2 Also, one often finds the Hebrew letters pay nun, standing for "po nikbar(ah), here is buried," and the letters tav, nun, tzadee, bet, hay standing for the phrase "May his/her soul be bound up in the bond of eternal life.". THE Unveiling CEREMONY. It is customary for the grave marker to be put in place and for an Unveiling ceremony to be held after the Kaddish period [11 months for parents and 30 days for other close relatives] is over, but no later than one year after the death. While many families wait until almost the full year has passed to do the Unveiling , it may be done sooner; in Israel the stone is usually placed soon after sheloshim [the first 30 days of mourning]. The Unveiling ceremony consists of the recitation of Psalms, a very brief eulogy encapsulating the most salient characteristics of the deceased, removing the cloth covering the headstone, the El Maleh Rahamim [God full of compassion - a prayer] and the Mourner's Kaddish[a prayer in praise of God recited by mourners].

3 Traditionally, Kaddish is not recited aloud if no minyan [quorum of 10] is present. It is customary before leaving the gravesite, to place a small stone on the marker to indicate that someone has visited the grave. This tradition may also reflect the biblical practice of marking the grave with a pile of stones. Or, it may be the end result of the custom of writing notes to the deceased and pushing them into crevices in the headstone just as notes are pushed into the Western Wall in Jerusalem. When no crevice could be found, the note was weighted down with a stone. In time, the paper disintegrated or blew away leaving only the stone. Thus, some began to think that the leaving of a stone was the custom - and so it became the custom.

4 THE VISITING OF GRAVES. While visitation of the grave is permitted at almost any time, excessive visits are discouraged. "The rabbis were apprehensive that frequent visiting to the cemetery might become a pattern of living thus preventing the bereaved from placing their dead in proper perspective" (The Jewish Way in Death and Mourning, Maurice Lamm, p. 192). It is considered especially appropriate to visit the graves of loved ones on the last day of shiva [the first seven days of intensive mourning] and the last day of sheloshim, on Yahrzeit [the yearly anniversary of a person's death], on Jewish fast days, and before or between the High Holy Days. Traditional Jews will often recite psalms while visiting, study a short passage from the Mishnah [an early rabbinic legal code], or recite "El Maleh Rahamim.

5 ". TRADITIONAL AFRICAN VIEW. At the heart of the rite of ancestor worship in African culture lays the African Traditional Religion. And to make it even more difficult, ATR is intertwined with African Culture in a broader sense. African Culture is a communal culture, a culture where the individual exist as result of the others. Taylor (1963:155) says: the African family is a single continuing unit, conscious of no radical distinction of being between the living and the dead . The individual's way of life is therefore dependant on that what is determined and predetermined by his/her ancestors and extended families. Amanze (1998:1) refers to the Tswana culture and then states: it is important first and foremost to understand Tswana traditional religion as a living faith among Batswana today.

6 The cultural practices within the broader African culture are, as it is with some other main cultures of the world, intertwined with practices in ATR. This is important as it would do injustice to our question at stake to try and see it as something standing on its own - something that can be theologically evaluated and dealt with accordingly. The Ancestors amongst the Sotho/Tswana/Shona people As this research has been done mainly under the Batswana, reference will be made in relation to their beliefs. The ancestors in the Tswana culture are known as BADIMO. BADIMO is the plural of the word MODIMO, which is generally used and translated for God . BADIMO has been called by MODIMO to be with him. But because MODIMO cannot be the people, he assigns this responsibility to the BADIMO.

7 To fulfill this task certain special powers have been assigned to the BADIMO. BADIMO is powerful but not all powerful. They are therefore the link between MODIMO and mankind, they provide guidance to people and they direct the lives of the African people (Dreyer & Mjwabe 1995:553; Amanze 1995:8; Mbiti 1971: 27,28). This thought links up with the ATR and African cultural thought that although a person has died he/she still needs to be cared for in the spirit world. This responsibility first lies with the closest family of the deceased. They need to visit the grave frequently. Offerings like bowl of food also need to be placed so that the ancestor will not get hungry in the other world. Communication with the deceased is also possible through the tradi- tional - and witchdoctor (Daneel 1973: 46,48; Amanze 1998:9).

8 Practices differ however from sub-culture to sub-culture. The Shona culture for instance approaches the ancestors during rain-rites. The whole community forms part of this passage when each head of family is given an amount of sorghum for the brewing of sorghum-beer. The beer is then thrown onto the graves of the ancestors while leaders are speaking to the ancestors through mediums. The great ancestor is only approached at specific times (Daneel 1973: 52-53). In the Tswana culture the ancestors mainly appear to the people in their dreams. Certain orders like the slaughtering of an animal or the drinking of beer is then conveyed (Amanze 1998:13; Dreyer & Mjwabe 1995:554). It is however during the funeral ceremony that ancestral practice is the most prominent.

9 One can miss anything but you cannot miss a funeral. Not only would you upset the family (because of the communal worldview), but you would definitely upset the deceased and the ancestors. The whole funeral-passage starts with prayer meetings during the days preceding the actual funeral. At the evening before the funeral the body of the deceased is taken to the house and kept in the room where the death has taken place. Candles are lit to keep the evil spirits away. Early the next morning the funeral takes place. After the funeral there is a meal at the deceased's house. From this it is evident that funerals are very time-consuming, tiring, emotional and expensive rites. One can actually refer to the Tswana-culture as a culture of funerals.

10 From the above discussion it has become now evident that COMMUNITY is practiced in many African cultures today. It forms such an integral part of the culture and lifestyle of the African people that a holistic approach is needed to make a proper evaluation. The ancestors in the Xhosa culture Izinyanya/amadlozi/badimo/vadzimo/abeZim u - refers to those who have died and joined the spiritual world. The departed from this world, the ancestors, are believed and felt to be the mediators between the living and the spiritual world. Death is not understood as the destruction of life. It is understood as partial physical sepa- ration from the living because ancestors sometimes reveal themselves to the members of the family. 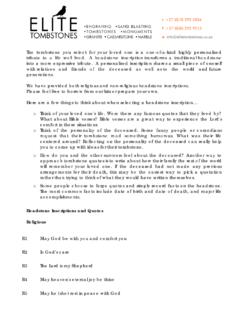 The tombstone you select for your loved one is a one-of-a-kind highly personalized tribute to a life well lived. A headstone inscription transforms a traditional headstone 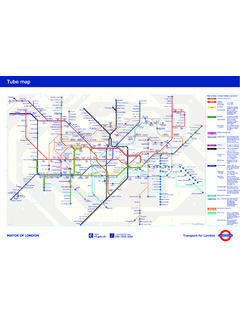 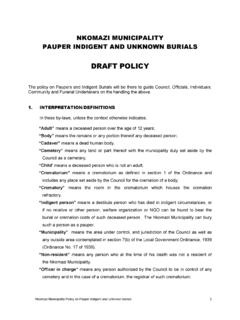 Nkomazi Municipality Policy on Pauper Indigent and Unknown burials 3 3. PAUPER AND INDIGENT BURIALS A pauper is defined as a person who …