2 A notice statute protects a subsequent purchaser or lienholder who acquires an interest without notice of a prior unrecorded conveyance or lien, regardless of when the

2 At common law in England, there Editorial Board proposes to add nine new was no system of registration or recording, TEXAS TITLE Standards: Standards and the rule between claimants of the same through , inclusive. TITLE was found in the maxim prior in tempore potior est in jure,' which means, he Please study these PROPOSED changes who is first in time has the better right.. together with the PROPOSED comments and 2 Maurice Merrill, Merrill on Notice 921. cautions. The TITLE EXAMINATION Standards (Vernon 1952).

3 This is still the law except as Board requests and encourages you to abrogated by statute. Thus, as between submit your comments to the Board so that claimants who are not entitled to the special this work will be refined before it is protections conferred by recording statutes, submitted for final adoption and the first in time is first in right. promulgation. Types of Recording Statutes: In We would also appreciate any general, recording statutes limit the first-in- recommendations that you may have to time, first-in-right rule and were enacted to amend or augment the existing Standards.

4 Protect a bona fide purchaser, as defined in Please send your comments and the comments to Standard , including a suggestions by June 15, 2013, to: lienholder , who is without notice of prior unrecorded claims to real property. Three Edward H. Hill, Chair basic types of recording systems are TEXAS TITLE EXAMINATION Standards recognized in the United States: race, race- Editorial Board notice, and notice. 3909 Doris Drive Amarillo, TX 79109 A race statute provides that a purchaser or lienholder who is second in time of conveyance prevails if she records first, [To be inserted after Standard ] regardless of whether that person has notice of other unrecorded interests.

5 Standard Notice Recording System Under a race-notice statute, the Because TEXAS has a notice subsequent purchaser or lienholder must recordation statute, an examiner must not acquire an interest without notice of the assume that the order of filing or recording prior unrecorded interest and also must file of competing instruments establishes for record before recordation of the prior priority of right or that unrecorded unrecorded interest . instruments are subordinate to recorded instruments. 1. A notice statute protects a subsequent Filing and Recording: A paper purchaser or lienholder who acquires an document filed for record may not be validly interest without notice of a prior unrecorded recorded or serve as notice of the paper conveyance or lien, regardless of when the document unless: (1) the paper document subsequent purchaser's deed is recorded, if contains an original signature or signatures ever.

7 Tex. Prop. Code How A Notice Recordation Statute Ann. An original signature is not Operates: Under a notice statute, if the required for an electronic document that subsequent instrument is executed and complies with the requirements of delivered before the prior instrument is filed Chapter 15, Tex. Prop. Code Ann. (Uniform for record and if the subsequent purchaser Real Property Electronic Recording Act);. or lienholder pays value and has no notice Chapter 195, Tex. Loc. Gov't Code Ann. of the prior instrument, then the subsequent (electronic filing of records); Chapter 322, instrument prevails regardless of whether Tex.

9 Evid. Rules 902(4). Matthews v. Houston Oil Co., 299 450. (Tex. Civ. App. Beaumont 1927, no writ); An instrument meeting the requirements Raposa v. Johnson, 693 43 (Tex. of the preceding paragraph imparts App. Ft. Worth 1985, writ ref'd ). For constructive notice upon filing. An example, assume that Homeowner grants instrument is filed when deposited for that an oil and gas lease on February 1 to A, purpose in the county clerk's office, together who does not file for record. Thereafter, with the proper recording fees.

10 Jones v. Homeowner gives another oil and gas lease Macorquodale, 218 59, 61 (Tex. Civ. to B, a bona fide purchaser, as defined in App. Galveston 1919, writ ref'd). Tex. Loc. the comments to Standard , on Gov't Code Ann. The county February 5. As between A and B, B prevails clerk [is] not authorized to impose regardless of whether either A or B records. additional requirements' for filing or And, under TEXAS case law, if A assigned recording a legal paper such as the removal his lease to C on February 10, B would also of irrelevant notations. 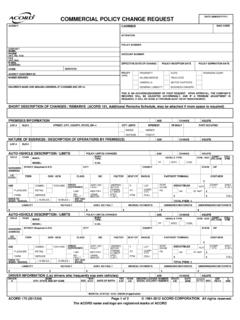 The ACORD name and logo are registered marks of ACORD SHORT DESCRIPTION OF CHANGES / REMARKS (ACORD 101, Additional Remarks Schedule, may be attached if more space is required) 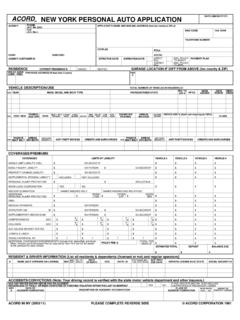 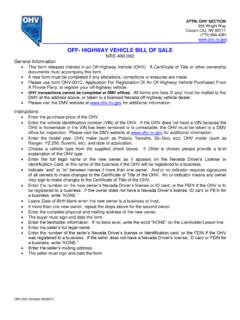 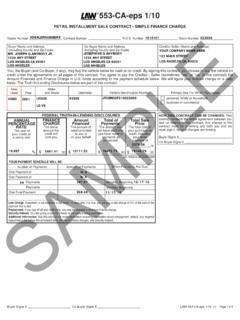 XDEALERNUMBERX RETAIL INSTALLMENT SALE CONTRACT - SIMPLE FINANCE CHARGE Dealer Number You, the Buyer (and Co-Buyer, if any), may buy the vehicle below for cash or on credit.