5 harmful practices which endanger the health and general well-being of women; c) integrate a gender perspective in their policy decisions, legislation, development plans, programmes and activities

2 FURTHER CONSIDERING that Article 18 of the African Charter on Human and Peoples' Rights calls on all States Parties to eliminate every discrimination against Women and to ensure the protection of the Rights of Women as stipulated in international declarations and conventions;. NOTING that Articles 60 and 61 of the African Charter on Human and Peoples' Rights recognise regional and international human Rights instruments and African practices consiste nt with international norms on human and peoples' Rights as being important reference points for the application and interpretation of the African Charter;. RECALLING that Women 's Rights have been recognised and guaranteed in all international human Rights instruments, notably the Universal Declaration of Human Rights , the International Covenant on Civil and Political Rights , the International Covenant on Economic, Social and Cultural Rights , the Convention on the Elimination of All Forms of Discrimination Against Women and its Optional Protocol , the 2.

3 African Charter on the Rights and Welfare of the Child, and all other international and regional conventions and covenants relating to the Rights of Women as being inalienable, interdependent and indivisible human Rights ;. NOTING that Women 's Rights and Women 's essential role in development, have been reaffirmed in the United Nations Plans of Action on the Environment and Development in 1992, on Human Rights in 1993, on Population and Development in 1994 and on Social Development in 1995;. RECALLING ALSO United Nations Security Council's Resolution 1325. (2000) on the role of Women in promoting peace and security;. REAFFIRMING the principle of promoting gender equality as enshrined in the Constitutive Act of the African Union as well as the New Partnership for Africa's Development, relevant Declarations, Resolutions and Decisions, which underline the commitment of the African States to ensure the full participation of African Women as equal partners in Africa's development.

4 FURTHER NOTING that the African Platform for Action and the Dakar Declaration of 1994 and the Beijing Platform for Action of 1995 call on all Member States of the United Nations, which have made a solemn commitment to implement them, to take concrete steps to give greater attention to the human Rights of Women in order to eliminate all forms of discrimination and of gender -based violence against Women ;. RECOGNISING the crucial role of Women in the preservation of African values based on the principles of equality, peace, freedom, dignity, justice, solidarity and democracy;. BEARING IN MIND related Resolutions, Declarations, Recommendations, Decisions, Conventions and other Regional and Sub-Regional Instruments aimed at eliminating all forms of discrimination and at promoting equality between Women and men;. CONCERNED that despite the ratification of the African Charter on Human and Peoples' Rights and other international human Rights instruments by the majority of States Parties, and their solemn 3.

5 Commitment to eliminate all forms of discrimination and harmful practices against Women , Women in Africa still continue to be victims of discrimination and harmful practices;. FIRMLY CONVINCED that any practice that hinders or endangers the normal growth and affects the physical and psychological development of Women and girls should be condemned and eliminated;. DETERMINED to ensure that the Rights of Women are promoted, realised and protected in order to enable them to enjoy fully all their human Rights ;. HAVE AGREED AS FOLLOWS: Article 1. Definitions For the purpose of the present Protocol : a) "African Charter" means the African Charter on Human and Peoples' Rights ;. b) "African Commission" means the African Commission on Human and Peoples' Rights ;. c) "Assembly" means the Assembly of Heads of State and Government of the African Union;. d) AU means the African Union;. e) Constitutive Act'' means the Constitutive Act of the African Union;. f) "Discrimination against Women " means any distinction, exclusion or restriction or any differential treatment based on sex and whose objectives or effects compromise or destroy the recognition, enjoyment or the exercise by 4.

6 Women , regardless of their marital status, of human Rights and fundamental freedoms in all spheres of life;. g) "Harmful Practices" means all behaviour, attitudes and/or practices which negatively affect the fundamental Rights of Women and girls, such as their right to life, health, dignity, education and physical integrity;. h) NEPAD'' means the New Partnership for Africa's Development established by the Assembly;. i) "States Parties" means the States Parties to this Protocol ;. j) "Violence against Women " means all acts perpetrated against Women which cause or could cause them physical, sexual, psychological, and economic harm, including the threat to take such acts; or to undertake the imposition of arbitrary restrictions on or deprivation of fundamental freedoms in private or public life in peace time and during situations of armed conflicts or of war;. k) Women means persons of female gender , including girls. Article 2. Elimination of Discrimination Against Women 1.

7 States Parties shall combat all forms of discrimination against Women through appropriate legislative, institutional and other measures. In this regard they shall: a) include in their national constitutions and other legislative instruments, if not already done, the principle of equality between Women and men and ensure its effective application;. b) enact and effectively implement appropriate legislative or regulatory measures, including those prohibiting and curbing all forms of discrimination particularly those 5. harmful practices which endanger the health and general well-being of Women ;. c) integrate a gender perspective in their policy decisions, legislation, development plans, programmes and activities and in all other spheres of life;. d) take corrective and positive action in those areas where discrimination against Women in law and in fact continues to exist;. e) support the local, national, regional and continental initiatives directed at eradicating all forms of discrimination against Women .

8 2. States Parties shall commit themselves to modify the social and cultural patterns of conduct of Women and men through public education, informatio n, education and communication strategies, with a view to achieving the elimination of harmful cultural and traditional practices and all other practices which are based on the idea of the inferiority or the superiority of either of the sexes, or on stereotyped roles for Women and men. Article 3. Right to Dignity 1. Every woman shall have the right to dignity inherent in a human being and to the recognition and protection of her human and legal Rights . 2. Every woman shall have the right to respect as a person and to the free development of her personality. 3. States Parties shall adopt and implement appropriate measures to prohibit any exploitation or degradation of Women . 4. States Parties shall adopt and implement appropriate measures to ensure the protection of every woman's right to respect for her 6. dignity and protection of Women from all forms of violence, particularly sexual and verbal violence.

9 Article 4. The Rights to Life, Integrity and Security of the Person 1. Every woman shall be entitled to respect for her life and the integrity and security of her person. All forms of exploitation, cruel, inhuman or degrading punishment and treatment shall be prohibited. 2. States Parties shall take appropriate and effective measures to: a) enact and enforce laws to prohibit all forms of violence against Women including unwanted or forced sex whether the violence takes place in private or public;. b) adopt such other legislative, administrative, social and economic measures as may be necessary to ensure the pre vention, punishment and eradication of all forms of violence against Women ;. c) identify the causes and consequences of violence against Women and take appropriate measures to prevent and eliminate such violence;. d) actively promote peace education through curricula and social communication in order to eradicate elements in traditional and cultural beliefs, practices and stereotypes which legitimise and exacerbate the persistence and tolerance of violence against Women .

10 E) punish the perpetrators of violence against Women and implement programmes for the rehabilitation of Women victims;. f) establish mechanisms and accessible services for effective information, rehabilitation and reparation for victims of violence against Women ;. 7. g) prevent and condemn tra fficking in Women , prosecute the perpetrators of such trafficking and protect those Women most at risk;. h) prohibit all medical or scientific experiments on Women without their informed consent;. i) provide adequate budgetary and other resources for the implementation and monitoring of actions aimed at preventing and eradicating violence against Women ;. j) ensure that, in those countries where the death penalty still exists, not to carry out death sentences on pregnant or nursing Women ;. k) ensure that Women and men enjoy equal Rights in terms of access to refugee status determination procedures and that Women refugees are accorded the full protection and benefits guaranteed under international refugee law, including their own identity and other documents. 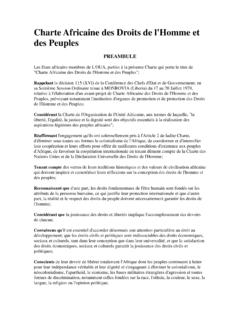 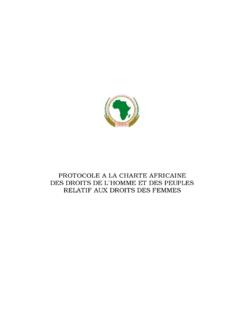 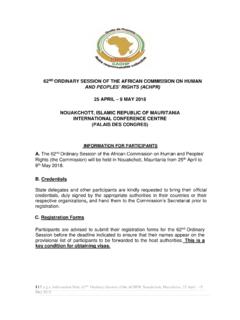 62ND ORDINARY SESSION OF THE AFRICAN …

2 | P a g e, Information Note, 62nd Ordinary Session of the ACHPR, Nouakchott, Mauritania, 25 April – 9 May 2018 D. Registration and identification badges On arrival at the Session venue, participants are advised to register and obtain identification badges in the reception lobby of the Conference Hall to be able to 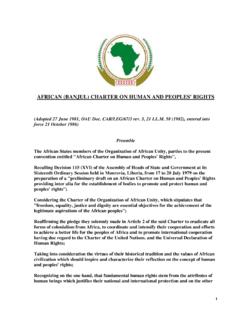 AFRICAN (BANJUL) CHARTER ON HUMAN AND …

2 hand that the reality and respect of peoples rights should necessarily guarantee human rights; Considering that the enjoyment of rights … 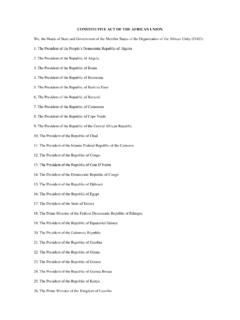 CONSTITUTIVE ACT OF THE AFRICAN UNION

CONSTITUTIVE ACT OF THE AFRICAN UNION We, the Heads of State and Government of the Member States of the Organization of the African Unity (OAU): 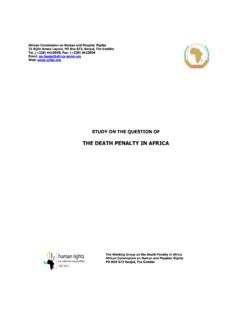 THE DEATH PENALTY IN AFRICA

STUDY ON THE QUESTION OF THE DEATH PENALTY IN AFRICA Submitted by the Working Group on the Death Penalty in Africa in accordance with Resolution ACHPR/Res.79 (XXXVIII) 05

8 (a) propaganda for war; (b) incitement of imminent violence; or (c) advocacy of hatred that is based on race, ethnicity, gender or religion, and that 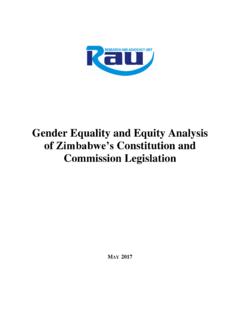 5 higher aspirations as a result. Girls and boys will have positive role models for their futures. Getting it right on women’s equality will help us