Sunday School Lesson Psalm 51. by Lorin L. Cranford All rights reserved . Confession A copy of this lesson is posted in Adobe pdf format at under Bible Studies in the Bible Study section A note about the blue, underlined material: These are hyperlinks that allow you to click them on and bring up the specified scripture passage automatically while working inside the pdf file connected to the internet. Just use your web browser's back arrow or the taskbar to return to the lesson material. **. Quick Links to the Study I. Context II. Message a. Historical a. Forgiveness & confession, vv. 1-7, 9. b. Literary b. Restoration & Promise, vv.

Page 2 of Psalm 51 Bible Study velopment that took place with each psalm. That analysis looks at two aspects. First is the development of the psalm from its original

1 Sunday School Lesson Psalm 51. by Lorin L. Cranford All rights reserved . Confession A copy of this lesson is posted in Adobe pdf format at under Bible Studies in the Bible Study section A note about the blue, underlined material: These are hyperlinks that allow you to click them on and bring up the specified scripture passage automatically while working inside the pdf file connected to the internet. Just use your web browser's back arrow or the taskbar to return to the lesson material. **. Quick Links to the Study I. Context II. Message a. Historical a. Forgiveness & confession, vv. 1-7, 9. b. Literary b. Restoration & Promise, vv.

2 8, 10-19. **. Confession of sins is challeng- ing for most Americans these days. Our culture can more easily say, I. goofed! Or, I made a boo-boo! . Deep, profound, despicable guilt is un-American in our thinking. But Psalm 51 challenges a culture and a people to probe way below the sur- face of human conduct and to take a serious look at the depraved human heart that lurks deep down inside every person. David speaks in the Psalm of problems far deeper than adultery and murder, as heinous as these actions are. He had come to recognize the source of these ac- tions came from something foul and detestable down inside himself. This, in spite of being the king of the nation, and being called a man after God's own heart.

3 Spiritual health is closely linked to coming to grips with exactly who we are before a holy and absolutely righteous God, who will determine our eternal destiny in final judgment. Consequently, the study of this Psalm is vital to our quest for a spiritually healthy life and to right standing before the Judge of this universe. I. Context Especially important is the background study on Psalm 51 done in an earlier study of this passage. Beyond that the background analysis found in the other studies in the psalms is important. Some new material will supplement that which has already been done. This Bible study draws upon the previous one, but will seek to underscore new perspectives drawn from the text.

4 Interpreting the psalms is always a multi-layered process as we seek to peal back the layers of de- Page 1 of Psalm 51 Bible Study velopment that took place with each Psalm . That analysis looks at two aspects. First is the development of the Psalm from its original composition to the finalized form that we now possess. This process sometimes spans sev- eral centuries in the Old Testament world, since the finalized form of the psalms took place dur- ing the exilic and post-exilic eras of the sixth century BCE. David lived approximately 1037. to 965 BCE, almost 500 years before the final composition of this Psalm . Thus emphasis focuses on the composi- tional starting point and on the liturgical use at the close of this developmental stage.

5 When possible, scholars seek to probe the period between these starting and stopping points of development. Second, the history of interpretation of the use of the Psalm plays an important role. That history has two distinct thrusts with subcategories contained in each. The Jewish history of usage and understanding centers on insights gleaned from the Dead Sea scrolls Qumran community, from the inter-testamental Jew- ish writings that either allude to the Psalm or quote it with interpretive perspective, from rabbinic Judaism preserved in the various traditions of the Talmud in the third to fifth Christian centuries. Then the history of Christian understanding of the Psalm stands as a significant source of insight.

6 This begins with possible use of the Psalm inside the New Testament, then moves to the perspectives of the Church Fathers in the second through eighth centuries. Once the Protestant Reformation takes place in the 1500s, interpretive streams often split apart widely between Roman Catholic and Protestant viewpoints. Sometimes intermingled with the various interpretive traditions is something more basic. Until the past couple hundred years with the discoveries coming out of biblical archaeology, the Hebrew text has often been very obscure in meaning. The Greek translation of the Hebrew text done in 175 BCE represents one inter-testamental Jewish stream of understanding of the text.

7 To be sure, that LXX translation / interpreta- tion of the Hebrew text played a profound influence on Jerome who produced the Latin Vulgate translation in the fifth century CE. Still today Bible translators are occasionally at a loss to make clear sense out of the ancient Hebrew text and thus turn to both the LXX and the Vulgate for help in producing an English translation of the text. All of this to say emphatically, interpreting a Psalm is serious, detailed work. And conclusions drawn about historical meaning, and contemporary application, must be made with due respect to the diversity of viewpoints that exists among careful students of the Bible.

8 A. Historical Then Nathan went to his house. The following verses External History. The superscription con- depict David passionately pleading with God to spare tained in the early texts of the Psalm is important to the life of this baby. When the baby died, David the historical issues (NLT): went into the house of the Lord and worshipped the For the choir director: A Psalm of David, regarding the Lord. Perhaps out of this time comes the origin of time Nathan the prophet came to him after David had this Psalm . Or, perhaps it reflects a latter reflective committed adultery with Bathsheba. understanding of David, as he looks back on this This would place the origin of this Psalm in the minis- experience.

9 Try of the prophet Nathan during David's reign. Very The editorial hand on the Psalm surfaces with possibly it was intended to be understood against allusions to the Temple of Solomon in vv. 18-19, the backdrop of David's acknowledgment of sin which now lay in ruins. This suggests the final shape found in 2 Sam. 12:13-14: 13 David said to Nathan, of the Psalm took place during the Babylonian exile I have sinned against the Lord. Nathan said to David, (586-539 BCE), some 400 plus years after David's Now the Lord has put away your sin; you shall not die. 14 Nevertheless, because by this deed you have utterly reign (1005-965 BCE).

10 The placing of this Psalm scorned the Lord, the child that is born to you shall die. 15 after Psalm 50 with its powerful emphasis on divine Page 2 of Psalm 51 Bible Study judgment of Israel was most likely intended to express a message urging national repen- tance in view of the po- tential of divine wrath over sinfulness. The history of the transmission of this Psalm from its origin to its final shape is im- possible to determine with certainty. The as- sumption would be that this Psalm surfaced prayer seeks a cleansing and purification from all during certain liturgies transgressions, iniquities, and sins (vv. 1-2, 9). It may in temple worship from have been composed for use by the congregation, Solomon's time until the destruction of Solomon's and individuals as part of it, in connection with the Day of Atonement (see Lev.) 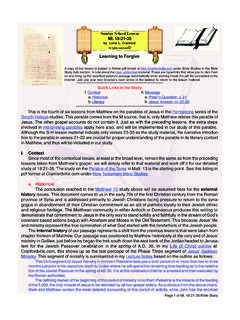 Page 3 of Mt. 18:21-35 Bible Study will face in Jerusalem and beyond. At another level, Jesus is instructing disciples of every age, future members of 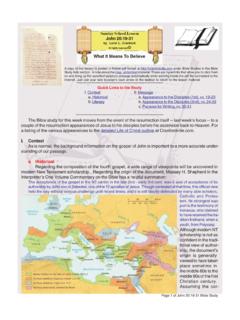 Page 1 of John 20:19-31 Bible Study Sunday School Lesson John 20:19-31 by Lorin L. Cranford All rights reserved © What It Means To Believe A copy of this lesson is posted in Adobe pdf format at http://cranfordville.com under Bible Studies in the Bible 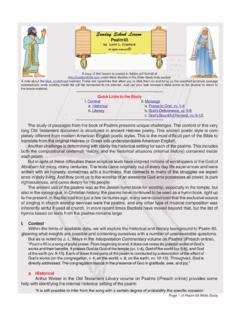 Page 2 of Psalm 65 Bible Study which gave rise to the composition of this hymn. A time of drought had filled the country with great concern for the growth of the …