2 But the fact remains that there is still great political debate over the entire public administration profession. Arguments will continue long after this paper has been researched, written, annotated and put on a shelf somewhere. MPA- . trained professionals who work for state, local or the federal government and MBA- . trained professionals engaged in the quasi- public sector will also continue to do their jobs no matter what lines are drawn, conclusions made or research papers presented. Does it really make any difference whether public administration and business administration are linked in any way?

3 According to some of the authors who've weighed in on the matter, as well as three professionals who currently work or who have worked in the public sectors, and curricular offerings in master's programs, it does matter. All management is not necessarily the same. The history of the debate is important and ongoing, as are the sorts of tasks expected on the job as well as preparation for those tasks and outcomes. Siamese Management Twins 3 Not surprisingly since most of the literature reflects research and writings by scholars, there is little mention of emotion or passion reflected in discussions of business administration tasks.

4 The vernacular is limited to terms like bottom line and return on investment rather than connection to mission or doing the right thing. These terms and tasks may lead one to assume that business professionals lack the heart attributed to those working in the public sector, especially in non- . profit organizations. An utterance by Wallace Sayre in the 1950s has led to a storm of discussions and writings revolving around the similarities and differences between managers working in the public sector and those engaged in the private sector. Sayre is quoted as having said, public and private management are fundamentally alike in all unimportant respects.

5 Another academic, Graham T. Allison, carried Sayre's statement one step further by declaring, public and private management are at least as different as they are similar, and that differences are more important than the similarities (1979, p. 87). Proponents of New public Management laud managerial practices from the private sector. Reformers have proclaimed, public managers should seek to emulate the supposedly successful techniques of their private sector counterparts ( management by objective, total quality management, devolved management, performance- related pay) (Boyne, 2002, p.)

6 97). Boyne went on to contradict Sayre, having said, The argument of this paper is that Sayre's assertion is not supported by the empirical evidence. Therefore, the injunction that public managers can learn useful lessons from private managers is worthy of serious, but cautious, consideration (p. 98). Explanations of the Siamese Management Twins 4 similarities and differences, as well as threads of the contentious issue unraveling since then, will be presented here. Additionally, three professionals working in Sioux Falls, South Dakota, offered their input. Jeffrey Traill, former city administrator and currently administrative officer for the Department of Homeland Security (part of the Transportation Safety administration ), Andy Wentzy, Director of the Sanford Initiatives, and Mark Meierhenry, former South Dakota Attorney General and now an attorney in private practice, were consulted about the practical linkages and differences they have experienced in their graduate courses in public administration , business administration and law as well as what they have seen on the job in the private and public sectors.

7 A brief inspection of public administration and business administration curricula will also lend some weight in the courses linking and separating the two professional degrees and how professionals are prepared to carry out their duties. Definitions A review of literature illustrates the difficulty of even drawing cogent definitions of public and private management or administration . There is much overlap, intermingling and blurring of enterprises, especially in firms working under governmental contracts. Some corporations wield so much power and influence on the public interest that it is no longer accurate to describe them as private.

8 For the purposes of this paper, public is defined as government and non- government organizations owned collectively by political communities dedicated to providing services to the public (including non- government organizations). Private, for the purposes of this paper, refers to businesses that are privately owned and operated Siamese Management Twins 5 and controlled by market forces. Management is defined by Webster as the organization and direction of resources to achieve a desired result. Historical and Theoretical Underpinnings Although historians say public administration has been practiced for centuries, most attention has focused on the late 19th Century forward.

10 Increased efficiencies would smooth procedures and offer answers to management that were concrete. Taylor's thoughts influenced accounting, education, consulting, library science, architecture, health, the military, public administration , industrial and organizational psychology and gender studies (Fry & Raadschelders, 2008, p. 750). Furthermore, Taylor held that his tenets were applicable to public administration specifically since he considered the average public employee did little more than one- third to one- half of a good day's work (Fry & Raadschelders, 2008, p. 56).

herbert a. simon and the concept of rationality ...

Revista de Economia Política 30 (3), 2010 455 herbert a. simon and the concept of rationality: Boundaries and procedures gustaVo Barros* This paper discusses Herbert A. Simon’s conception of rationality in two of its 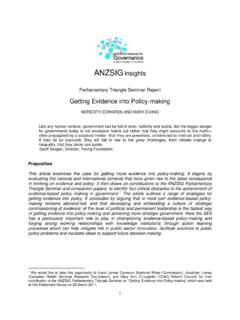 Getting Evidence into Policy-making

1 ANZSIG Insights Parliamentary Triangle Seminar Report Getting Evidence into Policy-making MEREDITH EDWARDS AND MARK EVANS Like any human venture, government can be full of error, fallibility and hubris. 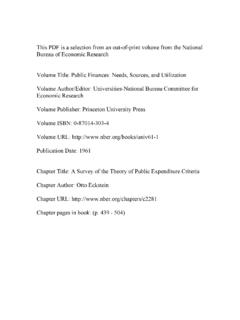 A Survey of the Theory of Public Expenditure Criteria