Published by Christ For The Nations All Rights Reserved Unless otherwise marked, all Scripture quotations are taken from the NKJV. Scripture quotations noted Amplified are from The Amplified Bible (AMP). The Amplified Bible, Old Testament copyright 1965, 1987 by the Zonder- van Corporation. The Amplified New Testament, copyright 1954, 1958, 1987 by The Lockman Foundation. Used by permission. CHAPTER 1. PRAYER THAT MOVES MOUNTAINS. Jesus, in Matthew 21:21-22, said, Assuredly, I say to you, if you have faith and do not doubt, you will not only do what was done to the fig tree, but also if you say to this mountain, Be removed and be cast into the sea,'. it will be done. And whatever things you ask in prayer, believing, you will receive.

1 Published by Christ For The Nations All Rights Reserved Unless otherwise marked, all Scripture quotations are taken from the NKJV. Scripture quotations noted Amplified are from The Amplified Bible (AMP). The Amplified Bible, Old Testament copyright 1965, 1987 by the Zonder- van Corporation. The Amplified New Testament, copyright 1954, 1958, 1987 by The Lockman Foundation. Used by permission. CHAPTER 1. PRAYER THAT MOVES MOUNTAINS. Jesus, in Matthew 21:21-22, said, Assuredly, I say to you, if you have faith and do not doubt, you will not only do what was done to the fig tree, but also if you say to this mountain, Be removed and be cast into the sea,'. it will be done. And whatever things you ask in prayer, believing, you will receive.

2 Power to move mountains! This is what Jesus said. His promise includes that and more. It includes all things. And whatever things you ask in prayer, believing, you will receive. It sounds too good to be true, but it is true. Perhaps friend, at this moment, you are weighted down with a heavy burden. It may be that a serious illness has come to you or a member of your family. Or, it may be that you are wrestling with embarrassing financial problems. Whatever your need might be, at your fingertips is the means by which you can solve every problem. You who are sick, in your very room there is a power waiting to be released that can set you free from every illness and disease! Power to move mountains!

3 Yes! But, you must learn the secret by which you may release this power. Just wishing for things to get better won't bring the result. You have probably found this out already; yet, the right kind of prayer, the kind Jesus spoke about when He said, If you ask anything in My name, I will do it, will bring the answer without fail (John 14:14). Perhaps one of the most common ways in which people weaken their faith is the assumption that many of their prayers are not answered because it is not the will of God to answer them. While it is true that people sometimes ask for things that are not His will to give, the fact remains that many things they ask for are in harmony with the revealed will of God.

5 Look at the mighty answers to prayer the men of the Bible experienced. When Abraham, at an advanced age, desired God to give him a child of his wife, Sarah, God miraculously strengthened Sarah's womb, so she could bear him a son. Jacob, the grandson of Abraham, once a common adventurer, but later 3. on became a Prince with God, wrestled with God in a night of prayer, even while his brother Esau rode toward him with an army seeking vengeance. He prevailed with God, and God prevailed with Esau (Genesis 32-33). Jerusalem was invaded by a superior force of Assyrians who had been invariably successful in all previous campaigns. The resources of Hezekiah were no match for their great army.

6 But Hezekiah prayed, and that night a plague of death struck the invading host. By morning 185,000 men lay dead (2 Kings 19:15-35). Shortly after this, Hezekiah was sick unto death. In the natural order of things there was no hope for his recovery, but Hezekiah turned his face to the wall, and pleaded with God. The result was fifteen more years were added to his life (2 Kings 20). Elijah prayed for the widow's son who had died. Never before had life returned to any person after death had come. There was no precedent for raising the dead in all of history. Yet, the prayer of Elijah reversed time and caused the dead boy to open his eyes and return to this world (1 Kings 17:20- 23).

7 Daniel, God's faithful prophet, prayed for the restoration of Jerusalem, which had been lying in ashes since the days of Nebuchadnezzar's invasion. He was still alive to see it because King Cyrus made the decree which permitted the Jews to return to their city to rebuild (Daniel 9). Peter was cast into prison, and orders had been given for his execution. The church prayed without ceasing for his release, and lo, an angel of the Lord visited the prison and led Peter to safety. We see, again and again, how God answered prayer for every conceivable need of His people and under every imaginable circumstance. Whether it was deliverance from sickness, a miracle supply, preservation from danger, Divine guidance, saving one from dying of thirst or the wisdom needed to rule a kingdom.

8 No matter what the need was God supplied it in answer to believing prayer. The law of receiving is positive and certain. Jesus said, Ask, and it will be given to you; seek, and you will find; knock, and it will be opened to you. For everyone who asks receives, and he who seeks finds, and to him who knocks it will be opened (Matthew 7:7). What does this mean? It means there is an Invisible Power about us who is able to work out every problem, and who will anticipate every need and supply whatever may be required. A. Power so great it can move the very mountains if need be. Does this sound too good to be true? As God is true, so the promise is true. Such answers to prayer can be yours, too, if you will take time to learn the secret.

9 4. CHAPTER 2. THE SECRET OF THE PRESENCE. OF GOD. In the first recorded sermon of Christ, He took occasion to lay down some of the great principles that governed the successful operation of prayer. Jesus was interested only in prayer that was successful, prayer that brought the answer, prayer that would, if need be, move the very mountains. It was always the habit of Jesus to strike right at the heart of the matter. He knew what was essential and what was not. He didn't tell men they ought to pray. That instinct was born in their hearts. The most ignorant heathen prayed. The prophets of Baal prayed. The hypocritical Pharisees prayed. What Jesus was interested in was showing men the right way to pray, so they could see miracles in answer to their prayers.

10 THE SECRET CLOSET. Jesus began at the beginning. He showed that true prayer was communion with the Supreme Being the Father God. Prayer was a solemn act, and it should be entered into the right way. He told men that before praying they were to seclude themselves where they would be free from interruption. Men could not successfully carry on human and Divine communion at the same time. Jesus bid them to go into their closet, close the door, and pray to their Heavenly Father Who sees what is done in secret.. To emphasize His point, He reminded them of the Pharisees who prayed on the street corners to be seen of men. He cautioned His disciples not to be like them: And when you pray, you shall not be like the hypocrites.

Comparison of CLEC-2 and GPVI signaling in …

COMPARISON OF CLEC-2 AND GPVI SIGNALLING IN PLATELETS: THE ROLE OF ADAPTOR PROTEINS . By . Craig E Hughes . A thesis submitted to … 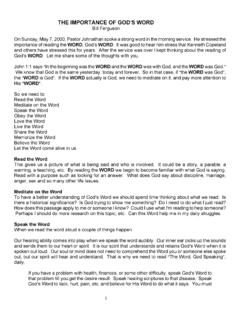 THE IMPORTANCE OF GOD=S WORD Bill Ferguson On Sunday, May 7, 2000, Pastor Johnat han spoke a strong word in the morning service. He stressed the importance of … 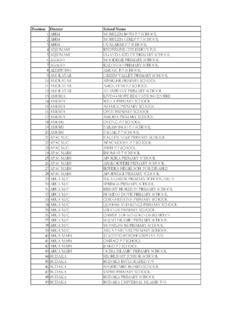 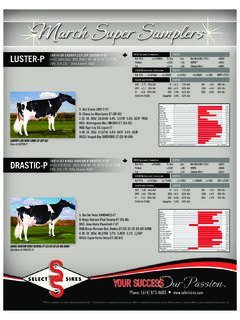 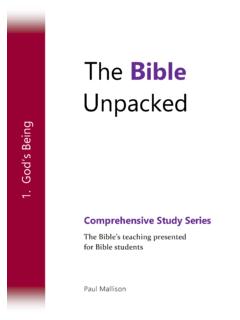 said, “For though you might have ten thousand instructors in Christ, yet you do not have many fathers” (1 Cor. 4:15 NKJV). I am beginning to understand that a man can give a word, but there is power to change 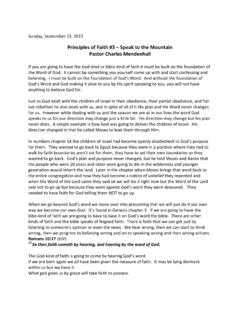 Principles of Faith #3 Speak to the Mountain Pastor ...

Sunday, September 23, 2012 Principles of Faith #3 – Speak to the Mountain Pastor Charles Mendenhall If you are going to have the God-kind or bible-kind of …