2 Hess' additional sublease space was due to the recently announced 300 job cuts across Houston , including in Downtown , to cut costs. However, sublease availability has been steadily declining and is at its lowest since the peak of the downturn in 2016 and we expect to see the continuing growth trend in leasing activity, albeit slower than in 2017. In the first quarter, oil prices rose to the highest level since 2015, nearing $70 in January. Houston continues to move towards full recovery with slow but steady job growth, and the Houston region is forecasted to gain 45,000 jobs in 2018 , primarily in non-energy sectors. There is cautious optimism in the Market 's road to recov- ery. The performance of the Downtown Market signals that the recession has bottomed out and that the worst of the energy downturn may be over, as the Market continues to show signs of improvement: free rent and other concession packages are gradually leveling out.

3 Oil prices comfortably remain in the $60 to $70 a barrel range; and leasing activity continues to be positive. While job growth in the energy sector is expected to remain flat in the short-term, Downtown also continues to show major signs of renewed Market confidence, as several Downtown firms announced staff, and potentially, footprint expansions in the first quarter. KPMG is hiring more employees and increasing its footprint by 11,916- SF in 811 Main, bringing its total footprint to 126,433-SF;. Mitsubishi Heavy Industries Ltd (LyondellBasell Tower, 1221 McKinney) plans to increase the number of employ- ees in its oil and gas division as it adds projects to its portfolio. Others include: Deloitte LLP; Accenture;. Hunton Andrews Kurth LLP (following its merger with Hunton & Williams LLP); Arundo Analytics, which is set to double its headcount; Downtown incubator, Station Houston ; and Alvarez & Marsal (after its recent acquisition of TRCG Advisers).

5 Just shy of a year of being completed, Market Square Tower reached 90. percent occupancy in December 2017 a milestone achieved three months short of the developer's pro- 1001 McKinney jected 15-month timeline, and amid Market conditions. activity particularly among law firms, which could poten- With over 8 months to completion, Marlowe condo tially bring in more employees into Downtown . Downtown building is already over 75 percent sold, further signaling continues to attract a growing number of co-working and increased demand for Downtown living. Downtown was collaborative spaces, and promote entrepreneurship and named the hottest rental submarket in Houston by the innovation. The recent opening of WeWork is expected to reputed , in its February 2018 Report . bring in an influx of entrepreneurs, new small businesses, Downtown 's high rank was due to the new property and satellite campuses of major firms. Facebook also deliveries (and their unique amenities), rental rate growth recently held a free Community Boost event in Downtown and absorption, and strong leasing activity.

6 Downtown at the Houston Public Library's Julia Ideson Building was attributed with a percent annualized growth at 550 McKinney St. Houston is the second city for the from November to January, about 5 percentage points Community Boost event to help improve digital skills crit- (60 percent) higher than the next highest submarket. ical to growing businesses. The Downtown hospitality Market also continues to Flight to quality continues to spur major capital invest- perform beyond expectations, as Downtown attracts a ments in renovations, repositioning older buildings growing number of business and tourism visitors. Houston to compete with trophy towers, and acting as a major saw million visitors in 2017, a 6 percent increase talent recruiting tool for their tenants. Significant reno- over 2016, breaking records for the third consecutive vations continue to deliver competitive space to existing year. Growth in international visitors was credited to and potential tenants.

7 Two major renovation plans total- major events like the 2017 Super Bowl LI and the World ing over $65 million were announced in the first quarter. Series championship. In addition, 429 future conventions Brookfield Properties recently announced details of its and meetings were booked in 2017, representing more $50+ million renovation plans for the recently acquired than 802,850 room nights, up about 5 percent from the Houston Center. Bank of America Tower will undergo a record 765,401 room nights booked in 2016. During the $15 million renovation starting in spring 2018 . Downtown first week in March, Downtown drew more than 4,300. continues to see an uptick in leasing activity, and a executives and top policy officials from over 70 countries diverse group of tenant entrants and expansions. Major for IHS Markit's CERAWeek, perhaps the most prominent leases recorded in the first quarter include the following: global energy conference, at the Hilton Americas Hotel Jackson & Walker renewed and expanded to 77,015-SF in Downtown .

8 Attendance was up about 20 percent from last year's 3,500+ attendees. Downtown Houston Market Report Q1 2018 2. Market Overview RESIDENTIAL. RESIDENTIAL 1711 Caroline, a 5-story, 220-unit mid-rise residential HIGHLIGHTS building by Leon Capital Group is now leasing, and had their first set of move-ins just after the end of the first 5,992. quarter. Offering a fusion of rugged charm and indul- gent modern luxury, the apartment building is offering 2 months free rent. The property received its Temporary residential units Certificate of Occupancy (TCO) in March, and is expected to be fully completed before the summer. (Website). 371. under construction Camden Property Trust received building permits total- ing more than $57 million in December for the first phase of Camden Downtown , a 21-story, 271 unit apartment tower and its parking garage, at 1515 Austin. The project, 1,408. which broke ground at the end of 2017, is expected to start leasing in the fourth quarter of 2019.

9 The Class A. tower will be built on part of a 3-acre site a block from Market Square Tower amenities proposed Toyota Center, with a 20,000-SF amenity deck. The east- west orientation of the Ziegler Cooper-designed tower will create a more energy-efficient exposure of the OFFICE. facades and maximize views to Downtown and the adja- cent Root Memorial Square Park. (HBJ, Chronicle, Bisnow) Skanska's 35-story, 775,000-SF Capitol Tower topped office out on April 4. Pre-certified LEED v4 Platinum, the high- highlights Less than a year after opening, Downtown 's tallest res- est level awarded by the Green Building Council, the idential high-rise, Market Square Tower, located at 777 Gensler-designed tower is on track for completion in the 775,000 sf under construction Preston, reached 90 percent occupancy in December 2017, much faster than anticipated. Despite the Market conditions, the leasing milestone was achieved three months short of Woodbranch Investments Corp.

10 's pro- second quarter of 2019. Among the building's tenant amenities are a 7,000-SF fitness center, a two-level 40-foot ceiling atrium with 26,000-SF of retail, restau- rant and dining options, a 24,000-SF SkyPark, and The jected 15-month timeline and signals robust interest in Assembly, a 10,000-SF private event and meeting space living Downtown . (Bisnow, Chronicle, RNR) on the 12th floor, with three meeting venues that can each host 140 people, and can extend out to the SkyPark. (Bisnow, HBJ, Chronicle, HBJ, PDRCorp). Brookfield Properties recently announced initial details of its $50+ million renovation plans for Houston Center, the million-SF office and retail complex it recently acquired. Plans include a revitalized mixed-use develop- ment with street-level retail, outdoor event spaces and white tablecloth restaurants. Detailed renovation plans should be complete within a year. (HBJ). Companies along America's most expensive streets have high price tags for their offices.

2 AN ONTON 3 DOWNTOWN IS HOUSTON’S GREATEST PLACE TO BE 1: Enhance and expand Downtown’s activities and attractions. 2: Create Downtown’s Green Loop.

Cargo Chartbook – Q1 2018 3 Market drivers 7. Global business confidence has continued to trend upwards in recent months, and is currently at its highest level 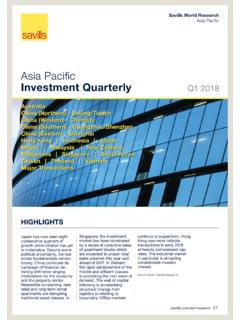