2 The Bureau of Justice Assistance is a com ponent of the Office of Justice Program s, whic h also include s the Bureau of Justice Statis tics, th e National institute of Justice, the Office of Juvenile Justice and Delinquency Prevention, and the Office for Victims of Crim e. Poi nts of view or opinions in this docum ent are those of the authors and do not represent the official position or policies of the Departm ent of Justice or the Executive Office of the President. All rights reserved. No part of this publication may be reproduced, stored in a retrieval system , or transmitted, in any form or by any m eans, electronic, mechanical, photocopying, recording or otherwise, without the prior written permission of the National drug court institute . Printed in the United States of America. drug Courts perform their duties without manifestation, by word or conduct, of bias or prejudice, including, but not limited to, bias or prejudice based upon race, gender, National origin, disability, age, sexual orientation, language, or socioeconomic status.

3 Ii Quality Improvement for drug Courts : Monograph Series 9. National drug court institute ACKNOWLEDGEMENTS. The National drug court institute (NDCI) is grat eful to the Office of National drug Control Policy of the Exec utive Office of the President and th e Office of Justice Program s, Bureau of Justice Assistance at the Department of Justice for the support that made this publication possible. NDCI owes its sincere gratitude to the researchers who agre ed to develo p the individ ual chapters knowing full well that there would be no financial remuneration for them. It took no c onvincing on our part for them to agree to work wit h us on the d ocument. Without question they are all proud of the research they are doi ng and eager to share it f or the benefit of drug Courts and our p articipants. The researchers involved were dedicated to the project and earnestly wanted a product that they could be proud of that would be useable by drug Courts across the country.

7 Quality Improvement for drug Courts : Monograph Series 9 v National drug court institute vi Quality Improvement for drug Courts : Monograph Series 9. National drug court institute INTRODUCTION. Currently 22. 6 m illion Americans abuse or are de pendent on a lcohol and/ or illicit drugs (SAMHSA, 2007). In 2 005, more than 20,0 00 clean, sober, and law-abiding participants graduated from drug Courts across the country (Huddleston, Marlowe, & Casebolt, 2008). In the grand scheme of things, and given the total num ber of people in the cri minal justice system with a drug abuse problem , the ne ed to bring drug Courts to scale is of gr eat importance. The research is clear that drug court graduates r eoffend considerably less than others in and out of the cri minal justice system who have drug problems (Belenko, 2001; Government Accountability Office, 2005).

8 Given all the research and the associated literature reviews on drug Courts , there can be little doubt that drug Courts are eff ective, but can they be more ef fective? The answ er wil l alway s be yes, as w e continue to innovate and learn more about what work s and what does not. As we bring drug Courts to scale in ter ms of capa city and geography, are w e also bringing drug Courts to scale in t erms of Quality ? Are we usin g all the research that is c urrently available to keep people in the drug court process and improve our graduation rates? Probably not. That is why the National drug court institute and a cadre of th e world's best researchers developed Quality Improvement for drug Courts : Evidence-Based Practices. We are now approaching 3,000 drug Courts and other problem-solving Courts in the United States.

9 So me state Supreme Courts or Adm inistrative Offices of th e Courts have gone to thei r legislatures with budget recommendations that provide for a drug court in every judicial district in the states. The literature supports this level of effort. The Ten Key Components are the guidelines for the drug court movement. The drug court community is indebted to the group that developed that document for the direction and standard it set for u s. However, for many drug Courts in the countr y, it i s time to ensure fidelity to the m odel by ensuring that evidence- based practices are i mplemented. This monograph will serve as the cataly st for team s to insist upon a higher standa rd of dr ug c ourt operations. Each ch apter of this monograph provides research that can guide drug Courts in their e fforts to increase retention and graduation rates of participants that agree to go through the drug court process.

10 Ou r hope is that a drug court that implem ents evidence-based practices like those reco mmended in this monograph could increase it s graduation rate by as much as 10%. This is an i mportant work not only for treat ment workers, but for judges, prosecutors, defense attorney s, probation off icers, drug court adm inistrators, and ot her drug court team members. We hope that this monograph will be a cornerstone document in the drug court movement. HOW TO USE THIS DOCUMENT. The National drug court institute is committed to improving drug court operations by equipping the field with best practices that ar e eviden ce-based. The present document is in tended to be used by the drug court team to help i mprove treatment practices. The document aims to provide a what wo rks approach based upon t he science with recommenda tions t o a ssist Courts in im plementation of best practices to improve overall program operations. 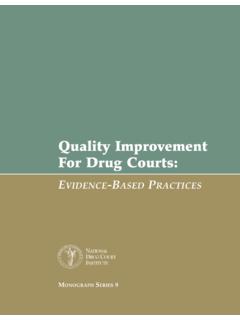 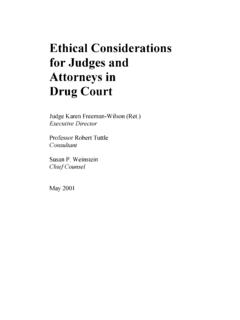 Ethical Considerations for Judges and Attorneys in … 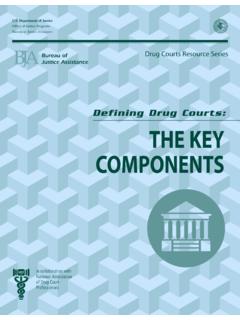 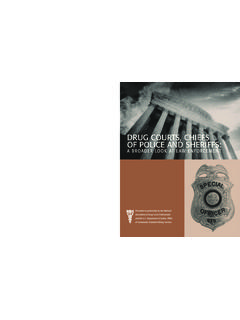 DRUG COURTS, CHIEFS OF POLICE AND SHERIFFS: A BROADER LOOK AT LAW ENFORCEMENT Presented in partnership by the National …

The Center for Substance Abuse Treatment has found, as of October, 2001, that more than 205,000 individuals are being treated in methadone treatment programs. 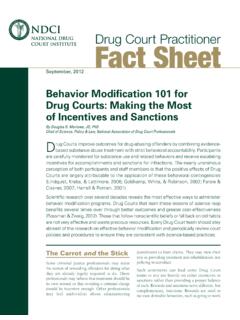 Drug Court Practitioner Fact Sheet 3 BEHAVIOR MODIFICATION 101 FOR DRUG COURTS: MAKING THE MOST OF INCENTIVES AND SANCTIONS Timing is Everything 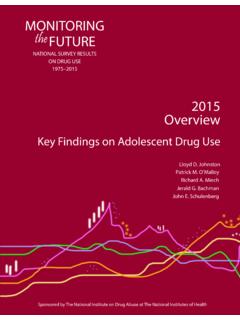 FROM SCHOLASTIC AND THE SCIENTISTS OF THE … 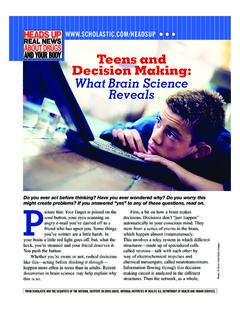 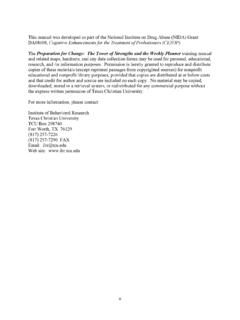 This manual was developed as part of the National ...

ii This manual was developed as part of the National Institute on Drug Abuse (NIDA) Grant DA08608, Cognitive Enhancements for the Treatment of Probationers (CETOP). The Preparation for Change: The Tower of … 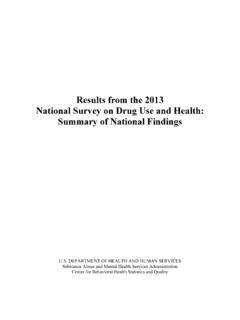 Results from the 2013 National Survey on Drug Use …

Results from the 2013 National Survey on Drug Use and Health: Summary of National Findings U.S. DEPARTMENT OF HEALTH AND HUMAN SERVICES Substance Abuse and Mental Health Services Administration Parental Substance Use and the Child Welfare System 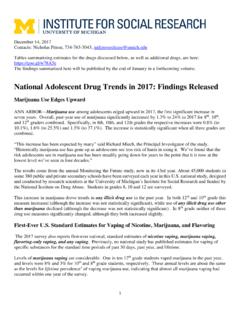 1 . December 14, 2017 . Contacts: Nicholas Prieur, 734-763-5043, mtfpressrelease@umich.edu . Tables summarizing estimates for the drugs discussed below, as well as additional drugs, are here: