Vedas are believed to be birthless and the term originates from the word "vid" meaning knowledge. Initially, the Vedas were not written down and the composers simply taught them to

3 The word Hindu is the modern term coined by those from foreign land, to denote the followers of vedas , who preferred to term themselves as those following Sanathana Dharma [literally the birth-less and death-less perennial dharmic (just) thought process]. vedas are believed to be birthless and the term originates from the word "vid" meaning knowledge. Initially, the vedas were not written down and the composers simply taught them to their disciples along with pronunciation. This was necessary because the language in which it was composed relied upon compound words, which, if pronounced or split differently gave rise to different meanings. The great Sage Veda Vyasa is supposed to have edited this storehouse of inherited knowledge, which was composed by many rishis in various poetic styles and in prose.

4 He divided it in to four books viz., Rig Veda, Yajur Veda, Sama Veda and Atharva Veda. Each Veda is further sub divided in to Samhithas and Brahmanas. The appendices to Brahmanas are Aranyakas and the appendices to Aranyakas are Upanishads. Each of these has several sookthas (loosely translated verses but many of them were written in prose). The Yajur Veda was rewritten once more and there are two Yajur vedas : Krishna Yajur Veda and Shukla Yajur Veda. Samhitaas are mainly poems written about various Gods. Brahmanas are mainly information about fire sacrifices with stories interspersed. There are about one hundred thousand verses in the four vedas . Though most of the Vedic Gods can be identified with Gods mentioned in the Puranas, the importance ascribed to them differed very much in vedas and Puranas.

5 For example, the first Veda viz. Rig Veda mentions Vishnu in five places and Rudra just in one place. The gods whom Veda considered as very important are Indra, Varuna, Agni, Mithra and Maruth who became minor gods later in the Puranas. Sri rudram occurs in Krishna Yajur Veda in the Samhitha of Taithireeya in the fourth and seventh chapters. This mellifluous prayer to Rudra has two parts - the Namakam (verses ending with Nama) and the Chamakam (verses ending with Cha May). There are several meanings to the word Rudra: Ritam (dam) Samsaara dukham draava yat iti Rudrah. He destroys the sorrows of the world (Rudra). Rodati Sarvamantakala The one who makes one to suffer. Ritou Naadaante dravati - draavayateeti Rudrah.

7 For personal (spiritual) use only. Commercial use is strictly prohibited. Source: Ritam Sabdam Vedaatmaanam Brahmane dadati Kalpaadaaviti Rudrah. Rudra presented vedas to Brahma at the Commencement of Kalpa. Rudras also means the persons created by Rudra as Sadrusha. Ritim Raati is responsible for the sound. He is praana Svarupa. Granter of praana (life). rudram is Teja [light] and Ruth who binds and attracts. Taam bhakte draavayati. He is even capable of driving away that Shakti (energy)." [Source: ] There are also several stories about the birth of Rudra. Some of them are given below: 1. Brahma created first four rishis called Sanandha, Sanaka, Sanathana and Sanat Kumara with a view to initiate the activities of creation.

8 But all the four preferred to be ascetics and never bothered to reproduce. Then Brahma got so angry that the anger was sufficient to burn all the three worlds. This anger escaped from his eyebrows and took the form of Rudra. Rudra's form was half woman and half man. Brahma commanded him to divide and disappear. Rudra divided himself into Rudra the male part as well as Rudrani the female part. This male part further got divided in to eleven parts. They were Ajan, Ekaath, Ahirbudhyan, Twashta, Rudra, Hara, Sambhu, Tryambaka, Aparajitha, Easana and Tribhuvana. (Another source mentions them as Manyu, Manu, Mahinasa, Mahaan, Shiva, Ruthudwaja, Bhava, Kaama, Vaamadeva, and Drutha Vrutha and yet another source mentions them as Mrigavyadga, Sarpa, Nirvrithi, Ajaikapada, Ahirbudhya, Pinakin, Dahana, Kapalin, Sthanu, Bhaga and Tryambaka.)

9 The female aspect was called Rudrani and she also divided herself into eleven parts and became consort to the eleven Rudras. 2. From Brahma's anger was born the Rudra, from his lap Narada, from his right Thumb Daksha, from his mind the Sanaka and from his left thumb one daughter called Veeraani. 3. When Brahma was deep in prayer requesting for a son similar to him, a baby deep blue in colour came on to his lap. That son started crying and Brahma told him not to cry - "Maa Ruda." The child wanted a name. Since he was crying (rudha), he was called Rudra. The child cried another seven times asking for names and another seven Rudras were formed. The first prayer in the vedas addressed to Rudra occurs in the Rig Veda and it is composed by sage Kanva and reads as follows: Kadrudraaya prachetasey meelhustamaaya tavyasey.

10 Vocheyma shantam Hridey. We sing this praise from our hearts of the great Rudra - who is a pourer for the sake of peace. [Please note that Ru means sound or to vibrate, Ruda is to pour or to cry and Rudra is to shed, to flow, to inflict.] Sri rudram called also as Satha Rudreeyam or Rudra Prasnam occurs in Krishna Yajur Veda in the Taithireeya Samhitha. It has two parts as mentioned before viz., Namakam and Chamakam each with eleven sections. While Namakam is a prayer to Rudra to forget about his avenging fierce, fearful and horrendous form and turn himself into a peaceful form and do good to us. Chamakam on the other hand lists out the blessings to be got from a prayer to Rudra and prays Him to regulate and bless our life for a moment forgetting his anger. 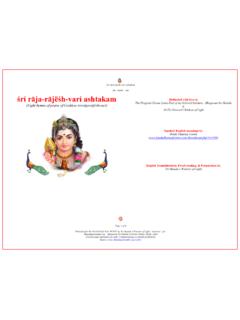 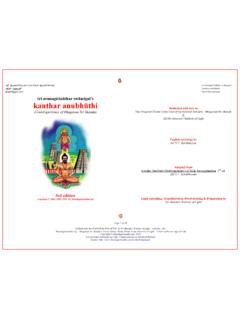 It is rightly believed that the work Kanthar Anubhuthi contains itself, explicitly and implicitly, many Mantras. The Names of the Lord, such as Murugan, Kanda, 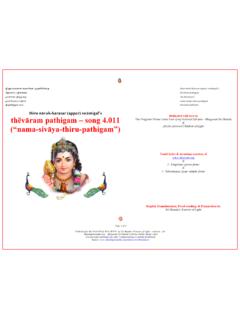 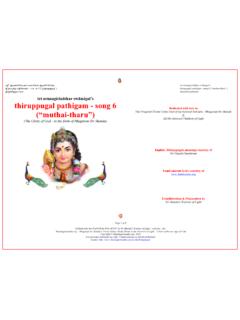 As Arunagirinathar was ordained by Lord Murugan to sing His glories, the Saint's main work is the Thiruppugal songs. Thiru is "God" or "Divine" and Pugal is "glory."

In religion, there are three parts viz philosophy, mythology, and ritual. Philosophy is the essence of religion. It sets forth its basic principles or fundamental doctrines or … 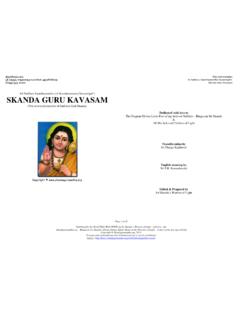 Like Kanthar Sashti Kavasam, Sri Saanthaanantha Swaamigal’s “Skanda Guru Kavasam,” is another famous Tamil hymn in praise of Lord Murugan – in the form 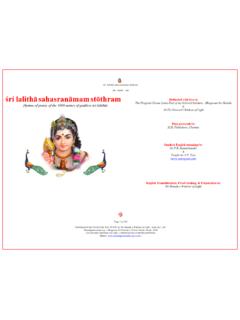 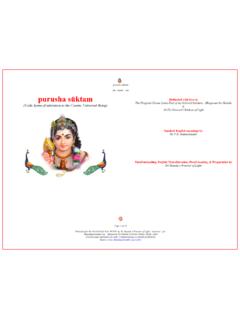 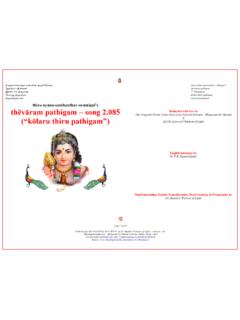 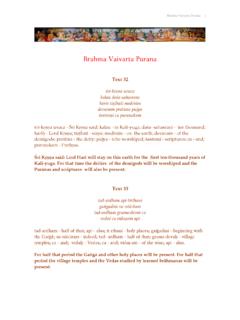 Brahma Vaivarta Purana 3 Brähmaëas will not wear tilaka or sacred thread, nor will they chant Gäyatri or study the Vedas and other scriptures. 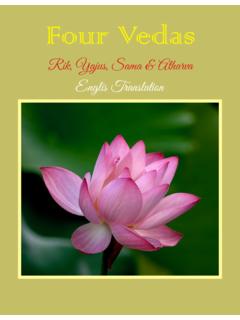 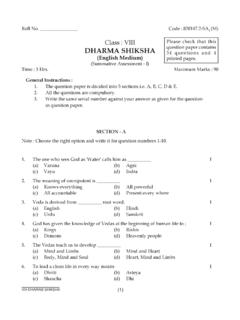 VIII-dharam shIksha (2) 7. Performing the 'Sandhya' every morning and evening and study the Vedic scriptures is _____ (a) Atithi Yajna (b) Brahma Yajna 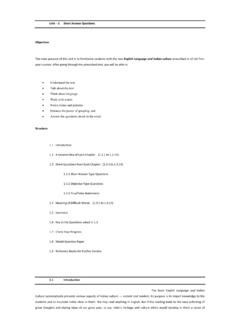 Unit – 1 Short Answer Questions Objectives The main purpose of this unit is to familiarize students with the text English Language and Indian culture prescribed in all UG first- year courses. After going through the prescribed text, you will be able to 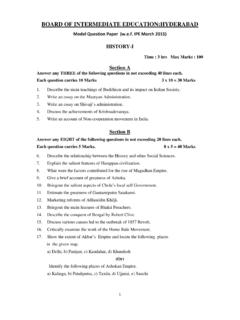 1 BOARD OF INTERMEDIATE EDUCATION:HYDERABAD Model Question Paper (w.e.f. IPE March 2015) HISTORY-I Time : 3 hrs Max Marks : 100 Section A Answer any THREE of the following questions in not exceeding 40 lines each.

Education, Board, Intermediate, Hyderabad, Board of intermediate education 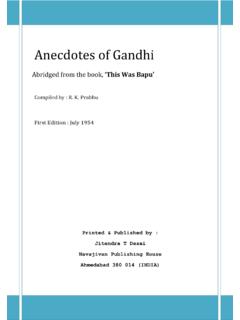 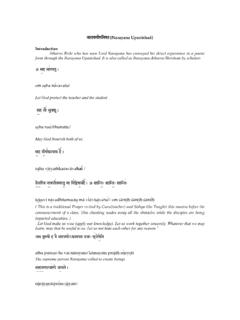