2 New York is a registered trademark of Oxford University PressAll rights reserved. No part of this publication may be reproduced,stored in a retrieval system, or transmitted, in any form or by any means,electronic, mechanical, photocopying, recording, or otherwise,without the prior permission of Oxford University of Congress Cataloging-in-Publication DataRational and Irrational Beliefs : research, theory, and clinical practice / edited by Daniel David,Steven Jay Lynn, & Albert 978-0-19-518223-11. Delusions. 2. Irrationalism (Philosophy) 3. Rationalism. 4. Health David, Daniel, Dr. II. Lynn, Steven J. III. Ellis, Albert, 1913 dc222009003476987654321 Printed in the United States of Americaon acid-free paperPrefaceIn the 1950s, influential researchers and theoreticians ( , Noam Chomsky,George Miller, Alan Newell, Herbert Simon) departed from the behavioristtradition and broke the intellectual ground for the nascent field that UlrichNeisser (1967) termed cognitive psychology in his book by the same this fertile period, Albert Ellis parted ways with both psychodynamicand behavioral psychotherapists to delineate a cognitive approach to concep-tualizing and treating psychological conditions.

3 As early as 1955, Ellis appliedthe verbcatastrophize(and laterawfulize) to the way people think when they areanxious. After the publication of the article Rational Psychotherapy (Ellis,1958) and the seminal bookReason and Emotion in Psychotherapy(Ellis, 1962,1994), Ellis became a tireless advocate of a cognitive approach to psy-chotherapy. Although other professionals ( , Adler, Horney, Kelly) beforehim had stressed the importance of cognitions in the clinical field, they did notpromote the cognitive paradigm as an entity in and of itself. It is fair to assertthat Ellis s Rational -emotive behavior therapy (REBT), which highlights theintegral role of cognition in adaptive and maladaptive functioning, is theoldest form of cognitive-behavior therapy (CBT)

4 And represents the prototypeof contemporary cognitive-behavior identifying the manifold ways in which individuals react to similarsituations, and by exploring how their attitudes, Beliefs , and expectanciesshape their reality and behavior, Ellis played a pivotal role in instigating the cognitive revolution in psychotherapy and psychology more , it is not surprising that concepts derived from REBT have pene-trated and/or been assimilated by cognitive psychology, psychotherapy, andmany domains of mainstream psychology, including the psychology of stress,coping, and resilience. Indeed, contemporary cognitive-behavioral therapies,regardless of their stripe, share the following propositions, derived fromor related to Ellis s REBT:(1)cognitions can be identified and measured,(2)cognitions play a central role in human psychological functioning anddisturbance, and(3) Irrational cognitions can be replaced with Rational cogni-tions and thereby abet functional emotional, cognitive, and behavioralresponses in keeping with personal goals and s ABC(DE) model is the cornerstone of REBT and cognitive-beha-vioral therapies.

5 In a nutshell, Ellis argued that individuals respond to anundesirable or unpleasant activating (internal or external) event (A) with agamut of emotional, behavioral, and cognitive consequences (C). The diverseways in which people respond to the same or similar events is largely the resultof differences in their cognitions or belief systems (B). Rational Beliefs can becharacterized as efficient, flexible, and/or logical. Rational Beliefs promote self-acceptance and adaptive coping with stressful events, reduce vulnerability topsychological distress, and play an instrumental role in achieving valued to REBT, Beliefs are infused withemotion. In fact, Ellis has arguedthat thoughts, feelings, and behaviorsare intimately interconnected.

6 Irrationalbeliefs (IBs) are related to unrealistic demands about the self ( , I must becompetent, adequate, and achieving in all respects to be worthwhile. ), others( I must become worried about other people s problems. ), and the world or lifeconditions ( I must be worried about things I cannot control. ) and are associatedwith a variety of dysfunctional feelings and behaviors. According to Ellis, vulner-ability to psychological disturbance is a product of the frequency and strength ofirrational Beliefs , as compared to rationalbeliefs. Clients who engage in REBT areencouraged to actively dispute/restructure(D) their IBs and to assimilate moreefficient (E) and Rational Beliefs in order to increase adaptive emotional, cognitive,and behavioral responses.

7 It is notable that this general framework (at least the A-B-Cpart of Ellis s scheme) is at the heart of most, if not all, cognitive-behavior therapies are the most popular contemporarytherapeutic approaches (Garske & Anderson, 2004), and have steadilyincreased in acceptance and influence. Not surprisingly, thousands of booksand scholarly publications have been devoted to cognitive psychology andCBT. Since its introduction to the psychological community, hundreds ofpapers have been published on the theory and practice of REBT. Some studies( , Dryden, Ferguson, & Clark, 1989; McDermut, Haaga, & Bilek, 1997) haveconfirmed the main aspects of Ellis s original REBT theory (Ellis, 1962),whereas other studies ( , Bond & Dryden, 2000; Solomon, Haaga, Brody,& Friedman, 1998) have made critical contributions to the evolution of REBTviPREFACE theory and practice (for details, see Ellis, 1994; Solomon & Haaga, 1995).

8 Furthermore, meta-analytic studies have supported the contention that REBTis an empirically supported form of CBT ( , Engels, Garnefski, & Diekstra,1993).Despite the centrality of Rational and Irrational Beliefs to CBT and REBT, itis also legitimate to say that no available book, monograph, or resource providesa truly accessible, state of the science summary of research and clinical applica-tions pertinent to Rational and Irrational Beliefs . Our concern about this gap inthe extant literature provided the impetus for this book is designed to provide a forum for leading scholars, researchers, andpractitioners to share their perspectives and empirical findings on the nature ofirrational and Rational Beliefs , the role of Beliefs as mediators of functional anddysfunctional emotions and behaviors, and clinical approaches to modifying irra-tional Beliefs and enhancing adaptive coping in the face of stressful life events.

9 Manyof the chapters in this volume represent international collaborations, and bringtogether and integrate disparate findings, to offer a comprehensive and cohesiveapproach to understanding CBT/REBT and its central constructs of Rational andirrational Beliefs . The authors review a steadily accumulating empirical literatureindicating that Irrational Beliefs are associated with a wide range of problems inliving ( , drinking behaviors, suicidal contemplation, life hassles ), and thatexposure to Rational self-statements can decrease anxiety and physiological arousalover time and can be a major tool in health promotion. The contributors identifyareas that have been underresearched, including the link between Irrational beliefsand memory, emotions, behaviors, and psychophysiological major focus of our book is on Rational and Irrational Beliefs as con-ceptualized by proponents of REBT.

10 However, the contents encompass othercognitive constructs that play an influential role in cognitive-behavior therapiesincluding schemas, response expectancies, intermediate assumptions, auto-matic thoughts, and appraisal and coping. While important in their own right,these concepts are discussed in terms of their relation to Rational and irrationalbeliefs and their role in cognitive-behavioral therapies and psychotherapy moregenerally. In addition to focusing on the ways Irrational Beliefs hamper ade-quate functioning, we highlight how Rational Beliefs contribute to positivecoping and engender resilience in the face of stressful life bears emphasizing that our book is not be an advocacy piece, slantedtoward positive findings regarding REBT. 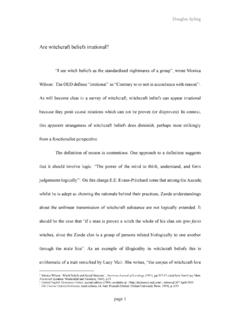 Douglas Ayling page 1 Are witchcraft beliefs irrational? “I see witch beliefs as the standardised nightmares of a group”, wrote Monica Wilson1.The OED defines “irrational” as “Contrary to or not in accordance with reason” 2. As will become clear in a survey of witchcraft, witchcraft beliefs can appear irrational