RED Scarf girl A MEMOIR OF THECULTURAL REVOLUTIONJILI JIANGFOREWORD BYDEVID HENRY HWANGTo my dearest Grandma,who would be so happy if shecould see this book Now, you have to choose between tworoads. The man from the RevolutionaryCommittee looked straight into my eyes. Youcan break with your family and followChairman Mao, or you can follow your fatherand become an enemy of the people. Hisvoice grew more severe. In that case wewould have many more study sessions, withyour brother and sister too, and the Red GuardCommittee and the school leaders. Thinkabout it. We will come back to talk to youagain. He and the woman left, saying they wouldbe back to get my statement. Without knowinghow I got there, I found myself in a narrowpassageway between the school building andthe school-yard wall. The gray concrete wallsclosed around me, and a slow drizzledampened my cheeks.

The Liberation Army Dancer Destroy the Four Olds! Writing Da-zi-bao The Red Successors Graduation ... “Heaven and earth are great, but greater still is the kindness of the Communist Party; father ... over my head in front of me. “Very good! Now I’ll support you. Lean over backward as far as you can.” That was easy.

1 RED Scarf girl A MEMOIR OF THECULTURAL REVOLUTIONJILI JIANGFOREWORD BYDEVID HENRY HWANGTo my dearest Grandma,who would be so happy if shecould see this book Now, you have to choose between tworoads. The man from the RevolutionaryCommittee looked straight into my eyes. Youcan break with your family and followChairman Mao, or you can follow your fatherand become an enemy of the people. Hisvoice grew more severe. In that case wewould have many more study sessions, withyour brother and sister too, and the Red GuardCommittee and the school leaders. Thinkabout it. We will come back to talk to youagain. He and the woman left, saying they wouldbe back to get my statement. Without knowinghow I got there, I found myself in a narrowpassageway between the school building andthe school-yard wall. The gray concrete wallsclosed around me, and a slow drizzledampened my cheeks.

2 I could not go back tothe classroom, and I could not go home. I feltlike a small animal that had fallen into a trap,alone and helpless, and sure that the hunterwas to the ReaderNote on PronunciationForewordPrologueThe liberation Army DancerDestroy the Four Olds!Writing Da-zi-baoThe Red SuccessorsGraduationThe Sound of Drums And GongsThe Propaganda WallA Search in PassingFateJunior High School at LastLocked U pAn Educable ChildHalf-City JiangsThe Class Education ExhibitionThe Rice HarvestThe Incriminating LetterSweepingEpilogueGlossaryAcknowledg mentsAbout the AuthorCopyrightAbout the PublisherNOTE TO THE READERIn China people are usually called by theirsurnames rst. Thus, in this book you will seeJi-li Jiang called Jiang Ji-li by her teachersand friends. Usage of the rst name is reservedfor close friends and are only one hundred surnames inChinese, so it is not unusual for people whoare not related to have the same women do not change their surnameswhen they marry, although they maysometimes be addressed by a married name asa sign of more detailed explanation of some of thewords, ideas, and people in this book may befound in the glossary at the ON PRONUNCIATIONMost Chinese words written in English arepronounced as they are written, with someexceptions:The letter c whenfollowed by a vowel ispronounced ts.

3 The letter q is pronounced ch. The letter x is pronounced sh. The letter z is pronounced dz. The letter combination zh is pronounced j. FOREWORDWhen I was a small boy, my grandmother toldme about a distant uncle who was living inChina during the Cultural Revolution. Hepromised to send a picture of himself to hisrelatives in America. If conditions were good,he said, he would be standing. If they werebad, he would be sitting. In the photo he sentus, my grandmother whispered, he was lyingdown!As a Chinese American born in SouthernCalifornia, my perception of China s CulturalRevolution was limited to stories that &lteredout from the few relatives who had stayedbehind. As I grew older and China opened upto the West, I learned more. A friend whowent to China to teach English returned with araft of tales from survivors, each more horriblethan the seeds of the Great Proletarian CulturalRevolution had been planted many yearsbefore it burst forth in 1966.

4 Seventeen yearsearlier, in 1949, the charismatic revolutionaryMao Ze-dong led the Communist Party topower as the new leaders of China. Some,including my own grandparents with theirchildren, feared the Communists and 1ed tothe small o2shore island of Taiwan. Manyprivileged Chinese chose to stay, however,motivated by a sincere belief that Mao Ze-dongwould bring great changes to a nationweakened by centuries of corrupt governmentand foreign the Communists did alter China inmany positive ways. Before Mao s liberation ,my father remembers as a boy in the city ofShanghai seeing corpses of beggars lying in thestreets while the wealthy drove by inchau2eured limousines. The Communistsworked for the bene&t of the poor, and uniteda nation shattered for decades into warringfactions.

5 Increasingly, however, it became clearthat Mao Ze-dong, though an inspiring leaderand brilliant revolutionary, was less skilled inthe practical a2airs of managing a deciding that sparrows were harmful tothe rice crop, for instance, Mao ordered theChinese to hunt and kill them. While hisdirective did succeed in reducing the sparrowpopulation, he had neglected to consider thatbirds also eat bugs; suddenly, the nation wasbesieged by a plague of 1966 rivals such as President Liu Shao-qiwere gaining power and in1uence within theCommunist Party. At the same time, Maohimself had become disillusioned with some ofthe revolution s failures in transforming thenation. So the Cultural Revolution was bornout of both Mao s genuine frustration and hisdesire to regain the upper hand in a powerstruggle that threatened his position.

6 His callfor perpetual revolution mobilized youngpeople into Red Guards who would wage classwar against remnants of traditional society,both native and foreign. Mao s strategy,however, ended up bringing untold su2eringto those very masses in whose name the battlewas waged, as well as disabling an entiregroup of young people who are now known asthe lost generation. Ironically, had Mao diedbefore launching the Cultural Revolution, hewould surely be remembered today as a muchmore positive historical s story made me experience the CulturalRevolution on a gut level. Had I been born inChina, I would have been nine years old in1966, just a year younger than Ji-li s sister, Ji-yun. I too would have faced many of the sameimpossible choices: to slander a good teacher,or be labeled an enemy of the people?

7 Toreveal the location of a forbidden document,or risk its being discovered by the Red Guards?To betray my parents with lies, or ruin myown future?Reading Ji-li s book, I believe I understandmore deeply now what my distant uncle musthave felt the day he lay down, thinking of hisrelatives in America, and snapped that photo. Ican only hope I would have shown the samedecency and courage exhibited by Ji-li actions remind me that, even underunbearable circumstances, one can still believein justice. And above all, love. David Henry HwangPROLOGUEI was born on Chinese New , my parents chose my name: Ji-li,meaning lucky and beautiful. They hoped thatI would be the happiest girl in the I was happy because I was always loved andrespected. I was proud because I was able toexcel and always expected to succeed.

8 I wastrusting, too. 1 never doubted what I was told: Heaven and earth are great, but greater still isthe kindness of the Communist Party; fatherand mother are dear, but dearer still isChairman Mao. With my red Scarf , the emblem of the YoungPioneers, tied around my neck, and my heartbursting with joy, I achieved and grew everyday until that fateful year, year I was twelve years old, in year the Cultural Revolution liberation ARMY DANCERC hairman Mao, our beloved leader, smileddown at us from his place above theblackboard. The sounds and smells of thetantalizing May afternoon drifted in throughthe window. The sweet breeze carried thescent of new leaves and tender young grass andrippled the paper slogan below ChairmanMao s picture: STUDY HARD AND ADVANCE EVERY DAY.

9 Inthe corner behind me the breeze also rustledthe papers hanging from the Students Garden,a beautifully decorated piece of cardboard thatdisplayed exemplary work. One of them wasmy latest perfect math were having music class, but we couldn tkeep our minds on the teacher s directions. Wewere all confused by the two-part harmony ofthe Young Pioneers Anthem. We are YoungPioneers, successors to Communism. Our redscarves 4utter on our chests, we sang over andover, trying to get the timing right. The oldblack pump organ wheezed and squeaked asimpatiently as we did. We made another start,but Wang Dayong burst out a beat early, andthe whole class broke into then Principal Long appeared at thedoor. She walked in, looking less serious thanusual, and behind her was a stranger, abeautiful young woman dressed in the People sLiberation Army uniform.

10 A liberation Armysoldier! She was slim and stood straight as areed. Her eyes sparkled, and her long braids,tied with red ribbons, swung at her was not a sound in the classroom as allforty of us stared at her in Long told us to stand up. Thewoman soldier smiled but did not speak. Shewalked up and down the aisles, looking at usone by one. When she 9nished, she spokequietly with Principal Long. Tong Chao andJiang Ji-li, Principal Long announced. Comewith us to the gym. A murmur rose behind usas we left the room. Tong Chao looked at meand I looked at him in wonder as we followedthe swinging gym was empty. I want to see how 4exible you are. Let melift your leg, the liberation Army woman saidin her gentle voice. She raised my right legover my head in front of me. 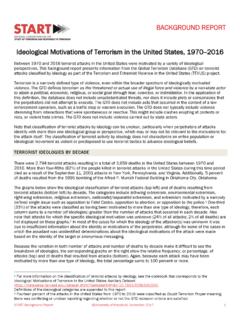 Ideological Motivations of Terrorism in the United States ...

{Every being on this earth is endowed with the five senses of sight, hearing, taste, smell and touch. These five senses alone make up the world we see. Each of these senses help in perceiving the world in front of us. But instead of using these senses to the betterment of oneself, an ignorant man chases sense pleasures madly, without control.

earth. Once the door is closed, prayers and songs of gratitude are offered to the Spirits and energies representing that particular direction. The fourth time the participants leave the lodge, emerging from dark to light which represents the liberation from the physical universe. All that is impure is left behind in the sweat lodge. Etiquette 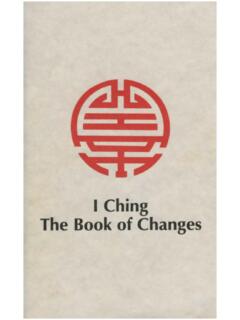 I Ching The Book of Changes - mocagh.org

--Earth above, Water below. -----Cooperation. The receptive earth holds the water. and the wise person will find strength in the company of many fellows. With leadership there will be correct persistence and good fortune. Hexagram 8: Water above, Earth below. = = Unity. = = The receptive earth beneath. with profundity - - above, indicates the need 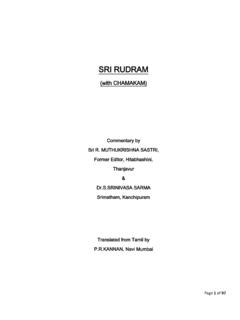 right upto Liberation, नः- us, ऄिभचाकशीिह- grant the knowledge of Atmatatva (Self-Principle). Explanation: Abhinavasankara comments that having prayed for worldly pleasures in the previous mantra, happiness of Liberation is prayed for in this …

surface-earth of the garden, dug so that it was slightly larger than a mouse and slightly smaller than a cat’s foreleg, provided access, air, and even a fair amount of light to the living room. The bedroom, formed by the second oval, was warm but dark, even at midday. A short tunnel through the earth behind the block connected the two rooms.