3 I. INTRODUCTION. The amount of toxic soluble Solids in Waste Water has drastically increases because of the use several house hold and industrial chemicals. Goal to achieve the effective recycling of Waste Water in order to overcome the scarcity of Water has gained considerable interest these days. Purification of Waste Water is the process of removing undesirable chemicals, biological contaminants, Dissolved Solids and suspended Solids from contaminated Water . Different steps are adopted in the treatment of Waste Water but Dissolved Solids are not removed to a satisfactory level. Adsorbents gained attention from scientific community due to its effectiveness in different fields..Adsorbents plays a crucial role in treatment of domestic as well as Waste Water . Hence the generation of cheaper and economical adsorbents also gained significant attention these days.

6 The reaction between steam and charcoal takes place at the internal surface area, creating more sites for adsorption. The temperature factor, in the process of activation was considered very important because below 900 oC the reaction becomes too slow and is very uneconomical and above 1100 oC the reaction becomes diffusion controlled and therefore takes place on the outer surface of the charcoal resulting in loss of charcoal. III. TREATMENT OF Waste Water WITH activated carbon . Waste Water collected from the college premises was subjected to analysis for total Dissolved salts (TDS) before and after treatment with activated carbon prepared from coconut shell. Waste Water was allowed to stir with activated carbon using a magnetic stirrer for various intervals such as 5 minutes, 30 minutes and 60 minutes. TDS was determined before and after treatment with activated carbon for various intervals using Systronics TDS meter.

7 Treatment of Waste Water using activated carbon was carried out at room temperature. After treating with activated carbon , it was filtered using Whatman filter paper and filtrate was used for the estimation of TDS. IV. RESULTS AND DISCUSSION. From the table given below it is clear that, the amount of Dissolved salts has considerably decreased by increasing the time of treatment with activated carbon . This clearly indicates that activated carbon prepared from coconut shell is highly efficient in treatment of Water especially in removing the Dissolved Solids . There are different methods available for the Removal of Dissolved salts but most of them are expensive methods and a common man cannot afford those methods. This method is an economically viable and suitable one for reasonably contaminated Water . The data obtained are summarized in the table given below.

8 Table 1. Results & Discussion Time of treatment in minutes TDS Permitted Value 0 750 mg/l 500 mg/l 5 555 mg/l 500 mg/l 30 257 mg/l 500 mg/l 60 50 mg/l 500 mg/l The data given in the above table can be graphically represented as below. From the graph it is clear that the amount of Dissolved Solids decreases with increase in the time of treatment. From the trend shown in the graph, we can come to a conclusion that stirring for a period of seventy minutes could completely remove the Dissolved Solids present in Waste Water . Fig. 2: Results It is also observed that stirring for a period of nearly 10 minutes can bring the TDS level to a level just below the permitted value. In order to make this a cost effective process, one could select time of stirring between 20 and 30 minutes for an effective Removal of Dissolved Solids in Waste Water . It is also expected that a considerable reduction in the TDS can be achieved quickly at higher temperatures.

9 But a room temperature process is always preferred over a higher temperature one due to energy concerns. This clearly indicates an effective reduction of TDS present in Waste Water by treating with activated carbon from coconut shell for a period of 20 to 30 minutes. The extent of Removal of Dissolved Solids from Waste Water is an indication of the very high surface area of the activated carbon prepared in this study. With increase in surface area, the number of sites for adsorption also increases. Now a days adsorption chemistry plays a crucial role in many areas especially in Water purification. Various adsorbents are known but the importance of activated carbon is still outstanding. We know the use of charcoal for removing impurities for a long time. But All rights reserved by 6. Removal of Dissolved Solids in Waste Water using activated carbon from Coconut Shell (J4R/ Volume 02 / Issue 07 / 002). 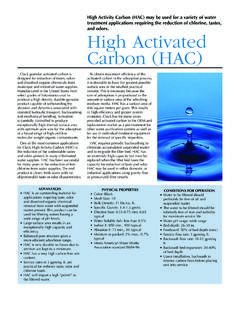 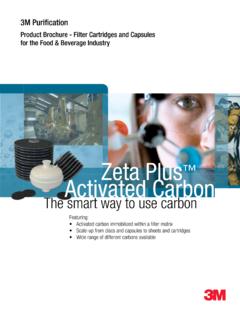 Featuring: Activated carbon immobilized within a lter matrix Scale-up from discs and capsules to sheets and cartridges Wide range of different carbons available 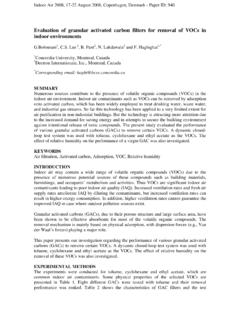 In China, work has been carried out on solar powered refrigerators using different adsorption pairs such as calcium chloride+ammonia, Zeolite+water and activated carbon+methanol. 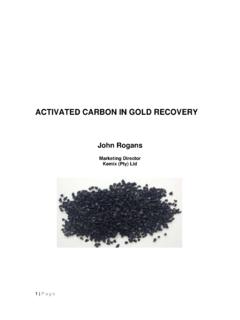 3 | P a g e 1. INTRODUCTION This article serves to discuss the fundamental aspects of gold recovery utilizing the Carbon-in-Pulp or Carbon-in-Leach processes. 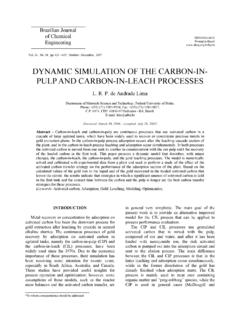 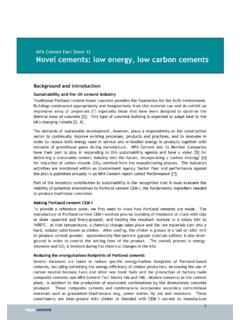