3 Non-governmental Organizations (NGOs) have an important role to play in the process. Adequately defining and playing that role during the last twenty years in LIBERIA has been rather difficult task for both NATIONAL and international NGOs. A major contributing factor was the lack of clarity in policies that would provide guidance in NGOs decision-making processes and their field operations. The need to fill this gap became an urgent priority of the Government. This POLICY intends to provide that needed guidance. In real terms, the POLICY prescribes a reasonable set of guidelines aimed at delivering four results: First, they would ensure better coordination among various ministries/agencies involved with the operations of NGOs. Second, the POLICY guidelines would ensure a coherent process for the accreditation of NGOs and the distribution of their programs and activities Third, they would provide a conducive environment for the smooth operations of NGOs and for ensuring stronger accountability and transparency with the NGOs sector.

4 Finally, these guidelines would put in place a systematic approach to the building of requisite capacities and a stronger framework within which both local and international NGOs can work. The provisions contained in this POLICY are in direct response to the various concerns raised during our extensive consultations. Concerns with respect to the working relationship between specific NGOs and local authorities; the impact felt by the ordinary person as a result of the operations of an NGO in a locality; and the proliferation of NGOs and the lack of information on NGO activities. In short, we do hope that these guidelines will better place NGOs contribution within the NATIONAL Development Agenda as the country moves towards our expressed shared NATIONAL vision. On behalf of the Government and the Liberian people, I would like to express my sincere thanks and gratitude to all those in government functions, the United Nations family, the NGO community and consultants- who have contributed to the conceptualization and preparation of this POLICY .

5 Living it out effectively is now the challenge to all of us. These guidelines will come to effect on June 15th 2008. Sincerely, Toga McIntosh Minister of Planning and Economic Affairs 4. Context The role and importance of civil society organizations (CSOs) cannot be over- emphasized as it is part and parcel of the life of its people. Historically, the traditional societies, social clubs, economic clubs (susu), community service and work groups have operated throughout LIBERIA . Later, faith-based organizations emerged and facilitated the transformation and socio-economic development of the country, especially in the areas of education, health and spiritual development. The 70's and 80's saw the emergence of modern day CSOs with a focus on capacity building, human right, advocacy and development issues.

6 The number of these organizations and the magnitude and level of their influence may have warranted the development or formulation of guidelines or POLICY to guide their operations at the time. Their operations in general buttressed government efforts in ensuring peaceful coexistence, stability and NATIONAL development. The war years (1989-2003), shattered the governance structure and systems, the rule of law disappeared and a humanitarian crisis arose that needed immediate attention which no NATIONAL authority could address. The international community had to take the lead in ensuring not only the provision of humanitarian assistance, but also the protection of life and property and eventual return to peace. Non Governmental Organizations (NGOs). became the main instruments through which such support could be provided.

7 The international NGOs, which had the resource base provided the lead. The arrival of international NGOs during this period gave an impulse to the establishment and growth of additional local NGOs. In some cases, they formed partnerships for the delivery of needed humanitarian services to the affected population. The contribution of these organizations to the survival of the affected population and return to peace has been commendable. The proliferation of NGOs in LIBERIA has however brought to light a number of concerns regarding their activities. These concerns have not only been expressed by NGOs themselves but also by governmental authorities and the general public. These concerns are reflected below: The NGOs have expressed the following key concerns: The absence of clear guidelines for NGO operations culminates in complexities in obtaining incorporation and accreditation The lack of decentralized accreditation procedures The propagation of demands from different government institutions for the submission of various reports.

8 Instead of a centralized reporting mechanism The absence of published and transparent fee structures The incidence of corruption on the part of certain public officials The harassment of field workers by local officials The new international aid modalities operates to marginalize NATIONAL NGOs The existence of competition between NATIONAL and international NGOs The inadequacy of capacity building and partnership mechanisms to support NATIONAL NGO programs The inadequacy of government efforts to inform and involve civil society in its development agenda 5. The Government has raised the following key concerns: There is little or no reference and engagement by NGOs with line ministries and local authorities Duty free privileges are abused Some NGOs evade payment of required taxes Some portions of the laws of LIBERIA are compromised or disregarded There is little or no level of sustainability of NGO projects Some NGO projects and programs are not in line with the Government's development agenda While acknowledging the contributions NGOs have made to the country, the public expressed the following key concerns including.

9 Very little impact on beneficiaries Little or no input from target beneficiaries during the project cycle Proliferation of NGOs Skewing of NGOs' activities Underutilization of local NGOs Prioritizing relief activities over development, despite the transition to development Disrespect towards local authorities Inadequate accountability Inadequate transparency With the return to democratic governance in 2006, the need for reform has taken center stage. Additionally the development of appropriate policies, strategies and structures to guide the thrust and direction of socio-economic development is central to the reform agenda. As NGOs are essential partners in identifying, defining and developing policies and driving development in LIBERIA , this POLICY seeks to address the above concerns and ensure that an enabling environment is created for the smooth operation of NGOs, as well as ensuring human development.

10 It is an integral part of the ongoing reform exercise. The over riding and long-term objective is to provide better and more effective service to the Liberian people and nation. 6. 1 Background The involvement of civil society in development predates the formation of the modern Liberian state. Indigenous institutions such as the Kuu, Susu, Poro, Sande and other forms of community traditional structures have for centuries continued to provide support for people's development even without outside intervention. The Liberian state is said to have been founded through the initiatives of the American Colonization Society (ACS) in 1822, a civil society organization. Religious institutions catering to the needs of their members also stimulated development activities. By the mid 1980s more than one third of the Liberian people attended NGO run schools and hospitals and were benefiting from community development programmes implemented largely by Liberian civil society actors. 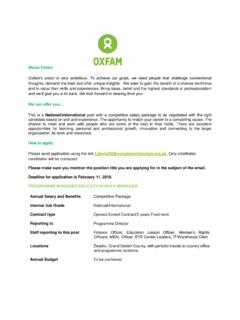 Oxfam’s vision is very ambitious. To achieve our …

About Oxfam Oxfam’s vision is very ambitious. To achieve our goals, we need people that challenge conventional thoughts, demand the best and offer unique insights. 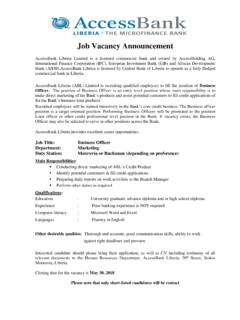 Invitation to submit expressions of interests to …

AN ACT OF LEGISLATURE PRESCRIBING A … Devise a visit schedule and visit the farms of the contracted farmers on a regular basis. Offer and provide regular remote consultation with farmers and agricultural businesses 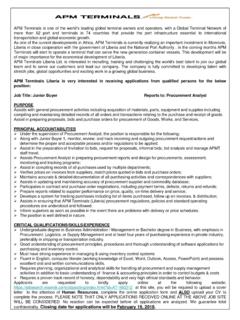 APM Terminals is one of the world’s leading global ...

APM Terminals is one of the world’sleading global terminal owners and operators, with a Global Terminal Network of more than 62 port and terminals in 74 countries that provide the port infrastructure essential to international 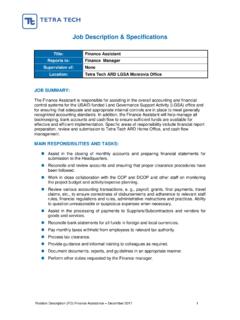 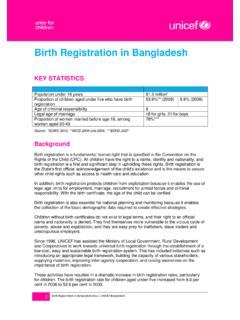 PPC CSI March 2016 5 6. WHAT HAPPENS AFTER SUBMISSION? Your application will undergo an assessment by the Corporate Social Responsibility department. You shall receive feedback on the status of your application within 14-21 working 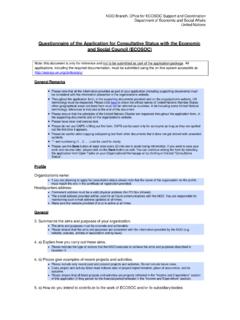 Questionnaire of the Application for Consultative …

NGO Branch, Office for ECOSOC Support and Coordination Department of Economic and Social Affairs United Nations Questionnaire of the Application for Consultative Status with the Economic 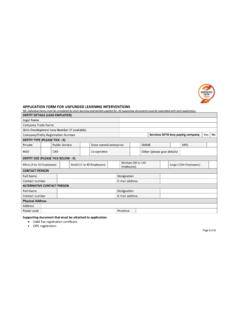 Page 1 of 2 APPLICATION FORM FOR UNFUNDED LEARNING INTERVENTIONS NB: Individual forms must be completed for each learning intervention applied for. All supporting documents must be submitted with each application. A Practical Guide to the Financial Management of …