REPUBLIC OF SOUTH AFRICA IN THE LABOUR APPEAL COURT OF SOUTH AFRICA, CAPE TOWN JUDGMENT Reportable Case no: CA 11/13 In the matter between: THE WESTERN CAPE EDUCATION DEPARTMENT Appellant

2 Remedy- consideration of fairness in granting remedy- re- instatement uncommon for constructive dismissal- employee showing undisputed evidence circumstances prevailing at the time of seeking re- instatement different to those at the time of his resignation- LABOUR court Judgment upheld- appeal dismissed with costs. 2. Coram: Davis JA Molemela et Sutherland AJJA. _____. JUDGMENT. MOLEMELA AJA. Introduction [1] This is an appeal against the judgment of the LABOUR court (Steenkamp J), dismissing an application brought by the appellant to review an award of the second respondent, acting under the auspices of the first respondent, in which the second respondent ( the commissioner ) found that the third respondent ( Mr Gordon ) was constructively dismissed by the appellant and ordered that he be re-instated.

3 The appeal is brought with leave of the LABOUR court . Background facts [2] Mr Gordon was employed in the public service from 1986 and later occupied the position of a Deputy Director: Personnel Management. He reported to a certain Mr Elliot, who was the Human Resources (HR) Director. Mr Gordon suffered a heart attack in July 2006. He recovered but after a while started experiencing anxiety attacks. He was eventually diagnosed with post- traumatic stress disorder and clinical depression. [3] Mr Gordon returned to work on 8 January 2007. He struggled to cope and was booked off-sick from mid-February 2007.

4 He was hospitalised on 27. March 2007. He requested that he be granted an ill-health retirement. He was advised to submit an affidavit. On 2 June 2007, he duly submitted an affidavit in support of his application for ill-health retirement and also applied for temporary incapacity leave. He handed his application and supporting documents over to Mr Elliot, who undertook to personally attend to Mr Gordon s application. On Mr Gordon s request, Mr Elliot undertook to see to it that the form was duly signed by two witnesses. Mr Gordon thereafter submitted medical certificates on a monthly basis as proof of his inability to work.

5 3. [4] Mr Daniels took over from Mr Elliot as HR Director. In September 2008, Mr Daniels visited Mr Gordon at his home and made enquiries pertaining to his illness and his return to the workplace. Mr Gordon informed him that he had still not heard anything from the appellant regarding his application for ill- health retirement and temporary incapacity leave. [5] On 3 December 2008, Mr Gordon received a letter from the appellant acknowledging receipt of medical certificates covering the period up to 30. September 2008 but pointing out that no medical certificates had been submitted since that date.

7 [7] In April/May 2009, Mr Gordon received a letter from the appellant s Mr Wilkinson, indicating, inter alia that his application for temporary incapacity leave that had been submitted in 2007 had not been processed because the application form had not been signed by two witnesses. He was asked to re- submit the form in question. On 11 June 2009, he referred a grievance to the appellant and also alluded to the mysterious disappearance of his application for temporary incapacity leave. The application form re-surfaced in his office more or less on 3 July 2009, when it was slipped underneath his door in his absence.

8 Mr Gordon stated that he could only re-submit his application on 07. August 2009. [8] What had transpired in the meantime was that on 26 June 2009, the appellant had sent Mr Gordon a letter notifying him that as a result of his failure to re- submit his temporary incapacity leave, the appellant had decided to grant 4. leave without pay in respect of his absence from work for the period 31 July 2006 to 06 February 2009. On 2 July 2009, Mr Gordon received a letter from the appellant informing him that, in terms of section 38 of the Public Service Act of 1994, the appellant was going to recover from his salary a total sum of R753 , which was the total amount paid to him when he was absent from work.

9 He was advised that the aforesaid amount would be deducted from his salary at the rate of R 12 000 per month. He realised that after all deductions, he would be left with a net income of R2 159 per month. [9] Mr Gordon contacted the appellant and requested it to place a moratorium on the deductions pending consideration of his application for temporary incapacity leave. He lodged another grievance. He did not receive any response. He tendered his resignation on 1 July 2009. A grievance meeting was held on 3 July 2009 between Mr Gordon, Mr Daniels and a Mr Faker.

10 He was given two options: (i) he could proceed with his resignation, or (ii) he could retract it. In the event of him choosing the latter option, Mr Daniels would assist him with his application for ill-health retirement. He was further advised that irrespective of the option he chose, Mr Daniels and Mr Faker would approach the Head of Department regarding the appellant s decision to apply a policy of leave without pay in respect of his absence from work and the resultant deductions. Mr Gordon retracted his resignation on 29 July 2009. [10] On 4 August 2009, Mr Gordon sent an e-mail to the appellant enquiring whether a decision had been made regarding the refund of the amount of R12 that had already been deducted from his salary at the end of July 2009.

Affidavit on Indigency (Filing Original Action) Rule 145, Texas Rules of Civil Procedure 1 Note: A party who is unable to afford costs is a person who is presently receiving a governmental entitlement based on indigency or any other person who has no ability

• Fill out the Original Petition for Divorce and sign it. You are the Petitioner. Your spouse is the Respondent. • If you are poor, are receiving public assistance, or do not think you have enough money to pay the court costs 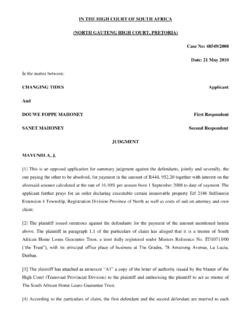 IN THE HIGH COURT OF SOUTH AFRICA (NORTH …

2015/05/06 7 voluntary surrender-how it is presented to court • always high court • by motion proceedings • usual documents for motions: – notice of motion 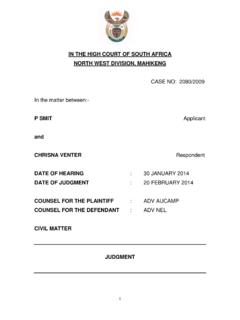 IN THE HIGH COURT OF SOUTH AFRICA NORTH …

1 IN THE HIGH COURT OF SOUTH AFRICA NORTH WEST DIVISION, MAHIKENG CASE NO: 2080/2009 In the matter between:- P SMIT Applicant and