Review of Code Provisions on Seismic Analysis of …

2 The codes reviewed are: ACI , AWWA standards, API 650, NZSEE. guidelines and Eurocode 8. It is noted that all the codes use mechanical analogues to evaluate hydrodynamic forces, particularly due to lateral base excitation. The Provisions on inclusion of effect of vertical excitation are not covered in all codes. Provisions of soil-structure interaction, buried tanks, flexibility of piping are either not addressed or are given in only qualitative terms. A brief description on limitations in Indian code is also presented. 1. INTRODUCTION. In the first part of this paper (Jaiswal et. al., 2003) Provisions on design Seismic forces for liquid storage tanks from various international codes were reviewed. In this paper, Provisions related with the Analysis and modeling of tanks are being considered. Seismic Analysis of liquid storage tanks requires special considerations.

3 These special considerations account for the hydrodynamic forces exerted by the fluid on tank wall. Knowledge of these hydrodynamic forces is essential in the Seismic design of tanks. Evaluation of hydrodynamic forces requires suitable modeling and dynamic Analysis of tank- liquid system, which is rather complex. However, availability of mechanical models (analogues) of tanks has considerably simplified the Analysis . These mechanical models, convert the tank- liquid system into an equivalent spring- mass system. Design codes use these mechanical models to evaluate Seismic response of tanks. While using such an approach, various other parameters also get associated with the Analysis . Some of these parameters are: Pressure distribution on tank wall due to lateral and vertical base excitation, time period of tank in lateral and vertical mode, effect of soil-structure interaction and 2.

4 Review of Seismic Analysis of liquid storage Tanks maximum sloshing wave height. Design Codes have Provisions with varying degree of details to suitably evaluate these parameters. In this paper, Provisions given in various codes on Seismic Analysis of tanks are reviewed. Codes considered are: ACI , AWWA D-100, AWWA. D-110, API 650, Eurocode 8 and NZSEE guidelines. The Review will in particular focus on following aspects: i) Mechanical model and its parameters ii) Hydrodynamic pressure due to lateral and vertical excitation iii) Time period of tank in lateral and vertical mode iv) Effect of soil flexibility 2. Review OF CODAL Provisions . Provisions given in ACI , AWWA D-100, AWWA D-110, API 650, Eurocode 8 and NZSEE guidelines will be reviewed. It may be noted that some of these codes deal with only specific types of tanks. Table 1 provides details of types of tanks considered in each of these codes.

6 It may be noted that heights hi and hc are used when base pressure is not considered. If base pressure is included then corresponding heights are denoted by h'i and h'c respectively. 3. Review of Seismic Analysis of liquid storage Tanks Historically, mechanical models were first developed for tanks with rigid walls. Housner (1963) was perhaps the first to propose such a mechanical model for circular and rectangular rigid tanks (Figure 1). Wozniak and Mitchell (1978) have generalized the Housner's model for short and slender tanks. Veletsos and Yang (1977) have used a different approach to arrive at a similar type of mechanical model for circular rigid tanks. Subsequently, Haroun and Housner (1981) and Veletsos (1984) have developed mechanical models for flexible tanks. Malhotra et. al. (2000) have further simplified the flexible tank model of Veletsos (1984).

9 Eurocode 8 mentions mechanical model of Veletsos and Yang (1977) as an acceptable procedure for rigid circular tanks. For flexible circular tanks, models of Veletsos (1984) and Haroun and Housner (1981) are described along with the procedure of Malhotra et. al. (2000). For rigid rectangular tanks it suggests model of Housner (1963). The procedure given in NZSEE guidelines is also described in Eurocode 8 for evaluating impulsive and convective mass of horizontal circular tank. An important point while using a mechanical model pertains to combination rule used for adding the impulsive and convective forces. Except Eurocode 8, all the codes suggest SRSS (square root of sum of square) rule to combine impulsive and convective forces. Eurocode 8 suggests use of absolute summation rule. For evaluating the impulsive force, mass of tank wall and roof is also considered along with impulsive fluid mass.

10 ACI and Eurocode 8. suggest a reduction factor to suitably reduce the mass of tank wall. Such a reduction factor was suggested by Veletsos (1984) to compensate the conservativeness in the evaluation of impulsive force. Time period of impulsive mode Impulsive mode refers to lateral mode of tank- liquid system. Lateral Seismic force on tank depends on the impulsive mode time period. Time period of tank-fluid system depends on the flexibility of support also. Table 2 gives details of the expressions used in various codes to evaluate the impulsive mode time period. For fixed base circular tanks, ACI uses formula given by Veletsos (1984), whereas NZSEE guidelines have adopted the formula from Haroun and Housner (1981). Eurocode 8 has followed the expression given by Sakai et. al. (1984). Eurocode 8 also gives the expression suggested by Malhotra et. 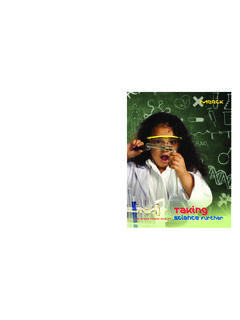 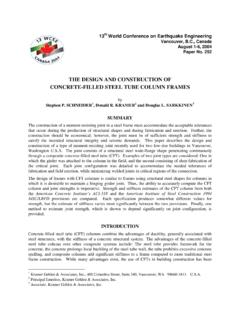 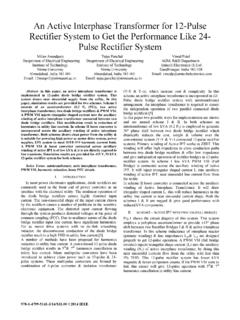 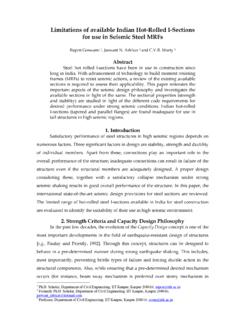 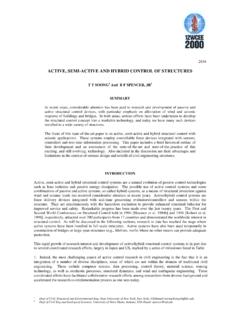 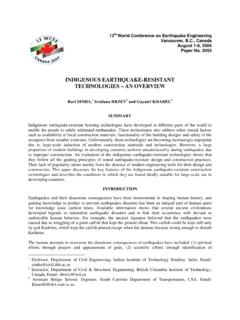 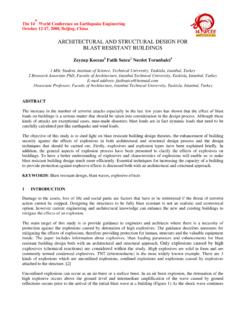 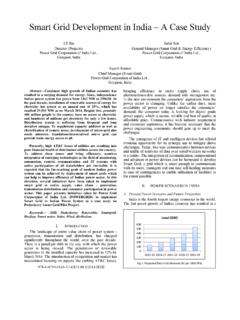 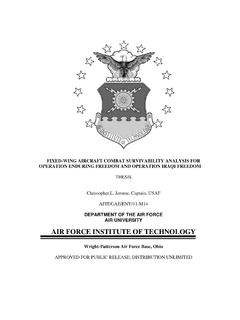 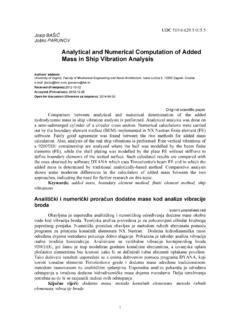 Analytical and Numerical Computation of Added … 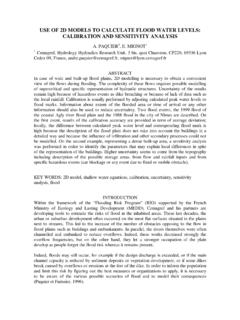 USE OF 2D MODELS TO CALCULATE FLOOD W …

© 2005 Hongshen Ma 4 Important note: This document is a rough draft of the proposed textbook. Many of the sections and figures need to be revised and/or are 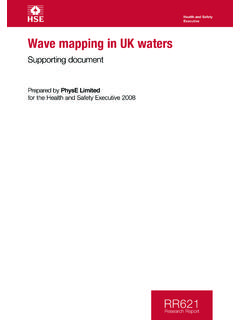