Review of the Impact of Intermetallic Layers on the ...

6-03-15 IVF Project Report 06/07 Review of the Impact of Intermetallic Layers on the Brittleness of Tin-Lead and Lead-Free Solder Joints Per-Erik Tegehall, Ph.D.

4 One reason for that is the higher elastic modulus of lead-free solders compared to tin-lead solder . Another reason is that thicker and more complex Intermetallic Layers may form when lead-free solders are used. Brittle fractures are caused by a high level of applied strain and strain rate. The most common situation causing brittle fractures is bending of assemblies. Bending causing brittle fractures can occur during assembly, testing, and shipping but also if a product is exposed to mechanical chock, for example by dropping it to the ground. Other causes of strain-induced fractures are fast temperature changes and vibration. A failure due to brittle fracturing may be the result of one single high-strain event or many consecutive events at a lower strain level. After soldering, there are residual stresses in the solder joints that slowly decline as a result of creep in the solder . Due to these residual stresses, solder joints are more inclined to brittle fractures the first days after soldering and they are especially vulnerable directly after soldering.

5 solder joints to area array components, especially large BGA components, are more inclined to brittle fractures than solder joints to other types of components. The brittle fracture takes place in the layer of Intermetallic compound (IMC) that is formed at the solder /metal interface during soldering. While the IMC layer is necessary for achieving a reliable solder joint, it is usually hard and brittle. The composition, structure, and brittleness of the IMC layer are affected by the composition of the solder and the metal finish on the soldered surface. Although many different types of surface finishes are used on solder lands and component leads and terminations, the IMC Layers are almost exclusively formed to one of three metal surfaces; copper, electrolytic nickel, or electroless nickel. Other finishes plated on top of these are normally completely dissolved in the solder . The IMC layer formed on copper when soldering using tin-lead solder consists of Cu6Sn5.

6 A second layer consisting of Cu3Sn forms at the Cu6Sn5/Cu interface during high temperature aging. The IMC layer formed on electrolytic nickel consists normally of Ni3Sn4. This compound is also formed on electroless nickel but the IMC layer formed on this finish contains other Intermetallic compounds as well. Brittle fractures on assemblies soldered using tin-lead solder have mainly been reported to occur when the PCBs or the components have solder lands with electroless nickel/immersion gold (ENIG) finish. Some of these brittle fractures have been caused by a plating defect on the ENIG finish called black pad . However, solder joints formed on ENIG have been found to be prone to brittle fractures also in the absence of this defect. Electroless nickel contains phosphorus. During both immersion gold plating and soldering, nickel is selectively dissolved from the surface. This results in an IVF Project Report 06/07 5 D:\PET\ PER-ERIK TEGEHALL, 10 MARCH 2006 enrichment of phosphorus and the formation of a Ni3P layer at the uppermost nickel surface.

7 The black pad defect is caused by too extensive dissolution of nickel during immersion gold plating. The extensive dissolution of nickel leads to the formation of a thick Ni3P layer but also to etching of the nickel underneath the gold coating. Due to this over-etching, nickel surfaces are exposed to oxidation, and plating residues may be trapped beneath the gold coating. Enrichment of Ni3P at the nickel surface combined with oxidation of exposed nickel surfaces and entrapment of plating residues renders wetting and the formation of a proper IMC layer during soldering more difficult. As a result, the solder joint will be weaker than normal and, when exposed to stress, a fracture may occur at the Ni3P/Ni3Sn4 interface. The defect is called black pad since the nickel surface that is exposed when a crack occur is usually dark grey to black due to the enrichment of Ni3P. Although it was at first believed that a high phosphorus content in the nickel promoted the formation of black pad defects, it is today generally considered that a high phosphorus content decreases the risk for black pad defects.

8 Results from recently performed investigations indicate that the brittleness of solder joints to electroless nickel in the absence of black pad defects is caused by a very thin IMC layer containing Ni, Sn and P formed between the Ni3Sn4 and Ni3P Layers during soldering. There are different opinions on how the phosphorus content in electroless nickel affects the risk for brittle fractures in this layer. Results from some investigations indicate that the risk increases with increasing phosphorus content whereas results from other investigations indicate the opposite. Electrolytic nickel does not contain phosphorus and solder joints to electrolytic nickel are therefore less inclined to brittle fractures. However, electrolytic nickel is normally coated with a rather thick layer of gold. The gold is dissolved in the solder during soldering but may form a second IMC layer consisting of (Au,Ni)4Sn on top of the Ni3Sn4 layer when the solder joint is aged.

9 Severe embrittlement of solder joints has been observed after high temperature aging due to formation of this dual IMC layer. Brittle fracturing in the IMC Layers formed on copper has hardly ever been reported to occur in the field for solder joints with tin-lead solder . Nevertheless, it may become a problem for lead-free products used at high temperatures for a long time. Extensive formation of Kirkendall voids may occur in the Cu3Sn layer or at the Cu3Sn/Cu interface when exposed to temperatures above 100 C, perhaps even at lower temperatures. The formation of Kirkendall voids results in a significantly increased risk for brittle fractures. Impurities in the copper and the higher soldering temperature used for lead-free soldering seem to be the main causes for the formation of Kirkendall voids. When soldering to nickel surfaces using lead-free solders, the copper content in the solder will be important for the composition, structure and brittleness of the IMC Layers formed.

10 With SnAg solder , Ni3Sn4 will form, just as it does for SnPb solder . On electroless nickel, spalling (detachment) of this layer may occur leading to a thicker NiSnP layer being formed at the Ni3Sn4/Ni interface and thereby probably an increased risk for brittle fractures. If the solder contains more IVF Project Report 06/07 6 D:\PET\ PER-ERIK TEGEHALL, 10 MARCH 2006 than Cu, (Cu,Ni)6Sn5 will form instead of Ni3Sn4. At lower copper concentrations, a dual IMC layer may form consisting of (Cu,Ni)6Sn5 and (Ni,Cu)3Sn4 with the latter phase closest to the nickel surface. This dual layer may also form when solder joints with more than Cu are aged. Very few studies have been performed of how this dual IMC layer affects the risk for brittle fractures but the results from one study indicate a significantly increased brittleness . Copper-containing IMC Layers may also form when soldering to nickel using SnAg solder if an opposite solder pad or component lead/termination has a copper surface.

3 3 SOLDER PRODUCTS Cored solder wires, as used in most hand soldering, comprises an alloy wire containing one or more flux cores. During soldering the metal wire is melted to join other metal surfaces whilst 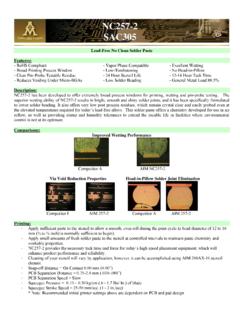 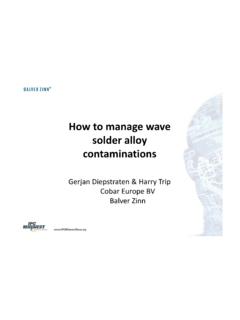 EPO-TEK® H20E Technical Data Sheet For Reference Only Electrically Conductive, Silver Epoxy Epoxies and Adhesives for Demanding Applications™ This information is based on data and tests believed to be accurate.