Risk-led policing of domestic abuse and the DASH …

Risk-led policing of domestic abuse and the DASH risk model Amanda L. Robinson, Andy Myhill, Julia Wire, Jo Roberts and Nick Tilley college of policing , September 2016. All rights reserved. No part of this publication may be reproduced, modified, amended, stored in any retrieval system or transmitted, in any form or by any means, without the prior written permission of the college of policing or its representative. Not protectively marked. The college of policing will provide fair access to all readers and, to support this commitment, this document can be provided in alternative formats.

Acknowledgements The research was conducted under the auspices of the What Works Centre for Crime Reduction, funded by the ESRC and College of Policing.

1 Risk-led policing of domestic abuse and the DASH risk model Amanda L. Robinson, Andy Myhill, Julia Wire, Jo Roberts and Nick Tilley college of policing , September 2016. All rights reserved. No part of this publication may be reproduced, modified, amended, stored in any retrieval system or transmitted, in any form or by any means, without the prior written permission of the college of policing or its representative. Not protectively marked. The college of policing will provide fair access to all readers and, to support this commitment, this document can be provided in alternative formats.

2 For enquires about this document, or to request an alternative format, please email the college contact us' inbox The views in this report are those of the authors, not necessarily those of the college of policing (nor do they reflect college of policing policy). Executive summary Key findings and implications There was widespread support for risk assessment from both police and partners. The DASH risk tool was not applied consistently at the frontline. Officers sometimes used discretion not to submit a form, specific questions were altered or omitted, and information was sometimes recorded in an inconsistent or incomplete way.

3 Police officers and staff appeared to prioritise criminal offences and especially physical violence and injury at the current incident at both the initial and secondary stages of risk assessment. An evidence-based approach to Risk-led policing is needed. An understanding of coercive control needs to be embedded within a Risk-led approach. A revised risk tool for frontline officers should place a greater emphasis on patterns of abusive behaviour. A more thorough risk/needs assessment is best undertaken by those with specialist training.

4 Introduction In 2009, National policing leads endorsed a risk model to support and improve the police response to cases of domestic abuse : the domestic abuse , Stalking and Harassment and Honour-based violence risk identification, assessment and management model (DASH). The DASH model has not been subject to systematic empirical evaluation since its implementation. In 2014, under the auspices of the What Works Centre for Crime Reduction, and following a recommendation in a review of police response to domestic abuse by Her Majesty's Inspectorate of Constabulary (HMIC), a research project was commissioned to investigate the ways in which Risk-led policing of domestic abuse takes place across England and Wales.

5 Research methods The research consisted of a national mapping exercise followed by in-depth fieldwork in three police force areas. The fieldwork was wide ranging and included face-to-face interviews with police and partner agencies (n=61 interviews), observations of frontline responses to incidents (n=120 hours), force-wide surveys (n=1296 responses), and case files retrieved from force IT systems (n=2180). Findings A majority of forces in England and Wales were using the DASH risk model for domestic abuse either in its original form (n=28) or in an altered form (n=10) at the time of an inspection by HMIC in 2014 (HMIC, 2014: 68).

6 The national mapping exercise enabled the identification of three different models of Risk-led policing of domestic abuse : 1. Frontline officers identify risk factors via the DASH interview at the time of an incident, but i do not apply a risk grading; a risk grading is applied in all cases by a specialist officer or member of police staff. 2. Frontline officers attending an incident both identify risk and apply an initial risk grade and a secondary risk assessor reviews a subset of cases (those graded as medium' and high'.)

9 As there are significant drawbacks to each model, none can be recommended as best practice. Observations of officers responding to domestic abuse incidents showed variations in the way the DASH interview was conducted and an inconsistent approach to recording data derived from the DASH questions. Interviews with partner agencies as well as the police revealed that the quality and completeness of the DASH forms were common sources of concern. Consistent with previous research, this study also found that: A lack of understanding of coercive and controlling patterns of abusive behaviour can have implications for what is classified as domestic abuse and therefore subject to risk assessment.

10 A tendency for the police to focus on physical violence and what has occurred at the current incident can result in them missing abuse which is characterised not by physical violence and injury but by continuous coercion and control in other forms. A lack of understanding of coercive control, and the absence of a working knowledge of coercive control underpinning judgements of risk, was observed not only at the frontline, but also to some degree at the secondary risk assessment stage. Overall, and in accordance with HMIC's recent inspections, we observed an often process- driven approach to domestic abuse , which was of variable and inconsistent quality and often not fully understood or properly implemented by the officers involved. 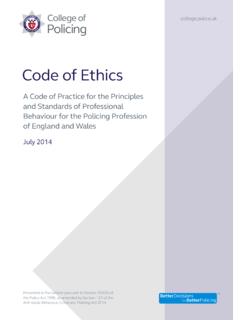 Code of Ethics - College of Policing

college.police.uk Code of Ethics A Code of Practice for the Principles and Standards of Professional Behaviour for the Policing Profession of England and Wales

Competency and Values Framework - College of …

Competency and Values Framework for ... - College … 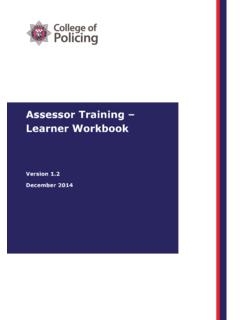 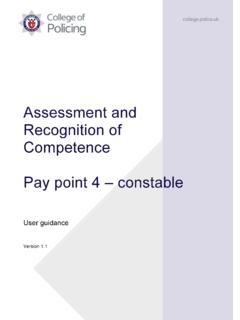 Assessment and Recognition of Competence Pay … 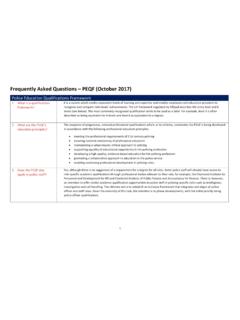 1 Frequently Asked Questions – PEQF (October 2017) Police Education Qualifications Framework 1. What is a qualifications framework? It is a system which credits equivalent levels of learning and expertise and enables employers and education providers to 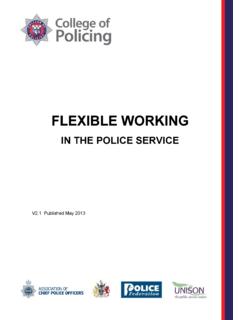 7 The Benefits of Flexible Working The benefits for the Police Service of flexible working include: • retention of valuable officers and staff;

Competency and Values Framework for ... - College … 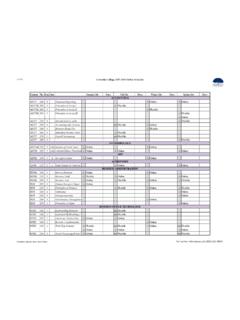 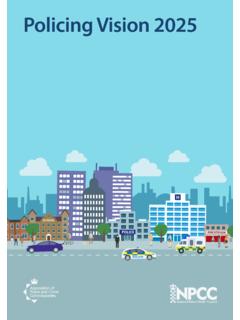 2 Introduction POLICE This Policing Vision 2025 sets out our plan for policing over the next ten years. It will shape decisions around transformation and how we use our resources to help to keep people safe 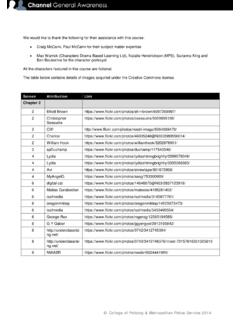 We would like to thank the following for their assistance with this course: • Craig McCann, Paul McCann for their subject matter expertise

What is GIS - Esri

What, Sire, What is gis 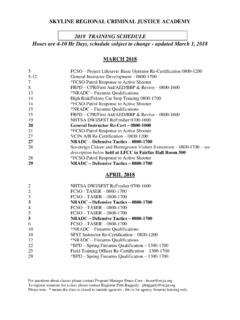