Safety Management and Safety Culture The Long, Hard and Winding Road1. Prof. Patrick Hudson Centre for Safety Research Leiden University The Netherlands Introduction Safety seems so easy just make sure people don't get hurt. In practice it is a lot harder to achieve a safe organisation that is capable of sustained safe performance in the face of significant hazards. This paper will examine the role of systematic Management systems in helping to ensure that organisations become safe and stay that way. The possession of a Management system, no matter how thorough and systematic it may be, is not, however, sufficient to guarantee sustained performance. What is also needed is an organisational Culture that supports the Management system and allows it to flourish. This paper discusses the notion of a Safety Culture and how it might be constructed. The bad news is that creating a Management system and keeping it alive is not a particularly easy task.

1 Safety Management and Safety Culture The Long, Hard and Winding Road1. Prof. Patrick Hudson Centre for Safety Research Leiden University The Netherlands Introduction Safety seems so easy just make sure people don't get hurt. In practice it is a lot harder to achieve a safe organisation that is capable of sustained safe performance in the face of significant hazards. This paper will examine the role of systematic Management systems in helping to ensure that organisations become safe and stay that way. The possession of a Management system, no matter how thorough and systematic it may be, is not, however, sufficient to guarantee sustained performance. What is also needed is an organisational Culture that supports the Management system and allows it to flourish. This paper discusses the notion of a Safety Culture and how it might be constructed. The bad news is that creating a Management system and keeping it alive is not a particularly easy task.

2 The good news is that it is worthwhile, both in terms of lives and in terms of profits. Finally the other good news is that it is not as hard as it may seem. This paper will examine briefly the history of systematic Safety Management systems and Safety cases, drawing on my personal experience of the petrochemical industry and Shell in particular. While I attempt a balanced view, my experience has been constrained to the Oil and Gas industry and, more recently, the commercial aviation environment. It will take the view that, while Safety Management has a long tradition, what has often been lacking was a systematic basis for Safety Management that allowed organisations to see if they had any gaps in their coverage. To proceed further it is necessary to develop organisational cultures that support processes beyond prescription, such as thinking the unthinkable' and being intrinsically motivated to be safe, even when there seems no obvious reason to.

3 The paper will examine the notion of Safety Cultures and High Reliability Organisations and put them in a context accessible to small and medium-sized businesses. Finally the paper concludes with a discussion of how to achieve such a Safety Culture and of the pitfalls that await the unwary. This will include a look at the regulatory environment that can encourage the development of systematic Safety Management and Safety cultures without burdening those organisations that are supposed to be being helped. The road to Safety may seem long and hard, and appear to wind, but the destination makes it well worthwhile. 1. This paper could not have been written without considerable help from my colleagues, Dianne Parker and Gerard van der Graaf, and the tireless assistance of Suzanne Croes and Matthew Lawrie in uncovering the details of Safety cultures. I also thank an anonymous referee for pointing out the importance of workforce involvement in any safe endeavour.

4 The History: From Flixborough to Piper Alpha The requirement for organisations to develop Safety Management Systems grew out of the aftermath of a number of disasters, predominantly in Europe. The Flixborough accident in 1974, when a whole village was blown away as a result of an explosion at Nypro Ltd's caprolactam production facility, let to the first requirement for petrochemical companies to present a Safety Case. The Control of Industrial Major Accident Hazards legislation (CIMAH) was restricted to UK onshore facilities. The Seveso incident in 1976 resulted in the European directive 82/501/EEC, known as the Seveso directive, which has been brought up to date with the Seveso II. guidelines as required by the Council Directive 96/82/EC. After the Piper Alpha disaster in 1987, Lord Cullen identified the requirement for systematic Safety Management , with the Safety Case proving that a Management system was in operation and was effective (1).

5 Cullen's requirements were consistent with the previous legislation and also developed the goal-setting approach first laid out in the report of the Robens Committee (2) that resulted in the UK Health and Safety at Work Act in 1974. Up to the mid-eighties the Oil and Gas business had been commonly regarded as a dangerous one in which hard men took risks, a stance still taken today in many industries such as mining and construction. Shell had started to progress past this point by first realising that Safety was important and that it was not just a matter of individual personal responsibility. Borrowing on the nearly two centuries of experience of the world industry leader, DuPont, Shell developed a set of eleven principles of Enhanced Safety Management ESM (3). These principles set out requirements, such as having a leadership committed to Safety , to having competent Safety advisors, to investigating accidents etc.

6 That should and did ensure considerably improved performance as measured in terms of injuries and fatalities (See Figure 4). The problem with ESM was that it was essentially an unstructured list of eminently reasonable things to do. None of the principles are wrong, Management commitment is as important as ever, but none of the principles show how one should act. Furthermore there is no guarantee that what is being done will actually work or, even, that more is done than is really necessary. In this environment regulation, both from without and within the organisation, was invariably prescriptive, defining what to do and how to do it. The prescriptions were defined top-down by those who knew best, and refined by experience from accidents. Typically hardware and procedural requirements could be traced back to specific accidents and over time the requirements tended to increase. Regulators forced companies to defend themselves and their employees in ways that were often contrary to common sense or even sound engineering practice.

7 The net result was paternalistic legislation and enforcement, and the ensuing responses, that can often be observed today. The Flixborough and Seveso disasters led to more stringent requirements, but essentially of the same top-down nature. Auditing processes involved checking that requirements were met, such as counting the number of fire extinguishers to ascertain whether there were as many as the law required. Auditing did not check, except indirectly, whether Safety was assured. The Piper Alpha disaster changed all that, at least for the Oil and Gas industry I am most familiar with. Lord Cullen proposed extending the goal-setting regime, which meant that society sets overall goals and organisations can find their own ways of meeting those goals. Such an approach was inherent in the Robens report (2) and also the Norwegian Petroleum Directorate's (NPD) legislative basis. The NPD's approach was influenced by the Ekofisk Bravo blow-out in 1977, that resulted in considerable pollution, and the Alexander L.

8 Kielland disaster in 1980 in which 123. lives were lost (4). Goal-setting placed control back to those who possessed' the hazards, allowing them to manage their own hazards in ways best suited to their capabilities. But Cullen also required that the Management of Safety be systematic, referring to the ISO 9000 and BS 5750 standards for general Management systems (1). Figure 1 shows such a Management system. Finally Cullen required that the concept of a Safety Case serve as a proof of assurance that the goals were being met by the Management system, be revived. Safety cases were originally required after Flixborough and Seveso, but fell into disrepute because such documents were usually still-born and only collected dust on bookshelves after they had been written. Cullen wanted the Safety Case to be a living document, providing assurance that Safety Management was active and serving as a basis for continuous safe operations.

9 Figure 1. A generic Safety Management System The elements of a Safety Management System (SMS). A number of important elements are specified that have to do with the setting of policy and creation of plans and organisational capacity to realise that policy (PLAN) , the analysis of hazards and effects leading to planning and implementation of those plans in order to manage the risks (DO) and the control on the effective performance of those steps (CHECK). A number of feedback loops are specificed to see where the information gained should be sent (FEEDBACK). Leadership and Commitment Policy and Strategic Objectives PLAN. Organisation, Responsibilities Resources, Standards & Documentation Hazards and Effects Management FEEDBACK. DO. Planning and Procedures Corrective Action Implementation Monitoring Audit Corrective Action and Improvement CHECK. Management Review Corrective Action And Improvement Shell's Approach to Developing Safety Management Systems and Safety Cases Multi-national Oil and Gas companies, forced by the legal requirements that spread quickly to many parts of the world, set to work to develop offshore Safety Management Systems (SMS).

10 The first fears were that SMS, like the previous Safety case regime, would create a vast amount of paperwork and prove to be very expensive to set up. Consultants probably fed this fear when they offered to take on the work and release the company's own staff back to productive work. Some companies decided to wait and see, given the length of time available before the Safety cases had to be presented. Others, especially Shell, decided that they would rather decide their own future rather than have it forced upon them. There was a degree of internal variation, given the freedom operating companies had within the Group. In the UK, where Cullen's requirements became law first, the feeling was that a SMS and associated Safety Case would have to be massively detailed to pass and allow operations to continue. The Corporate view was that the SMS had to be structured and systematic, and the Safety Case had to provide clear assurance, but they did not need to be overly large. 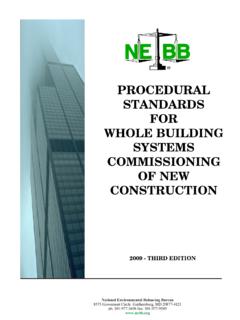 Handbook for Introduction of Food Traceability … 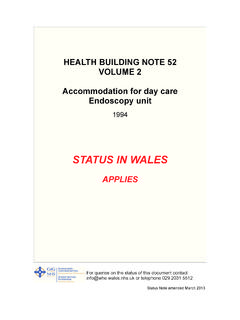 For queries on the status of this document contact info@whe.wales.nhs.uk or telephone 029 2031 5512 Status Note amended March 2013 HEALTH BUILDING NOTE 52

The Role of Citizens in Democratic Governance 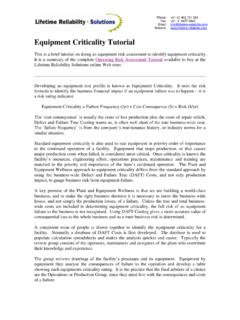 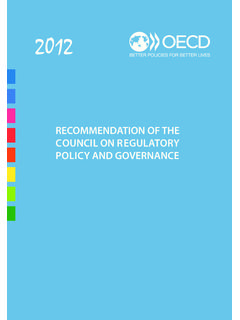 RECOMMENDATION OF THE COUNCIL ON …

3 RECOMMENDATION OF THE COUNCIL ON REGULATORY POLICY AND GOVERNANCE THE COUNCIL, HAVING REGARD to Articles 1, 2a), 3 and 5b) of the Convention on the Organisation for Economic 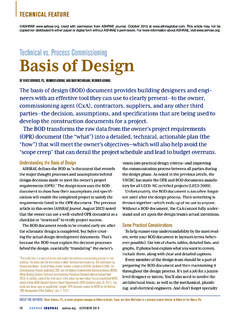 National Environmental Balancing Bureau 8575, PROCEDURAL STANDARDS FOR WHOLE BUILDING SYSTEMS, For Introduction of Food Traceability, For Introduction of Food Traceability Systems, Status, BUILDING, Of Citizens in Democratic Governance, Equipment Criticality Tutorial, RECOMMENDATION OF THE COUNCIL ON, RECOMMENDATION OF THE COUNCIL ON REGULATORY POLICY AND GOVERNANCE