Sermon #900 Metropolitan Tabernacle Pulpit 1. preach , preach , preach everywhere . NO. 900. A SERMON. DELIVERED BY C. H. SPURGEON, AT THE Metropolitan Tabernacle , NEWINGTON. And he said unto them, Go you into all the world, and preach the gospel to every creature. He that believes and is baptized shall be saved;. but he that believes not shall be damned.. Mark 16:15-16. BEFORE our Lord gave His disciples this commission, He addressed them in tones of serious rebuke. You will observe that appearing unto the eleven as they sat at meat, He upbraided them with their unbelief and hardness of heart because they believed not them which had seen him after he was risen.

1 Sermon #900 Metropolitan Tabernacle Pulpit 1. preach , preach , preach everywhere . NO. 900. A SERMON. DELIVERED BY C. H. SPURGEON, AT THE Metropolitan Tabernacle , NEWINGTON. And he said unto them, Go you into all the world, and preach the gospel to every creature. He that believes and is baptized shall be saved;. but he that believes not shall be damned.. Mark 16:15-16. BEFORE our Lord gave His disciples this commission, He addressed them in tones of serious rebuke. You will observe that appearing unto the eleven as they sat at meat, He upbraided them with their unbelief and hardness of heart because they believed not them which had seen him after he was risen.

2 So honorable an estimation did He set upon testimony, so marked a censure did He pronounce upon those who neglected it. The reprimand they received on such an occasion may well serve as a caution to us, for unbelief unfits the Christian for service. It is in proportion to our personal faith in the Gospel that we become competent witnesses for the teaching of it to others. Each one of us who would get credit for sincerity, must say with David, I. believed, therefore have I spoken, or else a want of faith of ourselves will effectually deprive our speech of all its power over our fellow men.

3 There can be little doubt that one reason why Christianity is not so aggressive now as it once was and exerts not everywhere the influence it had in apostolic times, is the feebleness of our faith in Christ as compared with the full assurance of faith exercised by the men of those days. In vain you hide a timid heart behind a modest face, when the attitude we should show, and the living force that should constrain us is a bold reliance upon the power of the holy Ghost, and a deep conviction of the might of the truth which we are taught to deliver. Brethren, if there is to be a revival of religion it must begin at home.

4 Our own souls must first of all be filled with holy faith and burning enthusiasm, and then shall we be strong to do exploits, and to win provinces for the scepter of King Jesus. Having thus made a note upon the context, I want you to refer to a parallel passage in Matthew. There we learn that in delivering this commission, our Lord assigned a remarkable reason for it, and one that intimately concerned Himself. All power, He said, is given unto ME in heaven, and in earth, go YOU therefore and teach all nations. These words were adapted to strengthen the faith of His disciples, of whom it had just been observed that some doubted.

5 Do you not see the point of this announcement? Jesus of Nazareth, being raised from the dead, tells His apostles that He is now invested with universal supremacy as the Son of Man. Therefore, He issues a decree of grace, calling on all people of every clime and kindred to believe the Gospel with a promise of personal salvation to each and every one that believes. With such authority is this mandate clothed, and so imperative the duty of all men everywhere to repent, that they who do not believe are threatened with a certain penalty of damnation. This royal ordinance He will have published throughout the whole world, but He enjoins it on all the messengers that those who bear the tidings should be thoroughly impressed with the sovereignty of Him that sends them.

6 Let the words then ring in your ears, Go you therefore. They sound like the music of that glad acclaim which hails the Redeemer installed with power, holding the insignia of power in His possession, exercising the full rights of legitimate power, and entrusting His disciples with a commission founded on that power, Go you into all the world.. Volume 15 1. 2 preach , preach , preach everywhere Sermon #900. Yet another remark before we proceed to the text. The commission we are about to deal with was the last which the Lord gave to His disciples before He was taken away from them. We prize greatly the last words of His departing servants, how shall we sufficiently value the parting words of our ascending Master?

7 Injunctions that are left us by those who have gone to glory have great weight upon our spirits. Let obedient lovers of Christ see to it that they act according to the last will and testament, the last desire expressed by their risen Lord. I claim for my text peculiar attention from every disciple of Jesus, not indeed as if it were a mournful entreaty, but rather as a solemn charge. You remember Christ's own parable, The kingdom of heaven is as a man traveling into a far country, who called his own servants, and delivered unto them his goods.. Look at this as the last direction which Jesus gives to His stewards before He went into a far country to receive for himself a kingdom and to return.

8 It seems to me that as when the mantle of Elijah fell upon Elisha, Elisha would have been much to blame if he had not caught it up, so when these words fell from our ascending Savior ere the clouds concealed Him from the disciples' sight, we ought to take them up with holy reverence. Since He has left them as His parting mantle they ought to be lovingly cherished and scrupulously obeyed. Come we, then, to invite your earnest heed to the command which the Savior here gives, Go you into all the world and preach the gospel to every creature. It was given to the apostles representatively. They represent the whole body of the faithful.

9 To every converted man and woman this commission is given. I grant you there is a specialty to those gifted and called to surrender themselves wholly to the work of the ministry, but their office in the visible church offers no excuse for the discharge of those functions that pertain to every member of the body of Christ in particular. It is the universal command of Christ to every believer, Go you into all the world and preach the gospel to every creature.. I. In thinking over this command, let us first consider WHAT IT IS THAT WE HAVE TO CARRY. TO EVERY CREATURE THE GOSPEL. There may be no need, my brethren, for me to tell you what the Gospel is, but to complete our subject we must declare it.

10 The Gospel, which is to be told to every creature, it seems to me, is the great truth that God was in Christ reconciling the world unto himself, not imputing their trespasses unto them. And that He has committed unto us the word of reconciliation.. God has looked in pity upon sinful man. He has sent His Son to take upon Himself the nature of man. His Son has come in the flesh. He has worked out a perfect righteousness by His obedient life. He has died upon the tree, the just for the unjust, that whosoever trusts in Him might be forgiven. Then come the Gospel's point and barb believe in Him and be baptized, and you shall be saved. 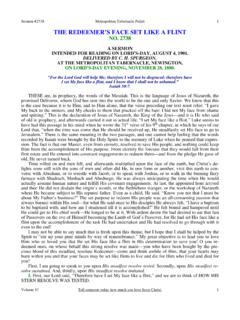 Sermon #2738 Metropolitan Tabernacle Pulpit 1 Volume 47 Tell someone today how much you love Jesus Christ. 1 THE REDEEMER’S FACE SET LIKE A FLINT

Sermon #2730 The Secret of love to God 3 Volume 47 Tell someone today how much you love Jesus Christ. 3 confessors’ cry, “We love Him!” 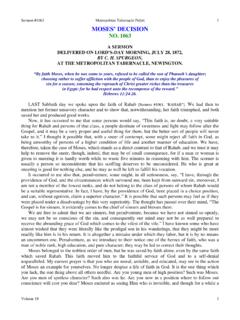 Sermon #1063 Metropolitan Tabernacle Pulpit Volume 18 Tell someone today how much you love Jesus Christ. 1 1 MOSES’ DECISION NO. 1063 A SERMON 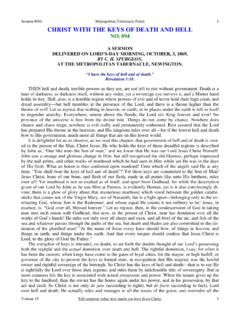 Sermon #894 Metropolitan Tabernacle Pulpit Volume 15 Tell someone today how much you love Jesus Christ. 1 1 CHRIST WITH THE KEYS OF DEATH AND HELL

With, Christ, Keys, Death, Hell, Christ with the keys of death and hell 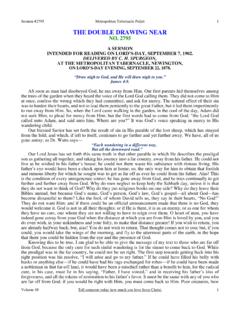 Sermon #2795 The Double Drawing Near 3 Volume 48 Tell someone today how much you love Jesus Christ. 3 near, “without money, and without price,” for the r oad is free to all who believe in Jesus. 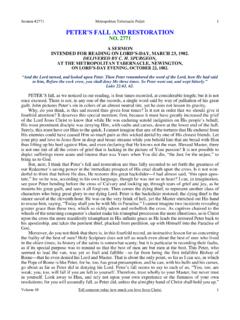 Sermon #2771 Peter’s Fall and Restoration 3 Volume 48 Tell someone today how much you love Jesus Christ. 3 The second time, he seems to have got up from where he sat by the fire; he was evidently not com- 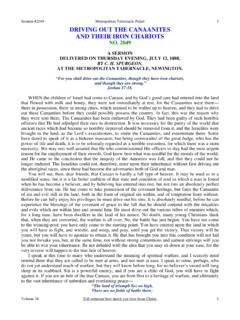 Driving Out the Canaanites and Their Iron Chariots Sermon #2049 Tell someone how much you love Jesus Christ. Volume 34 2 2 Lord, I would conquer till I die,

Their, Driving, Iron, Driving out the canaanites and their iron, Canaanites 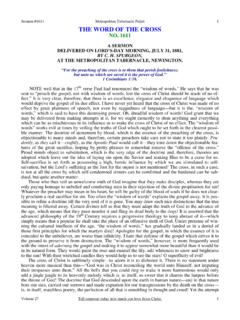 2 The Word of the Cross Sermon #1611 2 Tell someone today how much you love Jesus Christ. Volume 27 is made to decorate the gospel as though it needed something to commend it to the understanding and

Cross, Words, The word of the cross 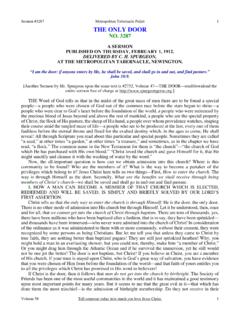 Sermon #3287 The Only Door 3 Volume 58 Tell someone today how much you love Jesus Christ. 3 Mark you, simple faith, where it is genuine, makes it plain that you do enter by Christ, the door,

Doors, Only, The only door 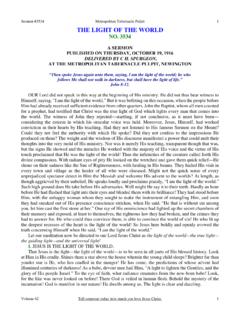 2 The Light of the World Sermon #3534 2 Tell someone today how much you love Jesus Christ. Volume 62 Well might the angels have, sung, “Glory to God in the highest; on earth peace, goodwill towards 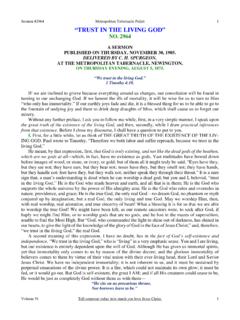 Sermon #2964 Metropolitan Tabernacle Pulpit 1 Volume 51 Tell someone today how much you love Jesus Christ. 1 “TRUST IN THE LIVING GOD” NO. 2964