October 2014 ICN2 2014/2. Second International Conference on Nutrition Rome, 19-21 November 2014. Conference Outcome Document: Rome Declaration on Nutrition Welcoming the participation of Heads of State and Government and other high-level guests, 1. We, Ministers and Representatives of the Members of the Food and Agriculture Organization of the United Nations (FAO) and the World Health Organization (WHO), assembled at the Second International Conference on Nutrition in Rome from 19 to 21 November 2014, jointly organized by FAO and WHO, to address the multiple challenges of malnutrition in all its forms and identify opportunities for tackling them in the next decades.

1 October 2014 ICN2 2014/2. Second International Conference on Nutrition Rome, 19-21 November 2014. Conference Outcome Document: Rome Declaration on Nutrition Welcoming the participation of Heads of State and Government and other high-level guests, 1. We, Ministers and Representatives of the Members of the Food and Agriculture Organization of the United Nations (FAO) and the World Health Organization (WHO), assembled at the Second International Conference on Nutrition in Rome from 19 to 21 November 2014, jointly organized by FAO and WHO, to address the multiple challenges of malnutrition in all its forms and identify opportunities for tackling them in the next decades.

2 2. Reaffirming the commitments made at the first International Conference on Nutrition in 1992, and the World Food Summits in 1996 and 2002 and the World Summit on Food Security in 2009, as well as in relevant International targets and action plans, including the WHO 2025 Global Nutrition Targets and the WHO Global Action Plan for the Prevention and Control of Noncommunicable Diseases 2013-2020. 3. Reaffirming the right of everyone to have access to safe, sufficient, and nutritious food, consistent with the right to adequate food and the fundamental right of everyone to be free from hunger consistent with the International Covenant on Economic, Social and Cultural Rights and other relevant United Nations instruments.

3 Multiple challenges of malnutrition to inclusive and sustainable development and to health 4. Acknowledge that malnutrition, in all its forms, including undernutrition, micronutrient deficiencies, overweight and obesity, not only affects people's health and wellbeing by impacting negatively on human physical and cognitive development, compromising the immune system, increasing susceptibility to communicable and noncommunicable diseases, restricting the attainment of human potential and reducing productivity, but also poses a high burden in the form of negative social and economic consequences to individuals, families, communities and States. 5. Recognize that the root causes of and factors leading to malnutrition are complex and multidimensional: a) poverty, underdevelopment and low socio-economic status are major contributors to malnutrition in both rural and urban areas.

4 This document can be accessed using the Quick Response Code on this page;. a FAO initiative to minimize its environmental impact and promote greener communications. Other documents can be consulted at 2 ICN2 2014/2. b) the lack of access at all times to sufficient food, which is adequate both in quantity and quality which conforms with the beliefs, culture, traditions, dietary habits and preferences of individuals in accordance with national and International laws and obligations;. c) malnutrition is often aggravated by poor infant and young child feeding and care practices, poor sanitation and hygiene, lack of access to education, quality health systems and safe drinking water, foodborne infections and parasitic infestations, ingestion of harmful levels of contaminants due to unsafe food from production to consumption.

5 D) epidemics, such as of the Ebola virus disease, pose tremendous challenges to food security and Nutrition . 6. Acknowledge that different forms of malnutrition co-exist within most countries; while dietary risk affects all socio-economic groups, large inequalities exist in nutritional status, exposure to risk and adequacy of dietary energy and nutrient intake, between and within countries. 7. Recognize that some socioeconomic and environmental changes can have an impact on dietary and physical activity patterns, leading to higher susceptibility to obesity and noncommunicable diseases through increasing sedentary lifestyles and consumption of food that is high in fat, especially saturated and trans-fats, sugars, and salt/sodium.

6 8. Recognize the need to address the impacts of climate change and other environmental factors on food security and Nutrition , in particular on the quantity, quality and diversity of food produced, taking appropriate action to tackle negative effects. 9. Recognize that conflict and post conflict situations, humanitarian emergencies and protracted crises, including, inter alia, droughts, floods and desertification as well as pandemics, hinder food security and Nutrition . 10. Acknowledge that current food systems are being increasingly challenged to provide adequate, safe, diversified and nutrient rich food for all that contribute to healthy diets due to, inter alia, constraints posed by resource scarcity and environmental degradation, as well as by unsustainable production and consumption patterns, food losses and waste, and unbalanced distribution.

7 11. Acknowledge that trade is a key element in achieving food security and Nutrition and that trade policies are to be conducive to fostering food security and Nutrition for all, through a fair and market- oriented world trade system, and reaffirm the need to refrain from unilateral measures not in accordance with International law, including the Charter of the United Nations, and which endanger food security and Nutrition , as stated in the 1996 Rome Declaration. 12. Note with profound concern that, notwithstanding significant achievements in many countries, recent decades have seen modest and uneven progress in reducing malnutrition and estimated figures show that: a) the prevalence of undernourishment has moderately declined, but absolute numbers remain unacceptably high with an estimated 805 million people suffering chronically from hunger in 2012-2014.

9 F) dietary risk factors, together with inadequate physical activity, account for almost 10% of the global burden of disease and disability. A common vision for global action to end all forms of malnutrition 13. We reaffirm that: a) the elimination of malnutrition in all its forms is an imperative for health, ethical, political, social and economic reasons, paying particular attention to the special needs of children, women, the elderly, persons with disabilities, other vulnerable groups as well as people in humanitarian emergencies;. b) Nutrition policies should promote a diversified, balanced and healthy diet at all stages of life. In particular, special attention should be given to the first 1,000 days, from the start of pregnancy to two years of age, pregnant and lactating women, women of reproductive age, and adolescent girls, by promoting and supporting adequate care and feeding practices, including exclusive breast feeding during the first six months, and continued breastfeeding until two years of age and beyond with appropriate complementary feeding.

10 Healthy diets should be fostered in preschools, schools, public institutions, at the workplace and at home, as well as healthy eating by families;. c) coordinated action among different actors, across all relevant sectors at International , regional, national and community levels, needs to be supported through cross-cutting and coherent policies, programmes and initiatives, including social protection, to address the multiple burdens of malnutrition and to promote sustainable food systems;. d) food should not be used as an instrument for political or economic pressure;. e) excessive volatility of prices of food and agricultural commodities can negatively impact food security and Nutrition , and needs to be better monitored and addressed for the challenges it poses.

A Review of Nutrition Policies - WHO 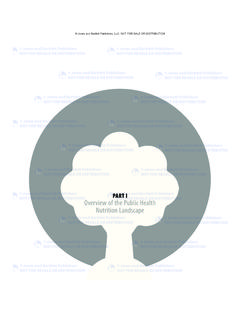 Part I Overview of the Public Health Nutrition …

6 Part I Overview of the Public Health Nutrition Landscape and focus. Establishing an overall effective community nutrition prac-tice involves correctly using and combining each part. Personal prevention involves people at the individual level; for instance, educating and supporting a breastfeeding mother to

Definitions of indicators for child anthropometry - …

Preface The Nutrition Landscape Information System (NLIS) was developed as part of the Landscape Analysis on Readiness to Accelerate Action in Nutrition. While many individual sources of publicly-available data exist, it …

Objectives • Discuss the hypermetabolism of the systemic inflammatory response and how it relates to nutrition and metabolic response. • Identify the uses of enteral nutrition to address nutritional and inflammatory issues. 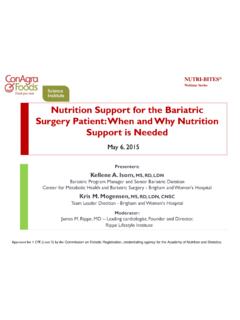 Nutrition Support in the Bariatric Patient: When and …

Outline the four types of bariatric surgery and the mechanisms by which they affect nutritional status. List indications for initiation of nutrition support therapy in the bariatric patient and determine appropriate mode of nutrition