EDITORIAL. SEX DIFFERENCES IN CHRONIC the National Health and Nutrition Examination Survey WIDESPREAD pain AND (NHANES-1) and from the National Health and Nutri- tion Examination Follow-Up Study (NHEFS), Magni et fibromyalgia : DO they EXIST al. (14) found that 57% of adults reporting CP were and why ? female. In a survey of 3605 adults in Scotland, Elliott et al. (16) demonstrated an odds ratio for CP of for CHRONIC musculoskeletal pain of unknown etiology and women (15). The odds ratio for CP among 1051 Hong fibromyalgia (FM) illustrate the pain discrepancy be- Kong adults was for women (16). Interestingly, CP. tween men and women and raise important questions as is more common in females even among children and to the reasons for this sex difference. adolescents (17, 18). CHRONIC pain (CP) and CHRONIC WIDESPREAD pain The sex DIFFERENCES for CWP and FM appear to be (CWP) are common in both developed and under- even greater than for CP.

EDITORIAL SEX DIFFERENCES IN CHRONIC WIDESPREAD PAIN AND FIBROMYALGIA: DO THEY EXIST AND WHY? Chronic musculoskeletal pain …

1 EDITORIAL. SEX DIFFERENCES IN CHRONIC the National Health and Nutrition Examination Survey WIDESPREAD pain AND (NHANES-1) and from the National Health and Nutri- tion Examination Follow-Up Study (NHEFS), Magni et fibromyalgia : DO they EXIST al. (14) found that 57% of adults reporting CP were and why ? female. In a survey of 3605 adults in Scotland, Elliott et al. (16) demonstrated an odds ratio for CP of for CHRONIC musculoskeletal pain of unknown etiology and women (15). The odds ratio for CP among 1051 Hong fibromyalgia (FM) illustrate the pain discrepancy be- Kong adults was for women (16). Interestingly, CP. tween men and women and raise important questions as is more common in females even among children and to the reasons for this sex difference. adolescents (17, 18). CHRONIC pain (CP) and CHRONIC WIDESPREAD pain The sex DIFFERENCES for CWP and FM appear to be (CWP) are common in both developed and under- even greater than for CP.

2 In a cross-sectional popula- developed countries (1). The same is true for fi- tion survey of 2210 adults in southern Israel, 14% of bromyalgia (2), which, by definition, is associated with women reported CWP compared to 3% of men (19). In CWP as well as other symptoms (3). FM also appears a survey of 1340 adults in Northern England, of to have a significant impact on society, directly in terms women reported CWP compared to of men (20). of health care costs and indirectly via loss of productiv- In Wichita, Kansas, women were four times more likely ity (4,5). to report CWP and threefold more likely to report fa- Initially felt to be a female disorder, at least one tigue and sleep disturbance (two other prominent symp- large general population study has found FM to occur in toms of FM). Women also were nine times more likely 1-2% of adult men (6).

3 To date, scant data exist to ex- to have tenderness at 11 or more FM tender points. The plain potential gender DIFFERENCES in the expression of overall prevalence of FM in Wichita was in FM. There is also a limited understanding with respect women and in men. In a general population sur- to the underlying causal mechanisms of FM, though vey of 3395 non-institutionalized adults in London, such mechanisms are felt to be largely multi-factorial Ontario, Canada, of women reported CWP versus (7). An improved understanding of sex DIFFERENCES in of men (21). Women were also more likely to the prevalence and expression of CWP and FM may report general and debilitating fatigue. The overall provide impetus for improved understanding of these prevalence of FM was found to be in women and causal mechanisms.

4 In men (6). In Finland, FM appears to be twice as In the outpatient subspecialty setting, a significant common among women (22). majority of patients reporting CWP and meeting the Interestingly, while FM clearly is more common in case definition for FM are female; the ratio of females women than men, in an examination of 86 women and to males among subspecialty clinic patients where FM 14 men, all meeting the published case definition for has been reported has been as high as 9 to 1 (8). How- FM and all recruited in a general population survey, ever, caution must be exercised when interpreting these there was little difference in the clinical severity or data because women utilize health care services to a range of symptoms between women and men (23). greater extent than men (9,10). More recently, several Why women are more likely to report CP and CWP.

5 General population studies have demonstrated that a and more likely to have FM is not known. There is greater proportion of women report pain , CP, and CWP evidence that women in general have a higher degree of (11). There have been a few exceptions. Male gender body tenderness than men. However, not all individuals may be a risk factor for CHRONIC back pain among with 11 or more FM tender points have pain (24). adults, as are advanced age and a variety of other dis- It appears that men and women differ in their per- ease- and occupation-related factors (12). Andersson et ception of pain . Riley et al. (25) reviewed DIFFERENCES al. (13) found no difference between the sexes in the in the perception of noxious stimuli and conducted a overall prevalence of CP, but did find that a greater meta-analysis of 17 studies on pain threshold and 9.

6 Percentage of women reported pain in the neck, shoul- studies on pain tolerance. Both pain threshold and pain der, forearm, hip and hand; men did not experience pain tolerance were significantly higher in men. This was to a greater extent than women in any location. true with the use of various nociceptive agents includ- However, the majority of general population studies ing mechanical pressure, electrical stimuli, and thermal have shown statistically significant sex DIFFERENCES in stimuli. These authors (25) pointed out that those stud- the prevalence of CP and CWP. Reviewing data from ies which failed to show such DIFFERENCES , do not have sufficient power. Unruh (26), in a review of the litera- Correspondence to: Kevin White, MD, PhD, FRCP(C), ture on the prevalence of CHRONIC and/or recurrent pain Division of Rheumatology, 268 Grosvenor St.

7 , London, conditions, found a higher female prevalence of mi- ON N6A 4V2, Canada graine, tension headaches, musculoskeletal pain , facial E-mail: pain , and abdominal pain . Paulson et al. (27) conducted an interesting study E-published: January 3, 2003 involving 10 young men and 10 young women. Ther- mal stimuli of 40 C and 50 C were applied to the sub- XX vs. XY Volume 1, Number 1, January 2003. XX vs. XY Volume 1, Number 1, January 2003 Editorials 6. jects and regional cerebral blood flow measured by However, women on HRT had a significantly lower positron emission tomography (PET). Both men and heat pain threshold and tolerance than women not on women rated the 50 C stimuli as painful, but women HRT and men. rated it as more intense than men; both groups showed a Responses to analgesia and anesthesia also vary be- bilateral activation of the premotor cortex as well as tween men and women.

8 Nalbuphine is an analgesic activation of a number of contralateral structures in- which acts predominantly at kappa-opiod receptors. It cluding the posterior insula, anterior cingulate cortex, was used in postoperative pain in men and women (37). and the cerebellar vermis during heat pain , but women Women showed a significantly greater analgesic re- had a significantly greater activation of the contralateral sponse than men; interestingly, men who received a prefrontal cortex when compared to males (27). Thus lower dose of the drug, experienced significantly both sexes showed similarities in brain activation pat- greater pain than those receiving placebo. terns but there were also neurophysiologic DIFFERENCES A group of healthy young men and women were demonstrated by the PET scan. subjected to painful continuous electrical stimulation of The role of ovarian hormones in modulating pain the ear lobe, and given ibuprofen as an analgesic.

9 Ibu- perception has been of considerable interest. In a meta- profen was significantly less effective in women than in analysis of pain perception across the menstrual cycle, men (38). Men and women, however, do not seem to Riley et al. (28) found that pressure stimulation, cold differ in their analgesic responses to placebo (37, 39). pressor pain , thermal heat stimulation, and ischemic It is not clear whether psychosocial factors differ in muscle pain gave rise to a clear pattern with the follicu- their effects on pain perception in men and women. It lar phase demonstrating higher thresholds for pain than has been suggested that anxiety may differentially af- later phases. Electrical stimulation was different from fect men and women perceiving and reporting pain other stimulus modalities showing the highest thresh- (40).

10 In a community study it was found that interfer- olds for the luteal phase. It should be noted that the ence of pain had a greater impact on the threat appraisal production of 17 beta estradiol, estrone, and estriol is of pain for women than for men (41). Thus, in addition lower in the follicular phase than in the luteal phase to neuropsychologic and neurohormonal effects, psy- (29). chosocial factors such as gender roles, pain -coping The role of estrogen and progesterone in modulating mechanisms, and social support likely also play an im- pain during pregnancy has also been of interest. There portant role in the way men and women perceive and is an elevated threshold to pain during pregnancy (30). react to pain (42). This seems to be mediated in part by an interaction be- We have begun to understand better the pathophysi- tween dynorphin and kappa opiate receptors (30). 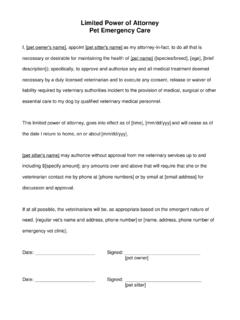 Limited Power of Attorney Pet Emergency Care I, [pet owner's name], appoint [pet sitter's name] as my attorney-in-fact, to do all that is necessary or desirable for maintaining the health of [pet name] ([species/breed], [age], [brief 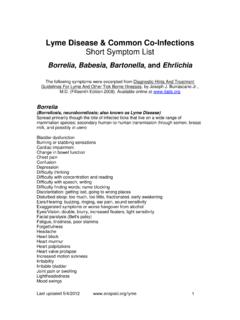 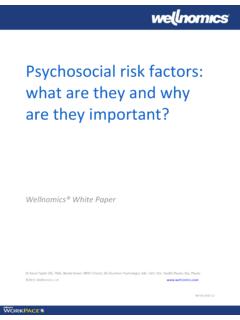 Psychosocial risk factors: what are they and why …

3 Introduction There are many factors contributing to musculoskeletal discomfort and disorders in the workplace. The risk factors that have been associated with musculoskeletal problems are physical (such as awkward or 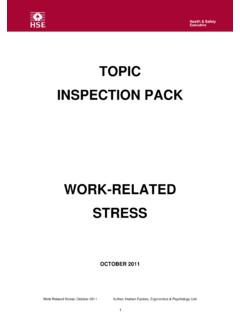 Increasingly, the term psychosocial risk factor is being used to describe those factors, which if not properly managed, can result in cases of work-related stress. 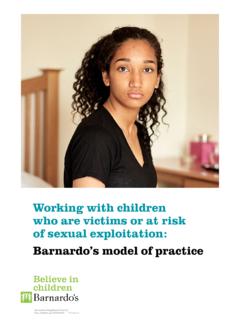 Working with children who are victims or at risk …

Working with children who are victims or at risk of sexual exploitation: Barnardo’s model of practice Barnardo’s Registered Charity Nos. 216250 and SC037605 17976az16

With, Risks, Working, Children, Victims, Working with children who are victims

Why Invest in Violence Prevention? This document was originally prepared under Grant Agreement #2517.02 for: Fetzer