5 1. Introduction EU Regulation 1257/2013 on ship Recycling is aimed at facilitating early ratification of the IMO. Hong Kong Convention (hereinafter referred to as HKC) on ship Recycling , both within the European Union and in third countries, by applying proportionate controls to ships and ship Recycling facilities on the basis of that Convention. The EU Regulation has implications for the superyacht sector since it requires yachts to record their Inventory of Hazardous Materials (IHM) which includes not only those that were present at the time of the build but also modifications made and equipment fitted during its subsequent life. Furthermore in addition to the IMO and EU Recycling legislation designers and builders need to be aware of their obligations under UN and EU waste policy. Because of the possible early date of application to new EU flagged ships, ICOMIA called for an industry wide meeting at METS on 19 November 2014 to discuss how to address the challenges of this Regulation.

6 It was agreed to start with a survey of organisations involved in survey and certification of the IHM and/or providing Services for preparing IHMs. SYBAss then offered to investigate IHM-related Services provided by Classification Societies. A draft SYBAss report of the IHM survey has been discussed by the Industry Working Group on 15 January in Antibes. The outcomes of that meeting are included in this revision of the report. Five Classification Societies have been contacted and the obtained information is summarized in this report. Additional information is given in the annexes to this report whilst also references to IHM related Class publications are listed. 2. IMO Hong Kong Convention on ship Recycling The EU Regulation 1257/2013 on ship Recycling is to a large extent based on the IMO Hong Kong Convention (HKC) on ship Recycling and contains various references to the HKC and related Guidelines.

7 For readers who are not familiar with the HKC a short Summary of requirements is given in this chapter. The information is extracted from Resolution (62) HKC 2011 Guidelines Development ship IHM (see section ). These comprehensive IMO Guidelines and/or derived Guidelines by Classification Societies (see Annexes) should be consulted for more details. This report focusses on the mandatory Inventory of Hazardous Materials (IHM). The objectives of the IHM are to provide ship -specific information on the actual hazardous materials present on board in order to protect health and safety of the crew, and to protect health and safety of workers at ship Recycling facilities and avoid environmental pollution when the ship is going for Recycling . The IHM consists of three parts: Part I: Materials contained in ship structure or equipment.

10 The following procedure should be followed: 1. Collection of necessary information;. 2. Assessment of collected information;. 3. Preparation of Visual/Sampling Check Plan;. 4. Onboard Visual/Sampling Check; and 5. Preparation of Part I of the IHM and related documentation. Maintaining and updating Part I of the IHM during operations The HKC requires that the shipowner maintains the IHM, throughout the life of the ship . If any machinery or equipment is added, removed or replaced or the hull coating is renewed, Part I of the IHM should be updated according to the requirements for new ships. Updating is not required if identical parts or coatings are installed or applied. Part I of the IHM should belong to the ship and the continuity and conformity of the information should be confirmed, especially if the flag, owner or operator of the ship changes. 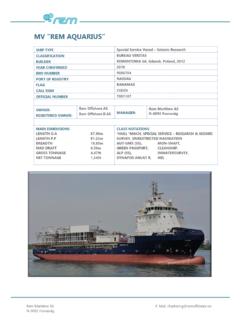 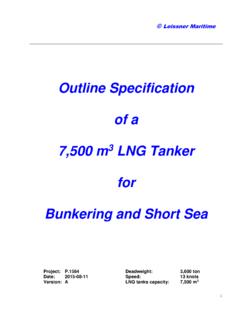 Green Passport: A Ship Owner’s, SHIP, HOUSEHOLD GOODS AND PERSONAL EFFECTS, Outline Specification of a, Tanker for Bunkering and Short