2 We also show through visualization how water 1. Input 2. Convolutional 3. RNN with attention 4. Word by the model is able to automatically learn to fix its Image Feature Extraction over the Image word generation gaze on salient objects while generating the cor- responding words in the output sequence. We validate the use of attention with state-of-the- art performance on three benchmark datasets: Yet despite the difficult nature of this task, there has been Flickr9k, Flickr30k and MS COCO. a recent surge of research interest in attacking the Image caption generation problem. Aided by advances in train- ing deep Neural networks (Krizhevsky et al., 2012) and the availability of large classification datasets (Russakovsky 1. Introduction et al., 2014), recent work has significantly improved the Automatically generating captions for an Image is a task quality of caption generation using a combination of convo- close to the heart of scene understanding one of the pri- lutional Neural networks (convnets) to obtain vectorial rep- mary goals of computer vision.

3 Not only must caption gen- resentation of images and recurrent Neural networks to de- eration models be able to solve the computer vision chal- code those representations into natural language sentences lenges of determining what objects are in an Image , but (see Sec. 2). One of the most curious facets of the hu- they must also be powerful enough to capture and express man visual system is the presence of attention (Rensink, their relationships in natural language. For this reason, cap- 2000; Corbetta & Shulman, 2002). Rather than compress tion generation has long been seen as a difficult problem. an entire Image into a static representation, attention allows It amounts to mimicking the remarkable human ability to for salient features to dynamically come to the forefront as compress huge amounts of salient visual information into needed. This is especially important when there is a lot descriptive language and is thus an important challenge for of clutter in an Image .

4 Using representations (such as those machine learning and AI research. from the very top layer of a convnet) that distill information in Image down to the most salient objects is one effective Proceedings of the 32 nd International Conference on Machine solution that has been widely adopted in previous work. Learning, Lille, France, 2015. JMLR: W&CP volume 37. Copy- Unfortunately, this has one potential drawback of losing right 2015 by the author(s). information which could be useful for richer, more descrip- Neural Image caption generation with Visual Attention tive captions. Using lower-level representation can help low for a natural way of doing both ranking and genera- preserve this information. However working with these tion. Mao et al. (2014) used a similar approach to genera- features necessitates a powerful mechanism to steer the tion but replaced a feedforward Neural language model with model to information important to the task at hand, and we a recurrent one.

5 Both Vinyals et al. (2014) and Donahue show how learning to Attend at different locations in order et al. (2014) used recurrent Neural networks (RNN) based to generate a caption can achieve that. We present two vari- on long short-term memory (LSTM) units (Hochreiter &. ants: a hard stochastic attention mechanism and a soft Schmidhuber, 1997) for their models. Unlike Kiros et al. deterministic attention mechanism. We also show how (2014a) and Mao et al. (2014) whose models see the im- one advantage of including attention is the insight gained age at each time step of the output word sequence, Vinyals by approximately visualizing what the model sees . En- et al. (2014) only showed the Image to the RNN at the be- couraged by recent advances in caption generation and in- ginning. Along with images, Donahue et al. (2014) and spired by recent successes in employing attention in ma- Yao et al. (2015) also applied LSTMs to videos, allowing chine translation (Bahdanau et al.)

6 , 2014) and object recog- their model to generate video descriptions. nition (Ba et al., 2014; Mnih et al., 2014), we investigate Most of these works represent images as a single feature models that can Attend to salient part of an Image while vector from the top layer of a pre-trained convolutional net- generating its caption . work. Karpathy & Li (2014) instead proposed to learn a The contributions of this paper are the following: joint embedding space for ranking and generation whose model learns to score sentence and Image similarity as a We introduce two attention-based Image caption gen- function of R-CNN object detections with outputs of a bidi- erators under a common framework (Sec. ): 1) a rectional RNN. Fang et al. (2014) proposed a three-step soft deterministic attention mechanism trainable by pipeline for generation by incorporating object detections. standard back-propagation methods and 2) a hard.

7 Their models first learn detectors for several visual con- stochastic attention mechanism trainable by maximiz- cepts based on a multi-instance learning framework. A lan- ing an approximate variational lower bound or equiv- guage model trained on captions was then applied to the alently by REINFORCE (Williams, 1992). detector outputs, followed by rescoring from a joint Image - We show how we can gain insight and interpret the text embedding space. Unlike these models, our proposed results of this framework by visualizing where and attention framework does not explicitly use object detec- what the attention focused on (see Sec. ) tors but instead learns latent alignments from scratch. This Finally, we quantitatively validate the usefulness of allows our model to go beyond objectness and learn to attention in caption generation with state-of-the-art Attend to abstract concepts. performance (Sec.)

8 On three benchmark datasets: Prior to the use of Neural networks for generating captions, Flickr8k (Hodosh et al., 2013), Flickr30k (Young two main approaches were dominant. The first involved et al., 2014) and the MS COCO dataset (Lin et al., generating caption templates which were filled in based 2014). on the results of object detections and attribute discovery (Kulkarni et al. (2013), Li et al. (2011), Yang et al. (2011), 2. Related Work Mitchell et al. (2012), Elliott & Keller (2013)). The second approach was based on first retrieving similar captioned im- In this section we provide relevant background on previ- ages from a large database then modifying these retrieved ous work on Image caption generation and attention. Re- captions to fit the query (Kuznetsova et al., 2012; 2014). cently, several methods have been proposed for generat- These approaches typically involved an intermediate gen- ing Image descriptions.

9 Many of these methods are based eralization step to remove the specifics of a caption that on recurrent Neural networks and inspired by the success- are only relevant to the retrieved Image , such as the name ful use of sequence-to-sequence training with Neural net- of a city. Both of these approaches have since fallen out of works for machine translation (Cho et al., 2014; Bahdanau favour to the now dominant Neural network methods. et al., 2014; Sutskever et al., 2014; Kalchbrenner & Blun- som, 2013). The encoder-decoder framework (Cho et al., There has been a long line of previous work incorporating 2014) of machine translation is well suited, because it is the idea of attention into Neural networks. Some that share analogous to translating an Image to a sentence. the same spirit as our work include Larochelle & Hinton (2010); Denil et al. (2012); Tang et al. (2014) and more The first approach to using Neural networks for caption gen- recently Gregor et al.

10 (2015). In particular however, our eration was proposed by Kiros et al. (2014a) who used a work directly extends the work of Bahdanau et al. (2014);. multimodal log-bilinear model that was biased by features Mnih et al. (2014); Ba et al. (2014); Graves (2013). from the Image . This work was later followed by Kiros et al. (2014b) whose method was designed to explicitly al- Neural Image caption generation with Visual Attention 3. Image caption generation with Attention Figure 2. A LSTM cell, lines with bolded squares imply projec- Mechanism tions with a learnt weight vector. Each cell learns how to weigh its input components (input gate), while learning how to modulate Model Details that contribution to the memory (input modulator). It also learns In this section, we describe the two variants of our weights which erase the memory cell (forget gate), and weights attention-based model by first describing their common which control how this memory should be emitted (output gate). 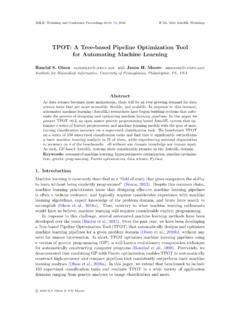 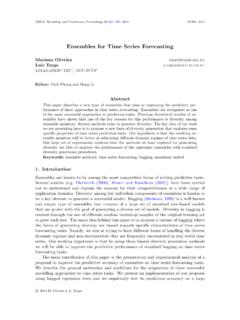 Ensembles for Time Series Forecasting set of real world time series. Our results clearly indicate that this is a promising research direction. In Section2we provide a brief description of the tasks being tackled in this paper.