Preprint typeset in JHEP style - HYPER VERSION Lent Term, 2017. Solid State Physics University of Cambridge Part II Mathematical Tripos David Tong Department of Applied Mathematics and Theoretical Physics , Centre for Mathematical Sciences, Wilberforce Road, Cambridge, CB3 OBA, UK. 1 . Recommended Books and Resources There are many excellent books on Solid State Physics . The two canonical books are Ashcroft and Mermin, Solid State Physics Kittel, Introduction to Solid State Physics Both of these go substantially beyond the material covered in this course. Personally, I have a slight preference for the verbosity of Ashcroft and Mermin. A somewhat friendlier, easier going book is Steve Simon, Solid State Physics Basics It covers only the basics, but does so very well. (An earlier draft can be downloaded from Steve Simon's homepage; see below for a link.). A number of lecture notes are available on the web. Links can be found on the course webpage: Contents 0.

1 Preprint typeset in JHEP style - HYPER VERSION Lent Term, 2017. Solid State Physics University of Cambridge Part II Mathematical Tripos David Tong Department of Applied Mathematics and Theoretical Physics , Centre for Mathematical Sciences, Wilberforce Road, Cambridge, CB3 OBA, UK. 1 . Recommended Books and Resources There are many excellent books on Solid State Physics . The two canonical books are Ashcroft and Mermin, Solid State Physics Kittel, Introduction to Solid State Physics Both of these go substantially beyond the material covered in this course. Personally, I have a slight preference for the verbosity of Ashcroft and Mermin. A somewhat friendlier, easier going book is Steve Simon, Solid State Physics Basics It covers only the basics, but does so very well. (An earlier draft can be downloaded from Steve Simon's homepage; see below for a link.). A number of lecture notes are available on the web. Links can be found on the course webpage: Contents 0.

3 The Bragg Condition 75. The Structure Factor 76. The Debye-Waller Factor 78. 3. Electron Dynamics in Solids 80. Fermi Surfaces 80. Metals vs Insulators 81. The Discovery of Band Structure 86. Graphene 87. Dynamics of Bloch Electrons 91. Velocity 92. The Effective Mass 94. Semi-Classical Equation of Motion 95. Holes 97. Drude Model Again 99. Bloch Electrons in a Magnetic Field 101. Semi-Classical Motion 101. Cyclotron Frequency 103. Onsager-Bohr-Sommerfeld Quantisation 104. quantum Oscillations 106. 4. Phonons 109. Lattices in One Dimension 109. A Monotonic Chain 109. A Diatomic Chain 111. Peierls Transition 113. quantum Vibrations 116. The Mo ssbauer Effect 120. From Atoms to Fields 123. Phonons in Three Dimensions 123. From Fields to Phonons 125. 2 . Acknowledgements This material is taught as part of the Applications in quantum Mechanics course of the Cambridge mathematical tripos. 3 . 0. Introduction Solid State Physics is the study of stuff , of how the wonderfully diverse properties of solids can emerge from the simple laws that govern electrons and atoms.

4 There is one, over-riding, practical reason for wanting to understand the behaviour of stuff: this is how we build things. In particular, it is how we build the delicate and powerful technologies that underlie our society. Important though they are, such practicalities will take a back seat in our story. Instead, our mantra is knowledge for its own sake . Indeed, the subject of Solid State Physics turns out to be one of extraordinary subtlety and beauty. If such knowledge ultimately proves useful, this is merely a happy corollary. We will develop only the basics of Solid State Physics . We will learn how electrons glide through seemingly impenetrable solids, how their collective motion is described by a Fermi surface, and how the vibrations of the underlying atoms get tied into bundles of energy known as phonons. We will learn that electrons in magnetic fields can do strange things and start to explore some of the roles that geometry and topology play in quantum Physics .

5 One of the ultimate surprises of Solid State Physics is how the subject later dovetails with ideas from particle Physics . At first glance, one might have thought these two disciplines should have nothing to do with each other. Yet one of the most striking themes in modern Physics is how ideas from one have influenced the other. In large part this is because both subjects rest on some of the deepest principles in Physics : ideas such symmetry, topology and universality. Although much of what we cover in these lectures will be at a basic level, we will nonetheless see some hints of these deeper connections. We will, for example, see the Dirac equation originally introduced to unify relativity and quantum mechanics emerging from graphene. We will learn how the vibrations of a lattice, and the resulting phonons, provide a baby introduction to quantum field theory. 1 . 1. Particles in a Magnetic Field The purpose of this chapter is to understand how quantum particles react to magnetic fields.

6 In contrast to later sections, we will not yet place these particles inside solids, for the simple reason that there is plenty of interesting behaviour to discover before we do this. Later, in Section , we will understand how these magnetic fields affect the electrons in solids. Before we get to describe quantum effects, we first need to highlight a few of the more subtle aspects that arise when discussing classical Physics in the presence of a magnetic field. Gauge Fields Recall from our lectures on Electromagnetism that the electric field E(x, t) and mag- netic field B(x, t) can be written in terms a scalar potential (x, t) and a vector potential A(x, t), A. E = and B = A ( ). t Both and A are referred to as gauge fields. When we first learn electromagnetism, they are introduced merely as handy tricks to help solve the Maxwell equations. However, as we proceed through theoretical Physics , we learn that they play a more fundamental role. In particular, they are necessary if we want to discuss a Lagrangian or Hamiltonian approach to electromagnetism.

7 We will soon see that these gauge fields are quite indispensable in quantum mechanics. The Lagrangian for a particle of charge q and mass m moving in a background electromagnetic fields is 1. L = mx 2 + q x A q ( ). 2. The classical equation of motion arising from this Lagrangian is mx = q (E + x B). This is the Lorentz force law. Before we proceed I should warn you of a minus sign issue. We will work with a general charge q. However, many textbooks work with the charge of the electron, written as q = e. If this minus sign leans to confusion, you should blame Benjamin Franklin. 2 . An Example: Motion in a Constant Magnetic Field We'll take a constant magnetic field, pointing in the z-direction: B = (0, 0, B). We'll take E = 0. The particle is free in the z-direction, with the equation of motion mz = 0. The more interesting dynamics takes place in the (x, y)-plane where the equations of motion are mx = qB y and my = qB x ( ). which has general solution is x(t) = X + R sin( B (t t0 )) and y(t) = Y + R cos( B (t t0 )).

8 We see that the particle moves in a circle which, for B > 0 B. and q > 0, is in a clockwise direction. The cyclotron frequency is defined by qB. B = ( ). m Figure 1: The centre of the circle (X, Y ), the radius of the circle R. and the phase t0 are all arbitrary. These are the four integration constants expected in the solution of two, second order differential equations. The Hamiltonian The canonical momentum in the presence of gauge fields is L. p= = mx + qA ( ). x . This clearly is not the same as what we naively call momentum, namely mx . The Hamiltonian is given by 1. H = x p L = (p qA)2 + q . 2m Written in terms of the velocity of the particle, the Hamiltonian looks the same as it would in the absence of a magnetic field: H = 21 mx 2 + q . This is the statement that a magnetic field does no work and so doesn't change the energy of the system. However, there's more to the Hamiltonian framework than just the value of H. We need to remember which variables are canonical.

9 This information is encoded in the Poisson bracket structure of the theory (or, in fancy language, the symplectic structure on phase space). The fact that x and p are canonical means that {xi , pj } = ij with {xi , xj } = {pi , pj } = 0. 3 . In the quantum theory, this structure transferred onto commutation relations between operators, which become [xi , pj ] = i~ ij with [xi , xj ] = [pi , pj ] = 0. Gauge Transformations The gauge fields A and are not unique. We can change them as . and A A + ( ). t for any function (x, t). Under these transformations, the electric and magnetic fields ( ) remain unchanged. The Lagrangian ( ) changes by a total derivative, but this is sufficient to ensure that the resulting equations of motion ( ) are unchanged. Different choices of are said to be different choices of gauge. We'll see some examples below. The existence of gauge transformations is a redundancy in our description of the system: fields which differ by the transformation ( ) describe physically identical configurations.

10 Nothing that we can physically measure can depend on our choice of gauge. This, it turns out, is a beautifully subtle and powerful restriction. We will start to explore some of these subtleties in Sections and The canonical momentum p defined in ( ) is not gauge invariant: it transforms as p p + q . This means that the numerical value of p can't have any physical meaning since it depends on our choice of gauge. In contrast, the velocity of the particle x is gauge invariant, and therefore physical. The Schro dinger Equation Finally, we can turn to the quantum theory. We'll look at the spectrum in the next section, but first we wish to understand how gauge transformations work. Following the usual quantisation procedure, we replace the canonical momentum with p 7 i~ . The time-dependent Schro dinger equation for a particle in an electric and magnetic field then takes the form 1 2. i~ = H = i~ qA + q ( ). t 2m The shift of the kinetic term to incorporate the vector potential A is sometimes referred to as minimal coupling. 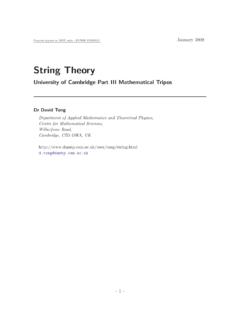 String theory is a theory of quantum gravity String theory uni es Einstein’s theory of general relativity with quantum mechanics. Moreover, it does so in a manner … 3. Quantum Gases In this section we will discuss situations where quantum eﬀects are important. ... is the density of states: g(E)dEcounts the number of states with energy between E ... There is nothing particularly quantum mechanical about the density of states. In-deed, in the derivation above we have replaced the quantum sum with an ... At the atomic scale, electromagnetism (admittedly in conjunction with some basic quantum e ects) governs the interactions between atoms and molecules. It is the force that underlies the periodic table of elements, giving rise to all of chemistry and, through this, much of biology. It is the force which binds atoms together into solids and liquids. 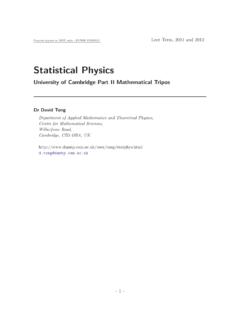 Contents 1. The Fundamentals of Statistical Mechanics 1 1.1 Introduction 1 1.2 The Microcanonical Ensemble 2 1.2.1 Entropy and the Second Law of Thermodynamics 5

Recommended Books and Resources M. Peskin and D. Schroeder, An Introduction to Quantum Field Theory This is a very clear and comprehensive book, covering everything in this course at the 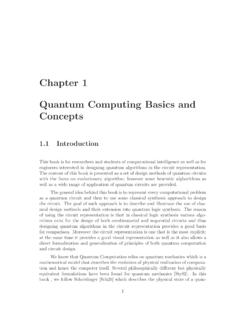 4 CHAPTER 1. QUANTUM COMPUTING BASICS AND CONCEPTS quantum mechanical theory and Section 1.5 presents the transition from quantum mechanics to quantum logic circuits and quantum computation. 1.3 Mathematical Preliminaries to Quantum Com-puting According to [Dir84] each physical system is associated with a separate Hilbert space H. 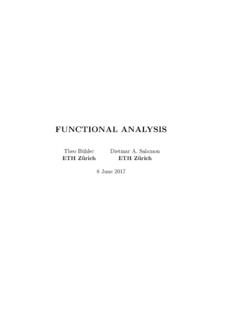 The material of Subsection 1.3.3 on elementary Hilbert space theory, Sub-section 5.4.2 on the Stone{Weierstraˇ Theorem, and the appendices on the ... quantum mechanics, probability theory, geo-metric group theory, dynamical systems, ergodic theory, and approximation theory, among many others. While we say little about speci c applications ...