around 12.5 percent to South Africa’s gross domestic product (GDP), is an important driver in the country’s economy, in addition to having one of the highest business success rates.

2 Billion) in sales. The sector recorded a positive and slight growth performance than eight percent over the previous year, despite tough challenging economic environment. Sales in the South African Retail Sector 2015 2016 Sales 2010-2015 2015-2020. Sales (US$ bn) Annual Annual Growth Rate (US$ (Estimate) Growth Rate (Forecast %). bn) (%). Convenience Stores $ $ Discounters $ $ Hypermarkets $ $ Supermarkets $ $ Traditional Grocery $ $ Retailers Independent Small $ $ Grocers Grocery Retailers $ $ Source: Euromonitor International To remain competitive, most retailers from across all retailing channels operating within South Africa had to diversify their portfolios, and adopted various multichannel approach and strategies and expanded product lines; and launched online stores to supplement their store-based retailing sales which led to growth in online channel of shopping. The rising internet penetration and number of consumers that have internet access and realize its convenience coupled with better delivery services has increased online shopping to capitalize on the prevailing trends.

3 However, online food shopping is currently not doing well as expected. Local retailers are aggressively expanding with solid growing footprints into other African countries giving United States' companies that do business with South African retailers a gateway to the rest of Sub-Saharan Africa . Most South African retailers have entered the Sub-Saharan Africa market successfully, exceeding projections and expectations of income. An example is South Africa 's biggest retailer, Shoprite, which has opened stores in fifteen other African countries along with expanding its Retail space locally. Retail Food Sector Opportunities and Challenges Opportunities Challenges South Africa represents a gateway to Limited technical capacity and political will on the part business in the Sub-Saharan Africa region, of South African regulators contribute to trade barriers providing access to neighboring country and delays in resolving technical issues.

4 Markets. The South African middle class continues Local products are preferred over imported goods on a to grow and has an increasing appetite for perception that imports harm the local economy and high value consumer goods. jobs. Consumers place an increasingly high European products are regarded as high quality and have value on choice, and products are greater market access due to the Trade, Development regarded as adding variety to the Retail and Cooperation Agreement (TDCA) and the South landscape. Africa -EU Free Trade Agreement. Some parts of the South African Protectionist policies on livestock products continue to government and industry are interested in undermine the bilateral trade relationship. strengthening the Africa trade relationship. South Africa importers and distributors Lower-income consumers do not exhibit brand loyalty. actively market brand name consumer Consumers in general are price-conscious so product goods, including products.

5 Promotion must be ongoing. A growing young population which tends Differences in consumer classes and regions are distinct. to prefer processed, easily-available Foods and are active users of the internet and mobile devices. Section II: Road Map for Market Entry Entry Strategy The South African Retail market could be very sophisticated and complex. In South Africa 's very competitive marketplace it is essential that exporters choose the correct agent or distributor. Exporting through agents or representatives would give a new-to-market entry advantages and is the safest way to enter the South African Retail food market. In addition to their role as local representatives of exporters, agents should be able to handle the necessary customs clearance, regulatory requirements, port and rail charges, documentation, warehousing, and financing arrangements. The agent or representatives are also fully liable under the South African Import Control Law for all regulations and control imposed on imported products.

6 Agents are required to register with the Director of Import and Export Control of the Department of Trade and Industry. Evidence shows that the most successful company ventures are those that have researched their market thoroughly before engaging in a search for agents and distributors. Once contacts are established, it is advisable to visit the country, since firsthand knowledge of the market is highly useful. It is important for a exporter to maintain close contact with the local agent to track changes in importing procedures and to ensure that the agent is effectively representing the sales interest of the exporter. Distributors buy and hold stock of products, and can be granted exclusive rights to sell the product in a particular area or to a particular type of customer. An agreement with a distributor is similar to an agreement with an agent, except that the price and delivery terms will differ because the distributor is the principal.

8 Depending on the size of the supermarket chain, imports can be handled by the head office, their importer or by branches themselves. This structure for big supermarkets allows exporters to make agreements of trade directly with the buyers of Retail stores at the head office level, who will turn to their importers to purchase the products on their behalf for direct distribution to the consumer. This is a trend in the distribution channel, where supermarkets are moving towards outsourcing the services of importation, warehousing and transportation. The small supermarkets on the other hand, do not import directly but source imported products directly from the importers. Another strategy in the South African market is through franchising which also provides a good market entry. According to the Franchise Association of South Africa (FASA), there are 625 franchised systems, over 39,000 franchise outlets and 17 franchise business sectors.

9 Franchise sector contributes around percent to South Africa 's gross domestic product (GDP), is an important driver in the country's economy, in addition to having one of the highest business success rates. Food franchises make up about 25 percent of total franchises, with some segments that are considered saturated such as pizza and burgers. Several , brands have made their entry in the last few years, namely Burger King, Pizza Hut, Krispy Kreme, Domino's and most recently, Starbucks. The following are some of South Africa Organized Agriculture structures that might be of interest to note: The Consumer Goods Council of South Arica (CGCSA) - The Agricultural Business Chamber (ABC) The Association of Meat Importers and Exporters of SA (AMIESA) Animal Feed Manufactures Association (AFMA) Wines of South Africa (WOSA) Super Stores, Supermarkets, Hyper Markets or Super Centers, Club and Warehouse Outlets The South African Retail food sector is sophisticated and developed relative to other markets on the African continent. 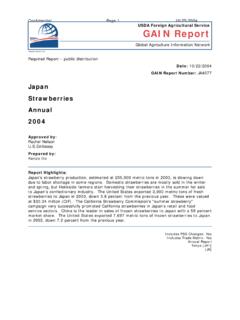 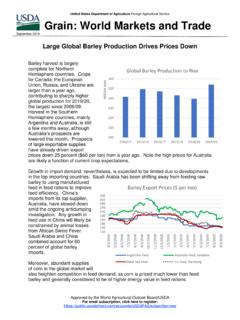 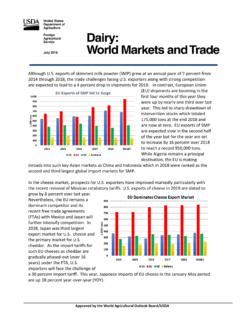 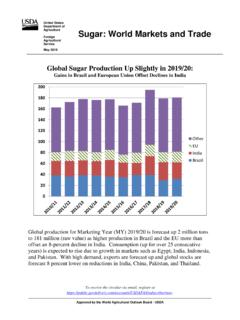 Page 2 2019/20 Sugar Overview . U.S. production is forecast up 2 percent to 8.3 million tons due to expected reduced early-season harvested area that pushes a large proportion of crop-year production into the 2019/20 marketing year. Imports are 13 percent higher at 2.9 million tons based on projected quota programs and 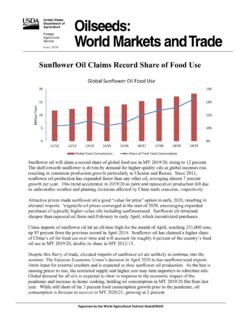 Brazil Soybean Premiums Are an Effective Barometer For U.S ... 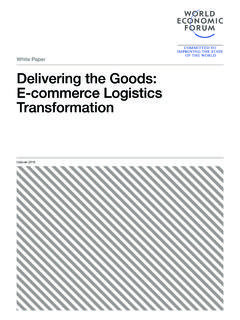 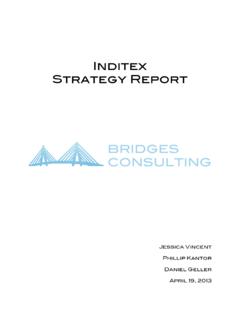 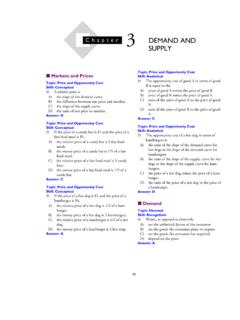 96 CHAPTER 3 Topic: Change in Demand, Prices of Related Goods Skill: Recognition 24) A complement is a good A) of lower quality than another good. B) used in conjunction with another good. 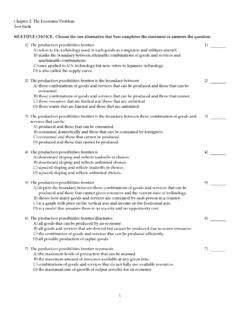 Chapter 2 The Economic Problem Test Bank MULTIPLE CHOICE. Choose the one alternative that best completes the statement or answers the question. 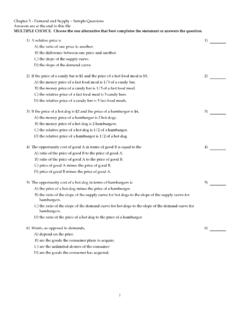 Chapter 3 - Demand and Supply - Sample Questions Answers are at the end fo this file MULTIPLE CHOICE. Choose the one alternative that best completes the statement or answers the question.

8 Journal of International Business Research and Marketing enough to immerse the observer in an experience, and people are rejecting the idea of passive on looking.