2 Ultrasound this paper is to Report on a rare case of Spontaneous calf showed a well localized swelling within the posterior hematoma and its diagnosis and management. compartment of the left calf . This was confirmed by magnetic resonance imaging (MRI) with gadolinium contrast. The KEY WORDS: radiologist reported it as a large hematoma on the medial aspect of the left calf . It was located within the muscular calf ; hematoma; Spontaneous ; tenderness bundle of the medial head of gastrocnemius muscle, compressing and displacing the underlying muscle bundle INTRODUCTION. but no extension into muscle fibers. No obvious vascular abnormality or malformation were noted in the MRI of left haematoma is a collection of blood that is confined to an lower limb. organ, tissue or space, and is caused by a break in a blood vessel. haematoma usually occurs after a traumatic event, The patient underwent evacuation of the haematoma under surgery or from a pre-existing vascular defect.

3 However, the general anaesthesia. Longitudinal incision was made over findings of unilateral calf swelling and a palpable soft tissue the point of maximal swelling and organised clots were noted mass on physical examination in a patient without a history beneath the deep fascia, indenting the gastrocnemius of trauma can be challenging. The differential diagnosis muscle. The clots were evacuated completely and no bleeders includes deep vein thrombosis (DVT), haematoma , ruptured were seen. The wound was closed with subcutaneous and popliteal cyst, infection, sarcoma, intramuscular subcuticular sutures over a vacuum suction drainage. The haemagioma and lymphoedema. Accurate diagnosis is patient was discharged well after three days and on review essential as the treatment and prognosis of each differ two months later, the wound has healed well. greatly. DISCUSSION. case Report The clinical presentation of unilateral painful calf swelling A 61-year-old man presented to the hospital with one day and palpable soft tissue mass is relatively common.

4 The history of left calf pain and swelling which occurred differential diagnosis includes DVT, haematoma , spontaneously. He had no previous history of bleeding gastrocnemius muscle tear, ruptured popliteal cyst, infection, tendency and was not on antiplatelets and anticoagulants. intra-muscular haemagioma and lymphoedema. He was hypertensive and hyperlipidemic and had a history of Gastrocnemius muscle rupture is associated with calcium sero-positive rheumatoid arthritis. He was on tab Amlodipine deficiencies, phosphorus deficiency, vitamin D deficiency, 10mg and Lipitor 10mg daily. The last flare of the arthritis prolonged incumbency with resulting myositis and struggling was two months ago, affecting the shoulders and wrist joints to rise occasionally precipitate rupture of the muscle. There and he was prescribed tab Methotrexate mg weekly and were very few case reports of Spontaneous calf haematoma supplemented with tab Folate 5 mg daily.

5 His C-reactive being reported 1-3. Interestingly, most of the patients were protein and erythrocyte sedimentation rate (ESR) had male, in the middle or elderly age group and no cause of the returned to near normal. bleed could be elucidated. His pulse rate was 90/ minute and blood pressure was 160/90 diagnosis is based on a thorough history and physical mmHg. The left calf was noted to be swollen and tender, examination. History includes the onset and duration of especially over the medial aspect. The foot pulses were symptoms, trauma, previous DVT, bleeding disorders, palpable and were of normal volume. General examination malignancy, presence of prior swelling or birth marks, use of was non-remarkable. anticoagulants or antiplatelets, and past history of lower limb surgery. A careful physical examination is important but often not specific 3. This article was accepted: 29 October 2013. Corresponding Author: Zubaidah Nor Hanipah, University Putra Malaysia, Department of Surgery, FPSK, UPM Serdang, Serdang, Selangor 43000, Malaysia Email: 44 Med J Malaysia Vol 69 No 1 February 2014.

6 Spontaneous calf haematoma : case Report Fig. 1 : T2-weighted MRI showing a well circumscribed swelling Fig. 2 : Intra operative finding of organised clots just beneath of the left calf ; suggestive of a calf haematoma the deep fascia, indenting the gastrocnemius muscle . In this patient, the initial diagnosis was calf DVT and duplex The patient has a history of seropositive rheumatoid arthritis scan showed a well localized swelling within the posterior and was on methotrexate. There is a remote possibility that compartment of the left calf . MRI was performed to exclude this patient could have small vessel arteritis and these vessels common pathologies like muscle tear, haemangioma and could have ruptured while on immunosuppresssion. ruptured Baker's cyst 4-5. MRI showed a well circumscribed calf However, no source of bleed could be identified in this patient haematoma indenting the calf muscle. intraoperatively and on MRI.

7 Commonly, tender calf swelling with no antecedent history of This case illustrates the importance of imaging before trauma is sometimes managed empirically as DVT; especially empirical management of Spontaneous tender calf swelling. in the night or over the weekends where ultrasound facility MRI is an essential diagnostic modality to identify the site, may not be readily available. D-Dimer might have returned extent and source of bleed. While the condition is rare, positive for this patient secondary to the blood clot. Had surgical evacuation yields good results. anticoagulant be administered before the ultrasound scan, REFERENCES. the condition might have worsened. MRI is essential as a tool to determine the cause of the bleed and might show up potentially serious conditions like a sarcoma that warrants 1. Wolff JP, Smiley RH. Spontaneous hematoma of the calf . J Oklahoma State Med Assn 1966; 59: 619-21.

8 Biopsy and resection. 2. Friedlander HL. Chronic expanding hematoma of the calf . J Bone Joint Surg 1968; 50A: 1237-41. In this patient, a correct diagnosis of calf hematoma was 3. Hoffman RD, Buckwalter JA. Spontaneous calf hematoma: A Report of two made and the clot was evacuated under general anaesthesia. cases diagnosed with MRI. Iowa Orthopedic Journal 1998 ;18: 142-5. 4. Maria C, Vicenzino B. Differential diagnosis of a soft tissue mass in the Intra-operative finding of a huge blood clot beneath the deep calf . J Orthop Sports Phys Ther. 2005; 35(2): 88-94. fascia was unusual. Most Spontaneous calf haematomas 5. Buetow PC, Kransderf MJ, Moser Jr RP, Jelinek JS, Berrey BH. Radiological reported were in the gastrocnemus or soleous muscles. It appearance of intramuscular hemangioma with emphasis on MR. Imaging. AJR 1990; 154: 563-7. might represent minor tears that were not readily noticed. Med J Malaysia Vol 69 No 1 February 2014 45. 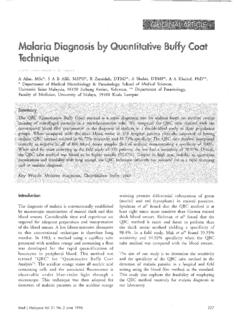 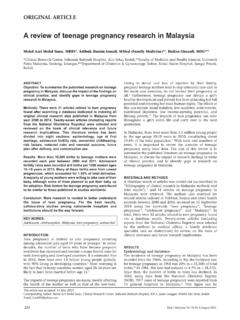 A review of teenage pregnancy research in Malaysia 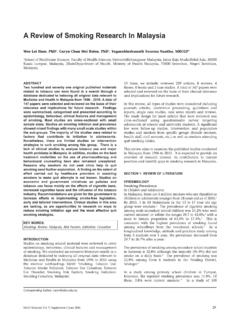 A Review of Smoking Research In Malaysia - e …

The Comparative Accuracy of Ultrasound and …

The Comparative Accuracy of Ultrasound and Mammography in The Detection of Breast Cancer Med J Malaysia Vol 69 No 2 April 2014 81 Table I: Demographic details and indications for imaging according to breast cancer status 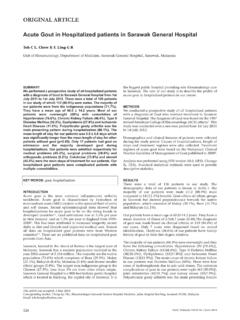 Sarawak General Hospital is a 800-bed tertiary public hospital which is located in Kuching, ... mirrored worldwide data on gout, which showed that gout is 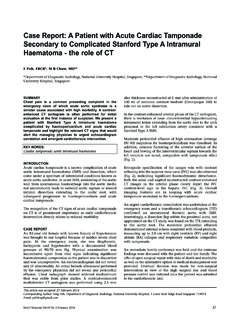 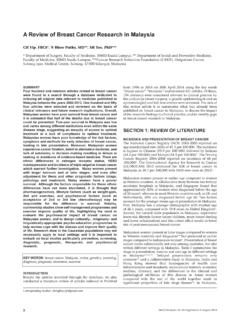 A Review of Breast Cancer Research in Malaysia - e … 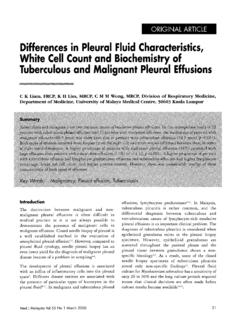 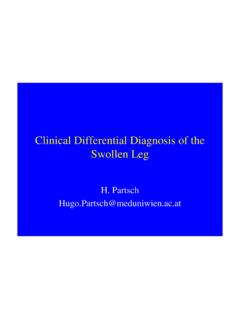 GUIDELINES ON THE MANAGEMENT OF CELLULITIS … 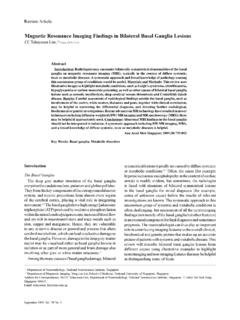 Evaluating and Treating Patients with Polyarthritis …

APPROACH TO DIAGNOSING POLYARTICULAR DISEASE As mentioned previously, a careful history and physi-cal examination are key to accurate diagnosis of poly- 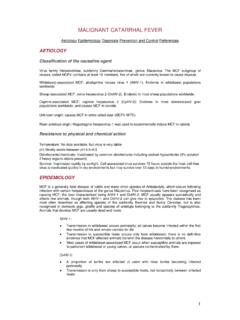 Please save a copy for your records and feel free to …

Please save a copy for your records and feel free to share a copy with your veterinarian as well. This packet is made available through Greyhound Adoption of Ohio, Inc. by William E. Feeman III, DVM.

Your, Record, Free, Copy, Fele, Copy for your records and feel free 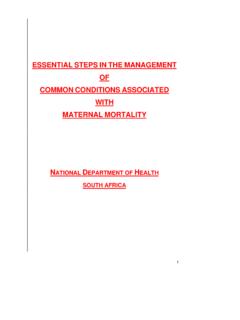 ESSENTIAL STEPS IN THE MANAGEMENT OF … 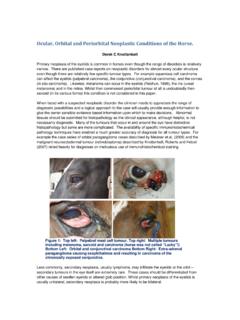 Ocular, Orbital and Periorbital Neoplastic Conditions of the Horse. Derek C Knottenbelt Primary neoplasia of the eyelids is common in horses even though the range of disorders is relatively 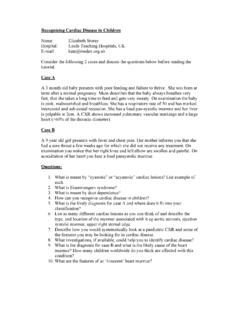