SPRINKLER IRRIGATION Introduction In the SPRINKLER method of IRRIGATION , water is sprayed into the air and allowed to fall on the ground surface somewhat resembling rainfall. The spray is developed by the flow of water under pressure through small orifices or nozzles. The pressure is usually obtained by pumping. With careful selection of nozzle sizes, operating pressure and SPRINKLER spacing the amount of IRRIGATION water required to refill the crop root zone can be applied nearly uniform at the rate to suit the infiltration rate of soil. Advantages of SPRINKLER IRRIGATION Elimination of the channels for conveyance, therefore no conveyance loss Suitable to all types of soil except heavy clay Suitable for irrigating crops where the plant population per unit area is very high.

soils are greatly different in the design area. Fig.6 Layout of sprinkler irrigation system . Selecting the most appropriate sprinkler systems . While selecting a sprinkler system, the most important physical parameters to be . considered are: 1. The crop or crops to be cultivated. 2. The shape and size (acres) of the field. 3. The topography ...

1 SPRINKLER IRRIGATION Introduction In the SPRINKLER method of IRRIGATION , water is sprayed into the air and allowed to fall on the ground surface somewhat resembling rainfall. The spray is developed by the flow of water under pressure through small orifices or nozzles. The pressure is usually obtained by pumping. With careful selection of nozzle sizes, operating pressure and SPRINKLER spacing the amount of IRRIGATION water required to refill the crop root zone can be applied nearly uniform at the rate to suit the infiltration rate of soil. Advantages of SPRINKLER IRRIGATION Elimination of the channels for conveyance, therefore no conveyance loss Suitable to all types of soil except heavy clay Suitable for irrigating crops where the plant population per unit area is very high.

2 It is most suitable for oil seeds and other cereal and vegetable crops Water saving Closer control of water application convenient for giving light and frequent IRRIGATION and higher water application efficiency Increase in yield Mobility of system May also be used for undulating area Saves land as no bunds etc. are required Influences greater conducive micro-climate Areas located at a higher elevation than the source can be irrigated Possibility of using soluble fertilizers and chemicals Less problem of clogging of SPRINKLER nozzles due to sediment laden water Crop response to SPRINKLER The trials conducted in different parts of the country revealed water saving due to SPRINKLER system varies from 16 to 70 % over the traditional method with yield increase from 3 to 57 % in different crops and agro climatic conditions.

4 They may also be mounted on posts above the crop height and rotated through 90 0, to irrigate a rectangular strip. In rotating type sprinklers, the most common device to rotate the SPRINKLER heads is with a small hammer activated by the thrust of water striking against a vane connected to it. Fig .1 Example of a few rotating type SPRINKLER IRRIGATION systems 2) Perforated pipe system : This method consists of drilled holes or nozzles along their length through which water is sprayed under pressure. This system is usually designed for relatively low pressure (1 kg/cm2). The application rate ranges from to 5 cm per hour for various pressure and spacing. Based on the portability, SPRINKLER systems are classified into the following types: (i) Portable system : A portable system has portable main lines, laterals and pumping plant Fig.

7 Centrifugal pump is used when the distance from the pump inlet to the water surface is less than eight meters. For pumping water from deep wells or more than eight meters, a turbine pump is suggested. The driving unit may be either an electric motor or an internal combustion engine. (ii) Tubings: Mains/submains and laterals: The tubings consist of mainline, submanins and laterals. Main line conveys water from the source and distributes it to the submains. The submains convey water to the laterals which in turn supply water to the sprinklers. Aluminum or PVC pipes are generally used for portable systems, while steel pipes are usually used for center-pivot laterals. Asbestos, cement, PVC and wrapped steel are usually used for buried laterals and main lines.

8 (iii) Couplers: Couplers are used for connecting two pipes and uncoupling quickly and easily. Essentially a coupler should provide (a) a reuse and flexible connection (b) not leak at the joint (c) be simple and easy to couple and uncouple (d) be light, non-corrosive, durable. (iv) SPRINKLER Head: SPRINKLER head distribute water uniformly over the field without runoff or excessive loss due to deep percolation. Different types of sprinklers are available. They are either rotating or fixed type. The rotating type can be adapted for a wide range of application rates and spacing. They are effective with pressure of about 10 to 70 m head at the SPRINKLER . Pressures ranging from 16 to 40 m head are considered the most practical for most farmers.

9 SPRINKLER head Fixed head sprinklers are commonly used to irrigate small lawns and gardens. Perforated lateral lines are sometimes used as sprinklers. They require less pressure than rotating sprinklers. They release more water per unit area than rotating sprinklers. Hence fixed head sprinklers are adaptable for soils with high intake rate. (v) Fittings and accessories: The following are some of the important fittings and accessories used in SPRINKLER system . (a) Water meters: It is used to measure the volume of water delivered. This is necessary to operate the system to give the required quantity of water. (b) Flange, couplings and nipple used for proper connection to the pump, suction and delivery.

10 (c) Pressure gauge: It is necessary to know whether the SPRINKLER system is working with desired pressure to ensure application uniformity. (d) Bend, tees, reducers, elbows, hydrants, butterfly valve and plugs. (e) Fertilizer applicator: Soluble chemical fertilizers can be injected into the SPRINKLER system and applied to the crop. The equipment for fertiliser application is relatively cheap and simple and can be fabricated locally. The fertilizer applicator consists of a sealed fertilizer tank with necessary tubings and connections. A venturi injector can be arranged in the main line, which creates the differential pressure suction and allows the fertilizer solution to flow in the main water line. Fig Different SPRINKLER pipes and fittings QRC HDPE SPRINKLER with metal latches QRC HDPE SPRINKLER with plastic latches QRC HDPE SPRINKLER base QRC HDPE pump connector QRC HDPE bend QRC HDPE tee QRC HDPE end plug General rules for SPRINKLER system design Main should be laid up and down hill Lateral should be laid across the slope or nearly on the contour For multiple lateral operation. 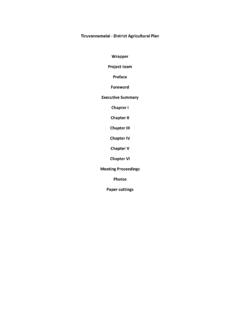 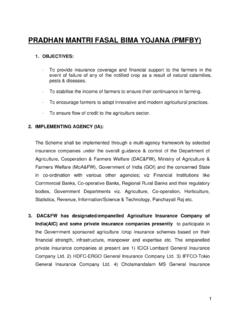 1 PRADHAN MANTRI FASAL BIMA YOJANA (PMFBY) 1. OBJECTIVES: - To provide insurance coverage and financial support to the farmers in the event of failure of any of the notified crop as a result of natural calamities, 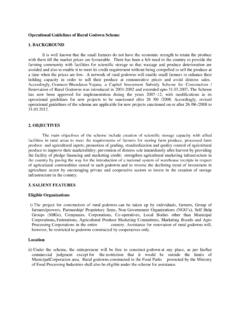 Operational Guidelines of Rural Godown Scheme 1. BACKGROUND It is well known that the small farmers do not have the economic strength to retain the produce 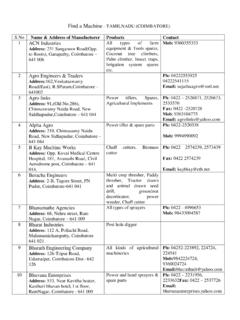 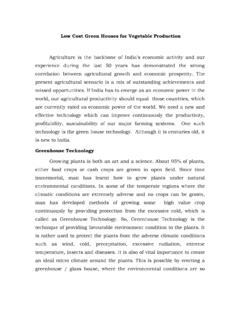 Low Cost Green Houses for Vegetable Production . Agriculture is the backbone of India’s economic activity and our experience during … 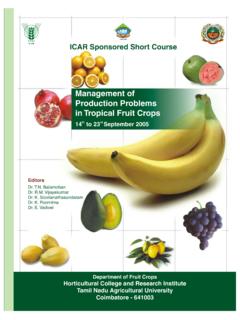 Management of Production Problems in Tropical … 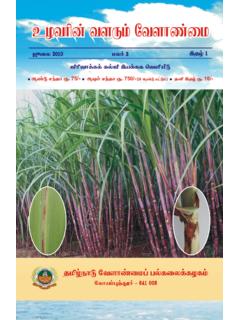 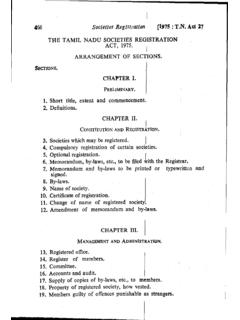 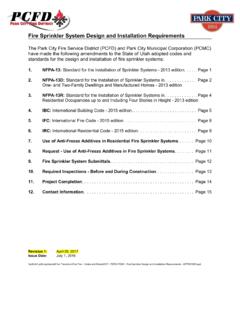 2.2.4 8.3.4.3 - Garages and Carports - Fire Sprinklers: Fire sprinklers shall only be required in residential subdivisions, where each residential private garage wall has been designed based on Table R302.1(2), Footnote a, of the 2015 International Residential Code (IRC), and where all dwellings in residential 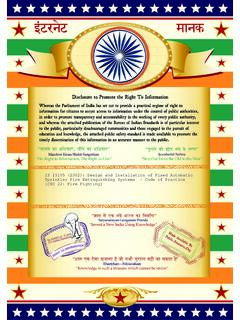 3.26 Installation Sprinkler Installation — Part of a sprinkler system comprising a set of installation main control valves, the associated downstream pipes and sprinklers. 3.27 Installation, Pre-action — A dry installation in which the alarm valve can be opened by an independent fire detection system in the protected area. 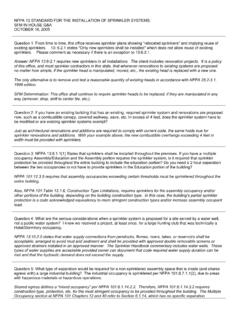 NFPA 13 STANDARD FOR THE INSTALLATION OF …

Oct 18, 2005 · NFPA 13 STANDARD FOR THE INSTALLATION OF SPRINKLER SYSTEMS: SFM IN HOUSE Q&A OCTOBER 18, 2005 ... required sprinkler system and renovations are proposed now, such as a combustible canopy, covered walkway, eave, etc. in excess of 4 feet, does the sprinkler system have to ... submit sprinkler design intent documents reviewed by … primary motivation for fire alarm system requirements in building and fire ... manual pull station. Also, when a sprinkler system activates and causes an alarm, it is a result of the sprinkler system detecting heat produced by the ... Some modifications in detector design are helping to reduce the unwanted . FIRE PROTECTION SYSTEMS . 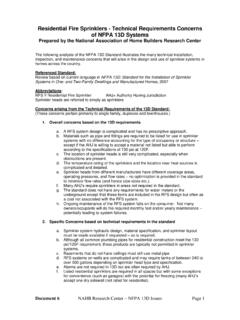 2. Specific Concerns based on technical requirements in the standard a. Sprinkler system hydraulic design, material specification, and sprinkler layout must be made available if requested – so is required. b. Although all common plumbing pipes for residential construction meet the 130 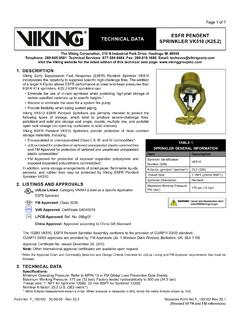 1. Remove the system from service, drain all water, and relieve all pressure on the piping. 2. Using the special sprinkler wrench, remove the old sprinkler and install the new unit. Care must be taken to ensure that the replacement sprinkler is the proper model and style, with the correct orifice size, temperature rating, and response ...