STANDARDIZATION OF GEOGRAPHIC DATA: THE …

2 The legal and technical response of the european Union to this request is the INSPIRE Directive (Infrastructure for Spatial Information in the european Community - 2007/2/EC). The Directive ensures the compatibility with adaptation of common Implementing Rules (IR) in specific areas as Metadata, data Specifications, Network Services, data and Service Sharing, Monitoring and Reporting. This paper provides an overview of the Directive, IRs and the technical support of their implementation illustrated with some examples. It concludes with some important issues for european geography to consider and address. Keywords: spatial data infrastructure, INSPIRE, metadata, ISO 1900 standards 1.

3 INTRODUCTION. Spatial information data relating to local, regional or global scales are the basis of geography. Due to the recent developments in space technology the emphasis has been shifted to global data which are available for everybody in unbelievable abundance. Only the modern means of information technology and the task sharing could help to handle the large quantity of data . Obviously it generated a need for a unified and standardized Spatial data Structure (SDI). The aim of SDI was clear (Dutch national stimulation program on SDI, 2010): 1) to share data evaluation and eliminate duplicated efforts in data evaluation; 2) to make GEOGRAPHIC data worldwide easily accessible; 3) to support seamless integration of GEOGRAPHIC data from different sources.

4 Bartha european Journal of Geography 2 2 79-89. The US GEOGRAPHIC data Committee was one of the first bodies that has been legally mandated to set up a national Spatial data Infrastructure (Executive Order 12906, 1994 ). which contains the following definitions of SDI: (a) National Spatial data Infrastructure'' ( NSDI'') means the technology, policies, standards, and human resources necessary to acquire, process, store, distribute, and improve utilization of geospatial data . (b) Geospatial data '' means information that identifies the GEOGRAPHIC location and characteristics of natural or constructed features and boundaries on the earth.

5 This information may be derived from, among other things, remote sensing, mapping, and surveying technologies. Statistical data may be included in this definition at the discretion of the collecting agency. (c) The National Geospatial data Clearinghouse'' means a distributed network of geospatial data producers, managers, and users linked electronically Throughout Europe there have been a number of national and regional initiatives to establish Spatial data Infrastructures, most of them are driven by public administration or by public-private partnerships (Masser, 2007). Prominent examples include: Nomenclature des unit s territoriales statistiques (NUTS).

6 Arrangements on european Map Projections Draft Arrangements on an european Vertical Reference Systems Draft Arrangements on an european Reference Grid IMAGE 2000 and CORINE Landcover 2000. european Soil Atlas EuroBoundaryMap EuroRegionalMap Unfortunately, spatial information in Europe can be described as fragmentations of datasets and sources, with gaps in availability, lack of interoperability or harmonization between datasets at different geographical scales and duplication of information collection. Therefore SDI initiatives in Europe lacked a coherent, Europe wide framework on for instance which standards should be used, how to formulate data sharing policies, and more important which general feature models ( for example attribute names, common spatial reference models, etc.)

7 To follow. The multilingual nature of the european Union increases further this complexity. However, awareness has grown at national and at EU level about the need for quality geo-referenced information to support our understanding of the complexity and interactions between human activities and environmental pressures and impacts. Initiatives to establish a european Spatial data Infrastructure are therefore timely and relevant but do also face major challenges given the general situation outlined above and the many stakeholder interests to be addressed. Thanks to this awareness, in September 2001 an E-ESDI Expert group, representing geoinformation experts of the european Commission, the european Environmental Agency, and Member States' environmental and national mapping bodies started the elaboration of a proposal for a european directive to establish an european Spatial data Infrastructure (ESDI).

8 The adoption of the proposal for a directive on establishing an Infrastructure for Spatial Information in the european Community (INSPIRE) by the european Commission in July 2004 marked the first important step on the way to a european -wide legislative framework to achieve an european Spatial data Infrastructure. 80 Bartha european Journal of Geography 2 2 79-89. The first overview of an organizational and a process model for INSPIRE was elaborated in a preparatory phase (2005-06). Five drafting teams were nominated, each being mandated to draft implementation rules according to the following five components of INSPIRE: Interoperability of Spatial data Sets and Services - enlisting 34 data topics that shall be made available in the final infrastructure (see later ISO 19100 series).

9 Metadata - to allow the discovery and evaluation of INSPIRE relevant data sets and services in Europe (see later provision for Metadata). Network Services - to make it possible to discover, transform, view and download spatial data and to invoke spatial data and e-commerce services (see later provision for Network Services). data Sharing - to allow an as easy as possible' data exchange between public bodies and to allow third parties, especially citizens to have an as much as possible free and easy access to spatial information covered by INSPIRE (see later provision for data policy). Coordination and Complementary Measures to monitor the organizational and management aspects of the INSPIRE implementation.

10 The five components above are illustrated on The five components of INSPIRE. In March 2007 the INSPIRE proposal was adopted as Directive 2007/2/EC of the european Parliament and of the Council, the Directive was published in the official Journal on the 25th April 2007. The INSPIRE work programm was updated to address the INSPIRE. transposition phase (2007-09). The overall implementation was planned to take more than 10. years, thus by 2019 INSPIRE can be expected to be fully implemented. The shortest implementation time frame is given for the provision of metadata, with first parts to be implemented in 2010, followed by the Network Services being operational (~2011) and then by having a full set of Implementing Rules for INSPIRE data Specifications (~ up to 2012). 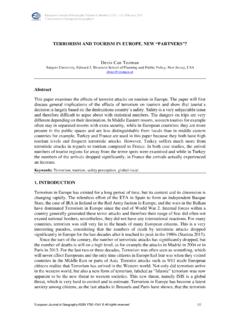 TERRORISM AND TOURISM IN EUROPE, NEW … 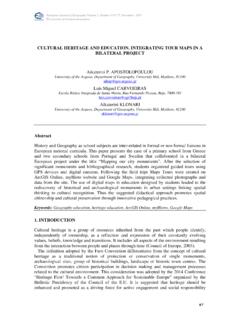 Cultural heritage is a group of resources inherited from the past which people identify, independently of own, as a reflection and expression of their constantly evolving ership values, beliefs, knowledge and … 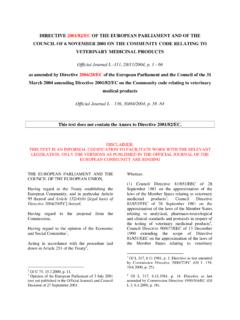 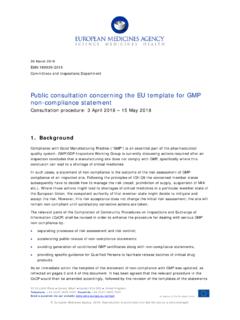 European, Of the european 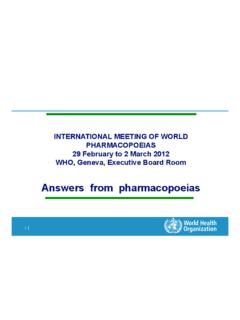 1. Name of pharmacopoeia - WHO

12 | 8. Collaboration with and/or being part of a (different) national/regional pharmacopoeia (3/4) Observership to the Ph. Eur.: – Allows for participation in the scientific work of the European Pharmacopoeia