Strategy for New india @ 75. November 2018. Preface I. ndia is on the cusp of a major transformation. Change has been in the making over the last four years. The economy is finally moving out of the negative legacies of the past, specially the reckless credit expansion. india has regained its position as the fastest growing large economy in the world. This is highly commendable. However, to meet the rising aspirations of our young population, india needs to achieve and sustain a high rate of GDP growth for the next three decades. There will be several milestones in this long and arduous journey. The first of these milestones will be in 2022 when india celebrates the 75th anniversary of its independence. The government's goal is for india to be a USD trillion economy when we celebrate the platinum jubilee of our independence.

1 Strategy for New india @ 75. November 2018. Preface I. ndia is on the cusp of a major transformation. Change has been in the making over the last four years. The economy is finally moving out of the negative legacies of the past, specially the reckless credit expansion. india has regained its position as the fastest growing large economy in the world. This is highly commendable. However, to meet the rising aspirations of our young population, india needs to achieve and sustain a high rate of GDP growth for the next three decades. There will be several milestones in this long and arduous journey. The first of these milestones will be in 2022 when india celebrates the 75th anniversary of its independence. The government's goal is for india to be a USD trillion economy when we celebrate the platinum jubilee of our independence.

2 Moreover, the Prime Minister has given his clarion call for establishing a New india by 2022. The Strategy for New india @ 75' captures three key messages from the Prime Minister. First, development must become a mass movement, in which every Indian recognizes her role and also experiences the tangible benefits accruing to her in the form of better ease of living. Collective effort and resolve will ensure that we achieve a New india by 2022 just like independence was achieved within five years of Mahatma Gandhi giving his call of Quit india in 1942. The direct implication of ensuring rapid growth with inclusion is that policymaking will have to be rooted in Indian ground realities and emphasize the welfare of all in both design and implementation. Second, development Strategy should help achieve broad-based economic growth to ensure balanced development across all regions and states and across sectors.

3 This implies embracing new technologies fostering innovation and upskilling. We will have to focus on the necessary modernization of our agriculture and mainstreaming of regions such as the North East, hilly states and the 115 Aspirational Districts. The direct outcome of this will be improved regional and inter-personal equity and elimination of dualism that has so far characterised our economy. We will put in place an economy that is predominantly formal, rule-driven and facilitates investment and innovation. Third, the Strategy when implemented, will bridge the gap between public and private sector performance. The Prime Minister has focused on putting in place a development state' in place of the soft state' that this government had inherited. In this context, the government has focused on the efficient delivery of public services, rooting out corruption and black economy, formalizing the economy and expanding the tax base, improving the ease of doing business, nursing the stressed commercial banking sector back to a healthy state, and stopping leakages through direct benefit transfers and widespread use of the JAM trinity.

4 Iii Strategy for New india @ 75. Efficient, transparent and accountable governance has come to be recognized as this government's USP. This will ensure that india will not only achieve its ambitious goals for 2022, but also go on to become one of the two largest economies in the world by 2047, when we celebrate the centenary of our independence. Strategy for New india @ 75' has identified 41 different areas that require either a sharper focus on implementing the flagship schemes already in place or a new design and initiative to achieve india 's true potential. Each chapter summarizes the current status of the sector, takes full cognizance of the progress made thus far and spells out the objectives. It then identifies the binding constraints and proposes measures to address these constraints. It is our hope that this new approach will provide an inventory of readily implementable measures for the government departments and agencies both in the central and state governments.

5 The focus of the Strategy is to further improve the policy environment in which private investors and other stakeholders can contribute their fullest towards achieving the goals set out for New india 2022. We have followed a deeply participative approach in preparing the Strategy . The process started with a series of consultations with all possible stakeholders. Each area vertical in NITI Aayog had in depth consultations with all three groups of stakeholders, viz., business persons, academics including scientists, and government officials. This was followed by consultations held by NITI Aayog with seven sets of stakeholders that included scientists and innovators, farmers, civil society organizations, think tanks, labour representatives and trade unions, as well as industry representatives (Lists at Annex 1 and 2).

6 Each chapter draft was sent to the respective line ministry for their inputs, suggestions and comments. The completed draft document was circulated to all the States and Union Territories. As many as 23 States and 4 Union Territories sent detailed and well considered comments and suggestions. These have helped in improving the draft by reflecting state specific features in various chapters. This exercise has further strengthened NITI Aayog's efforts at cooperative federalism. It will also encourage us to collaborate with the states to develop state specific development blueprints. With these extensive consultations and inputs, the Strategy reflects ground realities and a collective consensus on addressing the challenges and achieving the goals for a New india . The attempt is to present a set of ideas that can provide the basis for a constructive public-private-personal partnership and promote centre-state cooperation.

8 This task would not have been completed without the help of a dedicated team of experts attached to the Vice Chairman's office, led by Ramgopal Agarwala and Dhiraj Nayyar. The team consisted of Urvashi Prasad, Ranveer Nagaich, Devashish Dhar, Atisha Kumar, Chinmaya Goyal, Vaibhav Kapoor and Ajit Pai. Tara Nair provided crucial editing inputs. Preparing the Strategy is only the first step towards india 's economic transformation. The foresighted framers of our celebrated Constitution have set the enormous challenge of simultaneously completing india 's triple transition across social, political and economic fields. india is one of the very few countries that have taken on this historical challenge of completing the three transitions together. Having successfully taken forward the social and political transitions, india is now within sight of completing its economic transition as well.

9 This will see per capita incomes rising from about USD 1,900 in 2017-18 to around USD 3,000 in 2022-23. As outlined in this Strategy Document, successfully completing our economic transition will enable us to achieve freedom from squalor, illiteracy, corruption, poverty, malnutrition and poor connectivity for the common Indian. By 2022, New india will provide a solid foundation for clean, inclusive, sustained and sustainable growth for the next three decades. The Strategy for New india @ 75' reflects our preparedness to make this transition. Its recommendations are practical and detailed to facilitate time-bound implementation. All levels of government must work together to achieve the vision of New india . Working together as Team india ' will ensure prosperity for all while protecting our environment and promoting the emergence of an innovative eco-system, propelling india to the front ranks of the global economy. 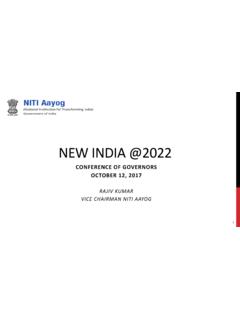 Guidelines for Scale-up support to Established … 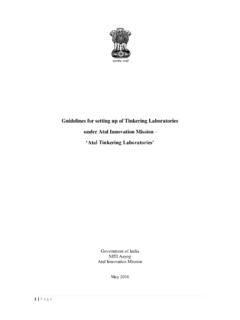 Guidelines for setting up of Tinkering Laboratories … 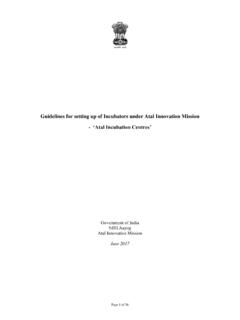 Guidelines for setting up of Incubators under Atal ... 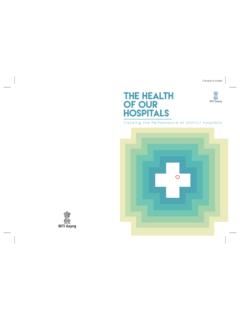 THE HEALTH OF OUR HOSPITALS - NITI Aayog

In a recent review of the health sector by the Hon’ble Prime Minister, it was decided that an online portal for tracking the performance of government 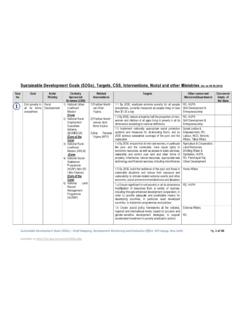 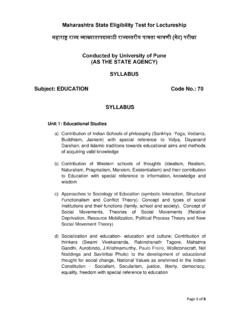 APPENDIX -1 Leading to Certificate in Education (C.Ed.) 1.0 Preamble 1.1.1 Early childhood Education ECE (0-6 years) is of crucial importance especially from the point of view of the development of child’s language, intelligence and 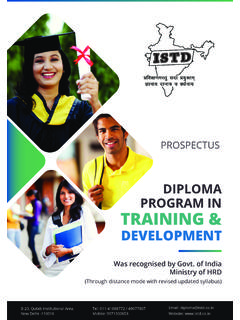 Was recognised by Govt. of India - istd.co.in

DIPLOMA PROGRAM IN Was recognised by Govt. of India Ministry of HRD (Through distance mode with revised updated syllabus) B-23, Qutab Institutional Area, 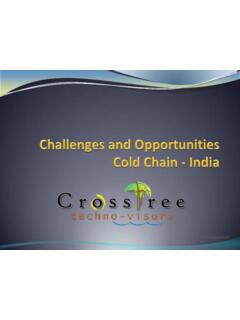 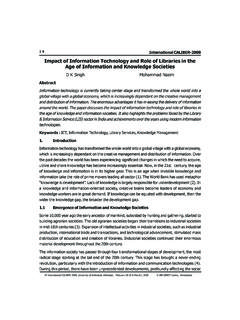 Impact of Information Technology and Role of Libraries in ... 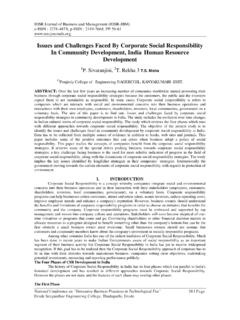 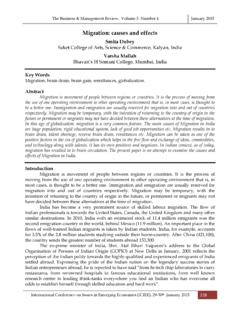 Education, And Standards for Pre-School Teacher Education, India, Cold chain, Impact of Information Technology and, Of Information and Knowledge Societies, And Challenges Faced By Corporate Social, Migration: causes and