POLICY GUIDANCE NOTE | 1 TradePOLICY GUIDANCE NOTE | 9 Strengthening sector policies FOR better food security AND nutrition RESULTSThis policy guidance note represents the continuation of a series of eight policy guidance notes that were jointly produced by theFood and Agriculture Organization of the United Nations (FAO) and the Directorate for International Cooperation and Development(DEVCO) of the European Commission, to boost food security and nutrition , sustainable agriculture and resilience. This, and subsequentnotes in the series are the sole creation and responsibility of FAO and cannot be considered as a product of any other organization. Coordinated by Ekaterina Krivonos Trade Policy team - Trade and Markets Division food and Agriculture of the United Nations Contributors: Flora Endl, Ishrat Gadhok, Georgios Mermigkas and Jung-eun Sohn.

1 POLICY GUIDANCE NOTE | 1 TradePOLICY GUIDANCE NOTE | 9 Strengthening sector policies FOR better food security AND nutrition RESULTSThis policy guidance note represents the continuation of a series of eight policy guidance notes that were jointly produced by theFood and Agriculture Organization of the United Nations (FAO) and the Directorate for International Cooperation and Development(DEVCO) of the European Commission, to boost food security and nutrition , sustainable agriculture and resilience. This, and subsequentnotes in the series are the sole creation and responsibility of FAO and cannot be considered as a product of any other organization. Coordinated by Ekaterina Krivonos Trade Policy team - Trade and Markets Division food and Agriculture of the United Nations Contributors: Flora Endl, Ishrat Gadhok, Georgios Mermigkas and Jung-eun Sohn.

2 Tim Martyn and Itziar Gonzalez are acknowledged for providing country case material, and Esther Wiegers, Trudy Wijnhoven and other colleagues from the nutrition and food Systems Division for thoughtful designations employed and the presentation of material in this information product do not imply the expression of any opinion whatsoever on the part of FAO concerning the legal or development status of any country, territory, city or area or of its authorities, or concerning the delimitation of its frontiers or boundaries. The mention of specific companies or products of manufacturers, whether or not these have been patented, does not imply that these have been endorsed or recommended by FAO in preference to others of a similar nature that are not views expressed in this information product are those of the author(s) and do not necessarily reflect the views of the food and Agriculture Organization of the United encourages the use, reproduction and dissemination of material in this information product.

3 Except where otherwise indicated, material may be copied, downloaded and printed for private study, research and teaching purposes, or for use in non-commercial products or services, provided that appropriate acknowledgement of FAO as the source and copyright holder is given and that FAO s endorsement of users views, products or services is not implied in any requests for translation and adaptation rights, and for resale and other commercial use rights should be made via or addressed to information products are available on the FAO website ( ) and can be purchased through FAO, 2017 Cover photo: FAO/Vyacheslav OseledkoPOLICY GUIDANCE NOTE | 9 STRENGTHENINGSECTOR policies FOR better food security AND nutrition RESULTSThis policy guidance note is part of a series that the food and Agriculture Organization of the United Nations (FAO) and partners are producing to support policy makers address the food security and nutrition situation in their country.

5 NTrade can have important benefits for food security and nutrition , but also implies some risks in the short and long terms. It is essential to understand the specific agriculture, trade, food security and nutrition conditions when formulating trade and related policies . nTrade and related policies must be formulated as part of a broader package of policies that prioritize long-term structural transformation objectives over short-term political or commercial interests, and the instruments of trade policies must be better aligned to country-specific in agricultural products is expected to continue to increase over the coming decades and will therefore influence the extent and nature of food security and nutrition across all regions of the world.

6 The challenge is how to ensure that the expansion of agricultural trade works for, and not against, the elimination of hunger, food insecurity and malnutrition. Trade policies affect levels of agricultural trade, which in turn affect availability of food in domestic markets, food prices and incomes, along with other important variables that ultimately affect food security and nutrition outcomes. The impact of trade policies on various aspects of food security and nutrition has given rise to intense debates at the national and global levels and has become central to many trade-related discussions and negotiations. This guidance note aims to support policy-makers and agriculture sector stakeholders in promoting greater coherence between trade and agricultural policies .

7 It articulates the linkages between trade and the four dimensions of food security , focusing on the sources of risks and potential benefits of an expansion in trade. The note also discusses the appropriateness of different trade and related policy measures in improving food security at different stages of development. Then it addresses the overarching question of how to enhance coherence of trade policies with food security in agricultural products has expanded almost threefold in value terms over the past decade, driven by high demand, particularly in emerging economies. With global demand for agricultural products expected to remain strong in the coming decades, the growth of trade is projected to continue to rise, albeit to a lesser degree than in the previous decade.

8 There has been increasing divergence in net trade in agricultural products by region since 2000, which is projected to widen further (Figure 1). This refers to higher reliance on food trade at the global level, with some regions becoming increasing net exporters and others increasing net importers. Different causes drive the diverging trend of regions becoming net importers/exporters. Asia is the fastest-growing food -importing region, led particularly by China, which is a net importer of several commodities. 2 POLICY GUIDANCE NOTE | 9 Imports into Sub-Saharan Africa have been increasing mainly due to the population growth of the region, while the Middle East and North Africa are rapidly becoming net importers, as food production lags behind the growing demand for agricultural products.

9 Among net exporting regions, Latin America leads, with production increases outstripping sustained consumption growth. In North America, which follows as the second largest net exporter, the export growth is a result of stagnant consumption in the region, rather than production growth. This evolution in food trade stems from an evolving global landscape. Some drivers of food consumption patterns include population and income growth, urbanization and shifting preferences from traditional cereal-based diets to more nutritious and diversified diets. At the same time, there is a growing demand for coarse grains, driven by their increasing use for animal feed and biofuel production. In responding to these changes, the market will be replete with more value-added products and robust global value chains (GVCs) with increasing levels of vertical coordination.

10 Another important trend in agricultural trade is the increasing concentration of exports of agricultural commodities in a few countries, while imports are more dispersed over a large number. The heavier concentration on few suppliers could exacerbate certain types of risks, such as those driven by climate events and sudden changes in trade measures. This concentration could become more worrisome since there is growing food -import dependency in resource-constrained countries. Combined with high food -import dependency, volatile prices of agricultural commodities, such as those that were observed during the price spikes between 2006 and 2011, could introduce market instability and food insecurity. As a consequence of the growth in food trade, and the changing patterns of food consumption and production, trade will play an increasingly important role in influencing the extent and nature of food security across all regions of the globe. 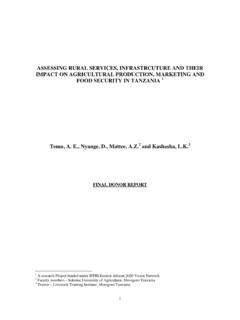 ASSESSING RURAL SERVICES AND THEIR IMPACT ON … 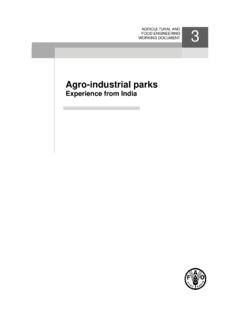 4 The country’s requirement for food grains in order to provide for its population is projected to be 300 million tonnes by 2025.6 The estimate of food grains production in 2015-16 is 252 million. This implies that the crop output needs to grow at an annual average of 2%, which is close to the current 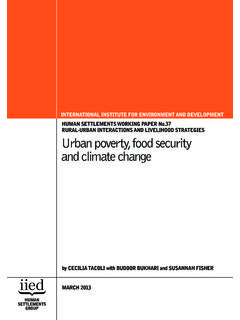 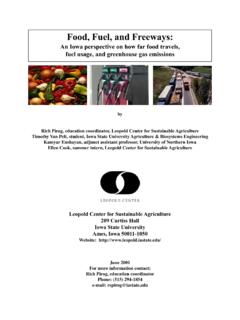