3 Is not a Stuck Point , because it is aquestion. Instead consider what answer to your question is at the back of yourmind, such as I will not have a future. Moral statements:For example, The military should take care of soldiers is not a Stuck Point ,because it reflects an ideal standard of behavior. Instead consider how thisstatement pertains to you specifically, such as The military failed me or I can ttrust the government. 11 Examples of Stuck points 1. If I had done my job better, then other people would have survived. 2. Other people were killed because I messed up. 3. Because I did not tell anyone, I am to blame for the abuse.

4 4. Because I did not fight against my attacker, the abuse is my fault. 5. I should have known he would hurt me. 6. It is my fault the accident happened. 7. If I had been paying attention, no one would have died. 8. If I hadn t been drinking, it would not have happened. 9. I don't deserve to live when other people lost their lives. 10. If I let other people get close to me, I'll get hurt again. 11. Expressing any emotion means I will lose control of myself. 12. I must be on guard at all times. 13. I should be able to protect others. 14. I must control everything that happens to me. 15. Mistakes are intolerable and cause serious harm or death.

5 16. No civilians can understand me. 17. If I let myself think about what has happened, I will never get it out of my mind. 18. I must respond to all threats with force. 19. I can never really be a good, moral person again because of the things that I have done. 20. Other people should not be trusted. 21. Other people should not trust me. 22. If I have a happy life, I will be dishonoring my friends. 23. I have no control over my future. 24. The government cannot be trusted. 25. People in authority always abuse their power. 26. I am damaged forever because of the rape. 27. I am bad because I killed others. 28. I am unlovable because of [the trauma]. 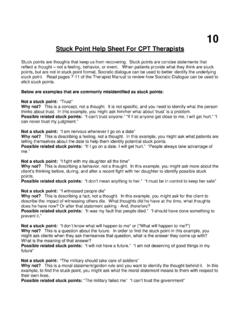 10 Stuck Point Help Sheet For CPT Therapists Stuck points are thoughts that keep us from recovering. Stuck points are concise statements that reflect a thought – not a feeling, behavior, or event. 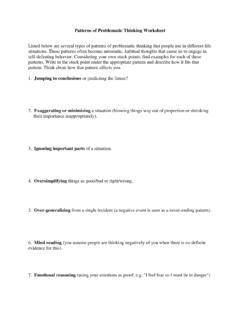 self-defeating behavior. Considering your own stuck points, find examples for each of these patterns. Write in the stuck point under the appropriate pattern and describe how it fits that pattern. Think about how that pattern affects you. 1. Jumping to conclusions or predicting the future? 2. 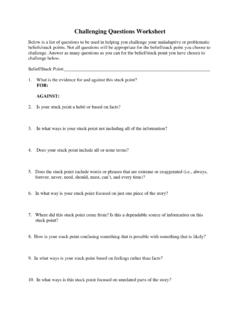 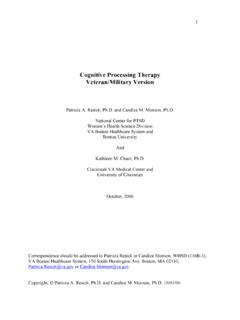 Therefore, the focus is on normal grief, myths about bereavement, and stuck points that therapists may need to focus on in this domain. If the bereavement session is added to CPT, then the assignment to write an impact statement would be delayed one session (see Session 1) for those who have PTSD due to a traumatic death. ...

Introducing stuck points Stuck points are often more easily understood when they are first described in non-traumatic terms. Since reminders of the trauma often bring up anxiety, people may have difficulty “hearing” the description of stuck points, so describing them using more routine examples can … 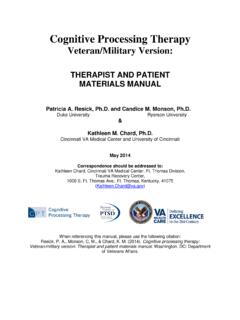