2 This chapter focuses only on commercial techniques for production of detergent range sulfonates and sulfates. Basic Chemistry Although sulfonates and sulfates are similar in structure, there are important differences. Figure 1 shows the reaction to produce a sulfonate. Sulfur trioxide (SO3) reacts with an organic molecule in this case an alkyl benzene to form a sulfur-carbon bond. One of the characteristics of this process is that the resultant alkyl benzene sulfonic acid is a stable molecule. Figure 1. Sulfonation SO3 + (CH2)11- CH3 CH 3- (CH2)11 S O H +OOSulfurTrioxideAlkyl BenzeneAlkyl Benzene Sulfonic Acid Page 2 of 36 1997 The Chemithon Corporation Sulfation , on the other hand, involves forming a carbon-oxygen-sulfur bond as shown in Figure 2. The resultant alcohol sulfuric acid is not hydrolytically stable.

3 Unless neutralized, it decomposes to form sulfuric acid and the original alcohol. Figure 2. Sulfation SO3 + CH3 - (CH2)10 - CH2 - OH CH3 - (CH2)10 - CH2 - O - S - O H+ OOSulfurTrioxidePrimaryAlcoholAlcoholSul furic Acid Because they are stable, sulfonic acids can be isolated, stored and shipped as an article of commerce. Sulfates, due to their instability, are available only as neutral compounds. This stability difference in the products of reaction with SO3 also has a profound impact on the choice of process used to produce sulfonates or sulfates. Some Processes , such as oleum Sulfonation , cannot be used to make alcohol sulfates containing a low level of inorganic sulfate. However others, such as sulfamic acid Sulfation , cannot be used to make sulfonic acids. SO3 is an aggressive electrophilic reagent that rapidly reacts with any organic compound containing an electron donor group.

4 Sulfonation is a difficult reaction to perform on an industrial scale because the reaction is rapid and highly exothermic, releasing approximately 380 kJ/kg SO3 (800 BTUs per pound of SO3) reacted[2]. Most organic compounds form a black char on contact with pure SO3 due to the rapid reaction and heat evolution. Additionally, as shown in Figure 3, the reactants increase in viscosity between 15 and 300 times as they are converted from the organic feedstock to the sulfonic acid[1] . This large increase in viscosity makes heat removal difficult. The high viscosity of the formed products reduces the heat transfer coefficient from the reaction mass. Effective cooling of the reaction mass is essential because high temperatures promote Figure 3. Viscosity Increase on Sulfonation Linear alkyl benzene5400 Branched alkyl benzene151000 Ethoxylated alcohol20500 Tallow alcohol10150 Alpha olefins31000 FeedAcidViscosityViscosityFeedstock(cp) @ 40 - 50 C Page 3 of 36 1997 The Chemithon Corporation side reactions that produce undesirable by-products.

5 Also, precise control of the molar ratio of SO3 to organic is essential because any excess SO3, due to its reactive nature, contributes to side reactions and by-product formation. Therefore, commercial scale Sulfonation reactions require special equipment and instrumentation that allows tight control of the mole ratio of SO3 to organic and rapid removal of the heat of reaction. Historically, the problem of SO3 reactivity has been solved by diluting and/or complexing the SO3 to moderate the rate of reaction. Commercially, the diluting or complexing agents (Figure 4) include ammonia (sulfamic acid), hydrochloric acid (chlorosulfuric acid), water or sulfuric acid (sulfuric acid or oleum) and dry air (air/SO3 film Sulfonation ). Control of the ratio of SO3 to organic raw material is vital to achieving the desired product quality with use of any of the agents.

6 Additionally, these Processes require heat removal to maintain product quality. As we examine each of these industrial Processes we will see how they have been engineered to achieve these requirements. Figure 4. Agents to Reduce SO3 Reactivity XAmmoniaNH3 + SO3HO - S - NH2 XHydrochloric AcidHCl + SO3H - O - S - ClXWaterH2O + SO3 H-O-S-O-H + SO3 SO3 H-O-S-O-HXDry AirDry Air + SO3 to 8% SO3 in Dry AirOOSulfamic AcidChlorosulfonic AcidOOOOOOS ulfuric AcidOleum Commercial Sulfonation Processes Sulfamic acid (NH2SO3H) is used to sulfate alcohols and ethoxylated alcohols to form an ammonium neutralized salt. A typical reaction is shown in Figure 5. The reaction goes Page 4 of 36 1997 The Chemithon Corporation directly to the ammonium salt of the alcohol sulfuric acid. Sulfamic acid is an expensive reagent, costing approximately US$ per pound of reactive SO3.

8 Figure 6 shows a typical reaction. Note that as the reaction moves to completion, hydrochloric acid (HCl) is released. This acid must be scrubbed or otherwise recovered. Chlorosulfuric acid is an expensive source of SO3 although it is approximately one half the cost of sulfamic acid. The cost per pound of reactive SO3 is US$ It is a rapid, stoichiometric reactant. However, it is still more expensive than other sources of SO3. It is also corrosive and a hazardous chemical to handle and liberates HCl as a by-product during the reaction. The HCl can be recovered by scrubbing the off-gas stream with water, or neutralized by scrubbing the off-gas with a dilute basic scrubbing solution. In either case, additional equipment and complexity are added to the process. Page 5 of 36 1997 The Chemithon Corporation Figure 6.

9 Chlorosulfonic Acid Sulfation H - O - S - Cl + CH3 - (CH2)10 - CH2 - OH+ CH3 - (CH2)10 - CH2 - O - S - O H + HClOOLauryl alcoholsulfuric acidChlorosulfonicacidOOLauryl alcoholHydrochloricacid Sulfuric acid (H2SO4) and oleum (SO3 H2SO4) are widely used as sulfonating agents. Oleum is used to sulfonate alkyl benzene and sulfate fatty alcohols for heavy duty detergents. The reaction is shown in Figure 7. It is an equilibrium process, as water is formed in the reaction and the resultant water dilutes the oleum and/or sulfuric acid. The Sulfonation reaction stops when the sulfuric acid concentration drops to approximately 90%. This "spent" acid may be separated from alkyl benzene sulfonic acid to produce a product, which on neutralization contains a relatively low level (6-10%) of sodium sulfate. When fatty alcohols are sulfated, the spent acid cannot be separated.

10 It must be neutralized with the alcohol sulfuric acid to make a product containing a high level of sodium sulfate. Oleum is relatively inexpensive about US$ per pound of reactive SO3. Oleum Sulfonation can be operated as either a batch or continuous process. This process has the dual advantage of low SO3 cost and low capital equipment cost. However, it has the disadvantage of being an equilibrium process which leaves large quantities of un-reacted sulfuric acid. This Figure 7. Sulfuric Acid / Oleum H - O - S - O - H + (CH2)11 - CH3 Sulfuric acidOOAlkyl benzene+ H O - S (CH2)11 - CH3 + H2 OOOW aterAlkyl benzene sulfonic acid Page 6 of 36 1997 The Chemithon Corporation waste acid must be separated from the reaction mixture and subsequently disposed. In North America, the expense of disposing the "spent" sulfuric acid has become so high that the process economics are now questionable.

Transform business processes with electronic and … 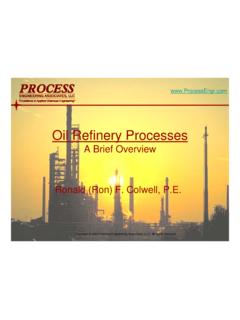