Series 1776 www.thelancet.com Vol 376 November 20, 2010 The gap between available and required resources to tackle the global burden of obesity and chronic diseases is already very large and, on present trends, is set to

2 With obesity , including aspects of diet and physical inactivity, in Brazil, China, India, Mexico, Russia, and South 6736(10)61514-0. Africa. England was included for comparative purposes. Several population-based prevention policies can be See Comment Lancet 2010;. expected to generate substantial health gains while entirely or largely paying for themselves through future 376: 1619 21. reductions of health-care expenditures. These strategies include health information and communication strategies See Online/Comment that improve population awareness about the bene ts of healthy eating and physical activity; scal measures that increase the price of unhealthy food content or reduce the cost of healthy foods rich in bre; and regulatory 6736(10)61856-9, and measures that improve nutritional information or restrict the marketing of unhealthy foods to children.

3 A package 6736(10)61891-0. of measures for the prevention of chronic diseases would deliver substantial health gains, with a very favourable This is the third in a Series of ve cost-e ectiveness pro le. papers about chronic diseases Health Division, Organisation Introduction were steepest in urban areas in the west of the continent, for Economic Co-operation and The action plan devised by WHO as part of the global where rates approached 40% in the early 2000s, almost Development (OECD), Paris, strategy for the prevention and control of non- doubling in less than 10 Overweight and obesity France (M Cecchini MD, F Sassi PhD).

4 Health Systems communicable diseases1 focuses on four chronic are now the prominent features of malnutrition in South Financing, World Health diseases that account for 60% of deaths worldwide: Africa,9 where a third of women and a tenth of men are Organization, Geneva, cardiovascular disease, cancer, diabetes, and respiratory obese,10 with highest rates in black women and white Switzerland (J A Lauer PhD, disorders. Prominent yet largely preventable behavioural men. After the political and economic transition, rates of D Chisholm PhD); Centre for Burden of Disease and risk factors associated with these diseases either obesity rose also in Russia, where one in four women and Cost-e ectiveness, University directly or indirectly via risk factors such as increased one in ten men are now obese, and rates are projected to of Queensland School of blood pressure or cholesterol concentrations include grow fast in the coming Population Health, Brisbane, tobacco, harmful alcohol use, unhealthy diets, physical QLD, Australia (Y Y Lee BHSci).

5 And Economic Analysis Unit, inactivity, and obesity . Ministry of Health, Mexico City, Underpinned by the forces of globalisation including Key messages Mexico (V Guajardo-Barron MSc). increased amounts of international trade, travel, and Cost-e ective interventions aimed at Tackling obesity by Correspondence to: shared communication the obesity epidemic is rapidly improving diets and increasing physical activity could Dr Franco Sassi, Health Division, becoming a worldwide Before 1980, obesity Directorate for Employment, usefully be added to a package of measures designed to Labour and Social A airs, rates were generally much lower than 10%.

6 Since then, deal with chronic diseases in low-income and Organisation for Economic rates have doubled or tripled in many countries, and in middle-income countries. Co-operation and Development, more than half of countries of the Organisation for Price interventions and regulation can produce the largest 2 rue Andr Pascal, F-75775 Paris Economic Co-operation and Development (OECD), 50% Cedex 16, France health gains in the shortest timeframe. Interventions in or more of the population is overweight. Mexico's primary care can be very e ective in countries with less population is one of the most a ected.

7 Between 2000 and capacity constraints. 2006, the prevalence of overweight (body-mass index A strategy of several interventions would generate [BMI] 25 kg/m ) increased from 62 1% to 69 9%, and substantially larger health gains than would individual the prevalence of obesity from 23 7% to 30 4%.3 In China, interventions, often with a favourable where rapid changes in dietary habits are exacting a large cost-effectiveness profile. toll,4 overweight rates doubled from 13 5% to 26 7% Health gains from interventions targeting children occur between 1991 and 2006, and the number of people who in the long term.

8 Regulation of food advertising to are obese tripled from 1 1% to 3 2%.5 The prevalence of children can be more e ective and e cient than can diabetes in China is estimated to be as high as that in the school-based health promotion. USA, with more than 92 million In Brazil, obesity Private-sector initiatives might contribute to Tackling rates tripled in men and almost doubled in women some risk factors while alleviating the burden on between 1975 and Smaller increases in overweight public-sector budgets, but more evidence of their were recorded in India (rates for women rose from 10 6% e ectiveness is needed.)

9 To 12 6% between 1998 99 and 2005 06), but increases Vol 376 November 20, 2010 1775. Series The gap between available and required resources to region, under the scrutiny of an expert group convened tackle the global burden of obesity and chronic diseases by the A microsimulation approach is best is already very large and, on present trends, is set to suited to addressing questions that would be di cult or grow further. In addition to making new resources impossible to answer through empirical investigation. available to address chronic diseases on a large scale In the assessment of the long-term population-level eg, via tobacco or alcohol tax levies there is a e ects and costs of preventive interventions that target consequent need to improve the use of existing resources a complex group of time-dependent and interacting risk to ensure adequate returns in terms of health, longevity, factors, an empirical study would need many variables, and economic progress.

10 Cost-e ectiveness information, a very large study population, and a very long follow-up together with strong nancial and budgetary analysis, to record results that in some cases are only realised has a key part to play in identi cation of core packages over a lifetime. of chronic disease interventions that can be realistically Risk factors in the CDP model range from more distant scaled up in countries at di erent levels of income, thus exposures (so-called distal risk factors), which are several contributing to the business case for large-scale steps away from disease events in the chain of causation, investment and action.

Prevalence and risk factors for obesity in a Nigerian ... 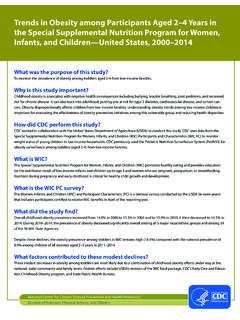 Trends in Obesity among Participants Aged 2–4 …

Division of Nutrition, Physical Activity, and Obesity Trends in Obesity among Participants Aged 2–4 Years in the Special Supplemental Nutrition Program for Women, 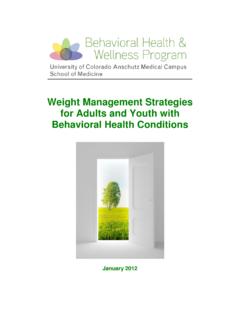 Weight Management Strategies for Adults and …