Scripture Promises & Prayers take Words with You Hosea 14:2. a manual for intercession There is no one who calls upon your name, who rouses himself to take hold of you. Isaiah 64:7. If they are prophets, and if the word of the LORD is with them, then let them intercede with the LORD of hosts. Jeremiah 27:18. I sought for a man among them who should build up the wall and stand in the breach before me for the land, that I should not destroy it, but I found none. Ezekiel 22:30. This publication contains The Holy Bible, English Standard Version , copyright 2001. by Crossway Bibles, a publishing ministry of Good News Publishers. ESV Text Edition: 2007. All rights reserved. Compiled by Tim Kerr, 2010. Graphics and typesetting by 3rd edition Suggested price: $ Why This Manual Was Written Many years ago I discovered a precious truth regarding prayer: God loves to hear his own Words prayed back to him!

Hosea 14:2 Scripture Promises & Prayers a manual for intercession Take Words with You

1 Scripture Promises & Prayers take Words with You Hosea 14:2. a manual for intercession There is no one who calls upon your name, who rouses himself to take hold of you. Isaiah 64:7. If they are prophets, and if the word of the LORD is with them, then let them intercede with the LORD of hosts. Jeremiah 27:18. I sought for a man among them who should build up the wall and stand in the breach before me for the land, that I should not destroy it, but I found none. Ezekiel 22:30. This publication contains The Holy Bible, English Standard Version , copyright 2001. by Crossway Bibles, a publishing ministry of Good News Publishers. ESV Text Edition: 2007. All rights reserved. Compiled by Tim Kerr, 2010. Graphics and typesetting by 3rd edition Suggested price: $ Why This Manual Was Written Many years ago I discovered a precious truth regarding prayer: God loves to hear his own Words prayed back to him!

2 When a small child crawls up on the lap of their father and says, Daddy when are you going to take us to the zoo like you promised? the father smiles and assures his child he has not forgotten and is very much looking forward to doing what he promised (when the time is right). In the same way, our heavenly Father delights to hear us remind him of his promises to us. The Bible is in fact a great big prayer manual that should ll and guide our prayers each and every day. It is hoped that the many promises of God written here will be prayed back to God in prayer as we seek to enter into God's purposes accomplished for us through Christ's cross. Sometimes we remember the gist of a promise but cannot remember what was said or where it is found in Scripture. This manual has been written to make that process easier by organizing the promises of God by categories and themes.

3 Why Scripture promises are so important for our prayers There are two Words that are very powerful when used in prayer. These Words are simply, you said . In Genesis 31:2, God makes a promise to Jacob. Involved in that promise is one of the most faith-giving promises in Scripture I will be with you . A promise that means God will do us good and pour out his favour upon us! Then later, when in deep crises, Jacob cries out to God in prayer and reminds God of his promise to him. Listen to what he says: But you said, I will surely do you good' and Jacob said, O God of my father Abraham and God of my father Isaac, O LORD who said to me, Return to your country and to your kindred, that I may do you good.'. Gen 32:12, 32:9. The fuel of an intercessor is the promises of God. We remind God in prayer of what he has said and call him to be faithful to his word.

4 Attaching God's promises to people and situations is the very backbone of all faith- lled praying. Some struggle with how to apply the promises in prayer correctly. Is it right for us to take promises given to the people of Israel or Moses or David, and apply them in prayer to our own situations? Basically, the answer is a quali ed YES . Let me show you why this is so. 2 Corinthians sheds some valuable light on this matter: For all the promises of God nd their Yes in him. That is why it is through him that we utter our Amen to God for his glory. 2 Cor 1:20. Not only is Jesus the ultimate ful llment of all the promises, but he is the key to the promises. We may say that the promises are made ultimately to him and for him and about him. Now look how this applies a few verses later in this book. Remember that the Corinthian congregation was predominantly non-Jewish.

5 But at the end of 2 Corinthians 6, Paul quotes several promises that were made centuries before to the people of Israel (see 2 Cor. 6:16b-18. and compare Lev. 26:12, Exod. 32:27, Isa 52:11). Now note the astonishing truth that Paul says to this church after quoting these Old Testament promises to them: Since we have these promises, beloved, let us cleanse ourselves from every de lement of body and spirit, bringing holiness to completion in the fear of God. 2 Cor 7:1. In Christ, we receive the promises and can call them our own. Because they are in the canon of Scripture, and because they are part of Christ's inheritance through his cross-work, and because we are also heirs of the promises in him (Gal 3:16,29), we too, in fact, have these promises for every dimension of our lives. In my own Bible, I have highlighted hundreds of promises in scripture with a green highlighter so I can nd them quickly and use them for prayer when needed.

6 We all need to nd a way to nd promises and use them in our prayers for others. This manual is an attempt to help with that process, but the best way of all is to become familiar with the promises of God in the context in which they are used in Scripture. How important and how powerful it is when God's people say to him in prayer: You said . How to Use This Manual This manual can be used in many ways to grow us in faith and prayer: 1. Use this manual as you spend daily time in prayer. At the back of the manual, write down the names of those you are praying for, both believers and unbelievers. Then reference a page number and verse that has a promise (or promises) you would like to use in praying for them. 2. Carry this manual to church and use it during collective times of corporate prayer in praying for others there are sections included for praising God, as well as many Scripture prayers, etc.

7 3. Carry this manual to small group and use it during times of praying for others. As certain needs come up, look in the manual for prayers and promises that deal with those issues and pray them back to God in expectant faith. 4. Use the manual in groups dedicated to prayer, such as men's or women's prayer groups; pre-service prayer groups; church-wide prayer meetings; during weeks of prayer; during times of prayer and fasting; during concerts of prayer in the church; etc. 5. Use the manual to nd verses to encourage others through emails and phone calls; hand-written notes; spontaneous times of edi cation at small groups, or at church gatherings. 6. When lacking faith and hope, read the promises of God to regain a clear view of God and his purposes. Just as Christian in Pilgrim's Progress escaped from the dungeon of despair when he found the key of promise in his pocket, God's promises are a powerful means of grace and light for our lives when darkness is all around.

8 7. Pray these promises over your family. 8. Use these promises during family devotions to keep the entire family reminded of God and his purposes for them in Christ. Teach your children to pray using Scripture. If this simple manual is used in any way to encourage and help God's people to pray with more faith, and more speci cally, then it will have served its purpose. May it be so! 1 Prayer Begins with God Developing the Motivation for Prayer: The Glory of God and His Sovereign Plan 11. Building Faith in the Promises By Meditation on God's Faithfulness 14. Praising God for Who He is and What He has Done 15. Praying with Christ at the Center: Recognizing the Supremacy of Christ in Everything 24. 2 The Fuel of Intercession (#1). God's Promises 1 Promises for Help with Prayer 39. 2 Promises to Answer Prayer 40.

World Christian Quotes Assembled and adapted by Mark Struck "The command has been to ʻgo,ʼ but we have stayed—in body, gifts, prayer and influence. 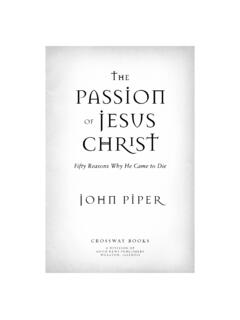 Christ, Passion, The passion of, Passion of 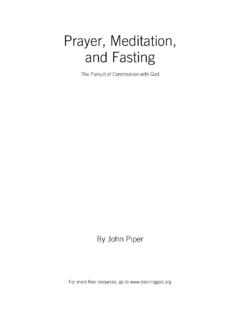 What does it mean to hunger for God, to feed on God? Jesus said, “I have food to eat that you do not know about” (John 4:32). What is this food? This seminar is designed to teach on the biblical disciplines of prayer, meditation, and fasting from the radically God … 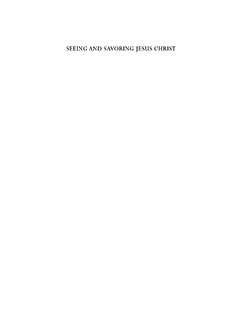 Seeing. and . Savoring. JESUS CHRIST. Study Guide Developed by Desiring God. ... the Bible exhorts us to “Taste and see that the Lord is good!” (Psalm 34:8). But what does it mean to . taste and see. ... They are included to supplement the study questions and … 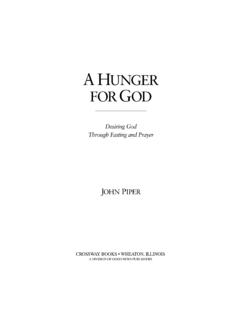 Desiring God Through Fasting and Prayer 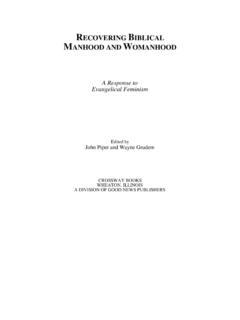 4 TABLE OF CONTENTS About the Authors 7 Preface John Piper and Wayne Grudem 10 Foreword For Single Men and Women (and the Rest of Us) John Piper 13 Section I: Vision and Overview 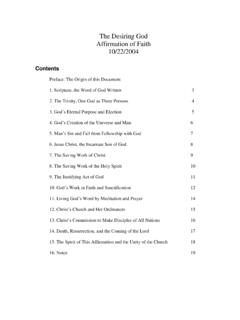 2 Preface: The Origin of This Document Rooted in centuries of biblical wisdom, this Affirmation of Faith originated at Bethlehem Baptist Church, Minneapolis, Minnesota, as the elders … 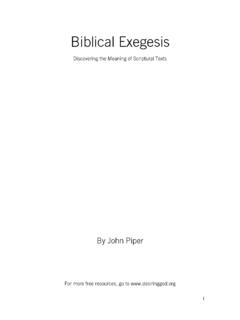 2 Preface John Wesley once said, “I have thought I am a creature of a day, passing through life as an arrow through the air. I am a spirit come from God, and returning to God, just 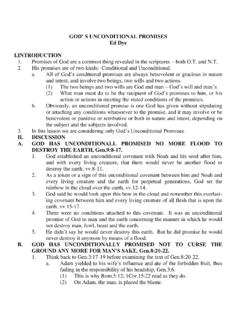 GOD’ S UNCONDITIONAL PROMISES Ed Dye I.INTRODUCTION 1. Promises of God are a common thing revealed in the scriptures – both O.T. and N.T. 2. 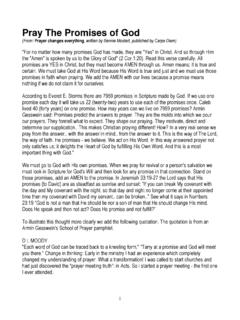 3 Promises for different needs: • God keeps His promises - God is not a man that he should lie, nor a son of man that He should change His mind 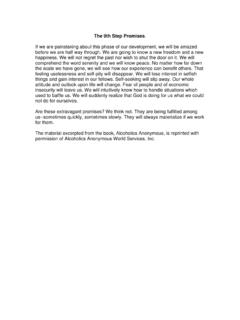 The 9th Step Promises.. If we are painstaking about this phase of our development, we will be amazed before we are half way through. We are going to …

God’s Promises to Live By “Man shall not live by bread alone but by every word that proceeds out of the mouth of God.” Matthew 4:4 He humbled you, causing you to hunger and then feeding you with manna, which neither 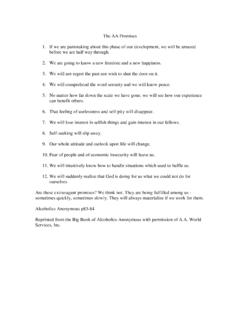 The AA Promises 1. If we are painstaking about this phase of our development, we will be amazed before we are half way through. 2. We are … 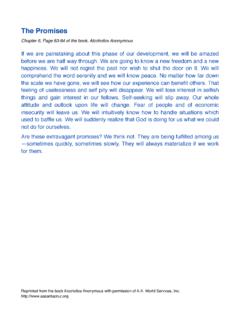 The Promises Chapter 6, Page 83-84 of the book, Alcoholics Anonymous If we are painstaking about this phase of our development, we will be amazed

Whereby are given unto us exceeding great and …

"Whereby are given unto us exceeding great and precious promises..." (2 Peter 1:4) "For all the promises of God in him are yea, and in him Amen, unto the glory of 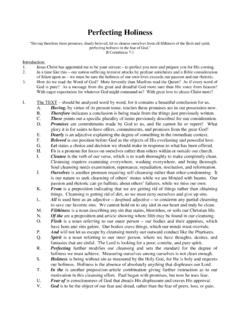 Perfecting Holiness “Having therefore these promises, dearly beloved, let us cleanse ourselves from all filthiness of the flesh and spirit, perfecting holiness in the fear of God.”

Promises of God A Topical Study Eight Lessons Bible Study Course “Study to shew thyself approved unto God, a workman that needeth not to be ashamed,