Testing MIL-STD- 1553 . After nearly a generation, there are still misconceptions on validating the 1553 databus. An expert draws from his experience to describe the perils and how to avoid then. by Leroy Earhart*. T. he most popular serial data- avionics on the B-52, F-15 and F-16. over the last three years has given us bus in military avionics to- 1553 should continue to broaden its interesting glimpses into the priority day is MIL-STD- 1553 . Since application and probably increase in some companies put on Testing . Some 1973, it has become the choice for areas such as flight control.

Testing MIL-STD-1553 After nearly a generation, there are still misconceptions on validating the 1553 databus. An expert draws from his experience to

1 Testing MIL-STD- 1553 . After nearly a generation, there are still misconceptions on validating the 1553 databus. An expert draws from his experience to describe the perils and how to avoid then. by Leroy Earhart*. T. he most popular serial data- avionics on the B-52, F-15 and F-16. over the last three years has given us bus in military avionics to- 1553 should continue to broaden its interesting glimpses into the priority day is MIL-STD- 1553 . Since application and probably increase in some companies put on Testing . Some 1973, it has become the choice for areas such as flight control.

2 Next- take the time to train personnel and system integration because of generation aircraft with dedicated acquire test equipment while others flexibility, inexpensiveness and avionics that require higher attempt to ad-lib through the Testing off-the-shelf availability. Today, it's throughput, such as the Advanced process. Most companies fall not only used in military applications, Tactical Fighter, will use 1553 . somewhere in the middle. They gen- but in commercial SYSTEMS as well. Although 1553 has been around for erally have test equipment with partial 1553 is a mature standard for nearly 20 years, there are sill many capability, but lack experience for future applications as well as retro- misconceptions about its test effective Testing .

3 It creates a two-fold problem. First, the full capability of a terminal's design will not be *Mr. Earhart Subcontractors who believe is president of that validation Testing is Test SYSTEMS , too costly and unnecessary The optic version (MIL- Phoenix, Ariz. could find out how STD-1773) and High feed The company expensive it delay can be. Data Bus will supplement supports 1553 1553 , but will not replace it. with test equipment, and validation. Let's consider several seminars and areas that appear to me particularly determined without extensive Testing . validation troublesome.

4 Secondly, improper operation not The purpose of validation Testing is found prior to a production run or to verify compliance of a terminal's system integration becomes far more fits. Its flexibility enables it to mesh databus interface with MIL-STD- costly to track down in the long run. with other standards and network 1553 . Using published test plans, you Two other factors appear to be architectures such as MIL-STD- can verify, characterize a terminal and responsible for insufficient Testing . An 1760A, which defines aircraft stores. define its margins and limitations.

5 The obvious one is that Testing is The fiber optic version (MIL-STD- information gained is essential to frequently cut back when costs 1773) and High Speed Data Bus will avoid incompatibilities before system increase and time runs short. The supplement 1553 , but will not replace integration. Since validation Testing it. They will not threaten 1553 because does not test the operation or they lack its maturity, and other functional aspects of a subsystem, it benefits. Economics is a controlling can be performed as soon as remote A validated component factor and, with military programs terminal hardware is available.

6 Must also being cutback, a drive to modify many Subcontractors who believe that used correctly interfaces with a higher speed bus may validation Testing is too costly and not be feasible. unnecessary could find out how Retrofitting applications should expensive the delay can be. second reason is that there are widely continue to grow, as in the new Our activity in validation Testing held misconceptions about the need for Testing . Let's look at the three Avionics/March 1991. most common fallacies, then at and variations between separate LRUs standard feature.

7 This is a good remote terminal (RT) failures we have all have an effect. Different power example of where accuracy is necessary found in Testing . Finally, we'll supplies can influence board for characterization of an RT's margins. examine several options available for performance. Although these physical Another problem is the r validation Testing . variations mainly affect electrical and sponse time of an RT to a command. The first misconception is: "Vali- noise rejection, it should not be taken We have seen the allowable us dation Testing is not necessary if for granted that protocol tests will exceeded many times.

8 We've had validated components are used to produce identical results with different several RTs respond incorrectly in build the RT. "This is the most widely software or firmware. protocol tests by setting the Busy bit or held false assumption we have come Subsystem Flag bit inappropriately. across. There are chipsets and Using the wrong part (transformer/. components which have partial transceiver) or using the right part validation Testing by the SYSTEMS Improper operation not incorrectly is common. Improper Electronic Analysis Facility found prior to a production initialization of the chip is also common (SEAFAC) at Wright Patterson Air run or system integration because everyone writes software Force Base.

9 Those which SEAFAC becomes far more costly to differently. In fact, some failures are found to be satisfactory were track doom in the long run. actually problems in the chipset design "validated" or "SEAFAC certified." that SEAFAC missed in its Testing ! While using such parts in an RT Each RT, of course, has its own minimizes problems, they do not problem areas. Take, for instance, the eliminate the need for thorough Past Operation output amplitude of one RT that Testing . It is important that the correct The last misconception is: "Vali- validated components be used dation Testing is not necessary together.

10 This seems quite obvious, because the LRU has been operating but we have tested RTs that had, for in the system ." The fact that an RT is instance, the wrong transceivers or already functioning ( , it's flying) Margins are not checked transformers ( , incorrect turns ratio does not mean it satisfies MIL-STD- 1553 . We once evaluated in normal system M. or quiescent state). A validated component must also an RT that had been flying and found operation or be used correctly. One company, a broken address line - among other operational Testing . after its first production run, brought problems. 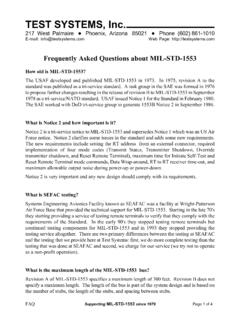 FAQ Page 2 of 4 TEST SYSTEMS, Inc. What is the impact of degraded input impedance to my system? The MIL-STD-1553 data bus is a 70 - 85 Ohm terminated transmission line specified to