-2- Texas Law on Piercing Corporate Veil.doc promissory note holder to recover against the shareholders of a corporation. The court reasoned that, while shareholders, officers, and directors are generally shielded from

3 Piercing the Corporate veil, also known as the doctrine of Corporate disregard, is a method used by plaintiffs and courts to impose liability on officers, directors, and shareholders of a corporation. Additionally, plaintiffs will often attempt to pierce the Corporate veil in order to impose liability upon a parent corporation for the obligations of a subsidiary. For the purposes of legal proceedings, subsidiary corporations and parent corporations are separate and distinct persons as a matter of law and the separate entity of corporations will be observed by the courts even where one company may dominate or control, or even treat another company as a mere department, instrumentality, or agency.

4 Texas courts are generally willing to disregard the Corporate form in this situation only when corporations are not operated as separate entities, but rather integrate their resources to achieve a common business purpose. Plaintiffs, therefore, often attempt to pierce the Corporate veil in order to treat the two corporations as one entity. Section 2. Theories Used in Corporate Veil Piercing The Alter Ego Theory Prior to the Texas Supreme Court's decision in Castleberry v. Branscum, Texas courts consistently held that personal liability should be imposed on a [share]holder only in extraordinary circumstances. In Castleberry, however, the Texas Supreme Court pierced the Corporate veil by using the alter ego theory to allow a -1- Texas Law on Piercing Corporate promissory note holder to recover against the shareholders of a corporation.

5 The court reasoned that, while shareholders, officers, and directors are generally shielded from personal liability for Corporate obligations, when these same people abuse the Corporate privilege, courts will disregard the Corporate fiction and hold them personally liable. Setting forth the rationale behind the decision, the court stated if the shareholders themselves disregard the separation of the Corporate enterprise, the law will also disregard it so far as necessary to protect individual and Corporate creditors.. The alter ego theory permits a court to impose liability upon an individual shareholder, officer, director, or affiliate for the acts of a corporation.

8 (i) whether parent is subsidiary's sole source of business;. (j) parent's use of subsidiary's property as its own;. -2- Texas Law on Piercing Corporate (k) combination of corporations' daily operations;. (l) lack of Corporate formalities by the subsidiary;. (m) whether directors and officers of subsidiary are acting independently or in the best interests of the parent; and (n) whether parent's employee, officer or director was connected to the subsidiary's action that was the basis of the suit. In Castleberry, the Texas Supreme Court held that Texas courts should take a flexible, fact-specific approach since the purpose of the Corporate veil doctrine is to prevent use of the Corporate entity as a cloak for fraud or illegality or to work an injustice, and that purpose should not be thwarted.

9 The Castleberry court held that plaintiffs did not need to show fraud or intent to defraud as a prerequisite to Piercing a Corporate veil, so long as recognizing the separate Corporate existence would bring about an inequitable result. Therefore, under Castleberry, tort claimants and contract creditors must show only constructive fraud to pierce the Corporate veil. In response to this extremely broad interpretation of the doctrine of Corporate disregard by the Texas Supreme Court, the Texas legislature amended portions of the Texas Business Corporation Act. In Texas , a shareholder's personal liability for obligations of a Texas corporation is governed by Article of the Texas Business Corporation Act [or Sections , , and of the Texas Business Organizations Code, where that Code is applicable] ( Article ).

10 After several legislative amendments, Article now provides that no personal liability for contractual obligations exists unless the plaintiff can demonstrate that the shareholder, owner, subscriber, or affiliate caused the corporation to be used for the purpose of perpetrating and did perpetrate an actual fraud on the plaintiff primarily for the direct personal benefit of the shareholder, owner, subscriber, or affiliate. Therefore, plaintiffs may no longer rely upon the constructive fraud set forth in Castleberry and must now show that an actual fraud occurred. Additionally, since amended in 1993, Article has provided that, with certain exceptions, Section A of Article is the sole method for Piercing the Corporate veil and imposing liability upon an individual for the obligations of a corporation or upon one corporation for the obligations of another corporation. 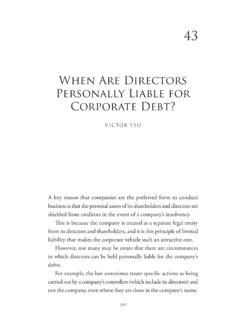 When Are Directors Personally liable for Corporate …

191 WhEn ARE DIRECTORS PERSOnAlly lIABlE fOR CORPORATE DEBT? Another example of the corporate veil being lifted is where the company’s controller is regarded as its “alter-ego” in that the 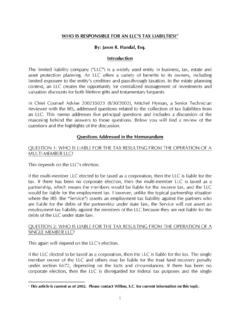 4 corporation and the taxpayer-owner are considered alter egos, and the liabilities of the owner may be collected from the corporation, or vice versa. 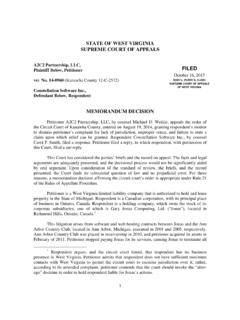 Relationships Between Parent and Subsidiary …