Table 1 presents an overview of the text analysis operations that we address, categorized in three sections. In the data preparation section we discuss five steps to prepare texts for analysis. The first step, importing text, covers the functions for reading texts from various types of file formats (e.g., txt, csv, pdf) into a raw text corpus in R.

2 It can be a difficult method to apply, however, because it requires knowledge of various techniques, and the software required to perform most of these techniques is not Downloaded by [ ] at 01:16 05 November 2017. readily available in common statistical software packages. In this teacher's corner, we address these barriers by providing an overview of general steps and operations in a computational text Analysis project, and demonstrate how each step can be performed using the R statistical software. As a popular open-source platform, R has an extensive user community that develops and maintains a wide range of text Analysis packages.

3 We show that these packages make it easy to perform advanced text analytics. With the increasing importance of computational text Analysis in communication research (Boumans & Trilling, 2016; Grimmer & Stewart, 2013), many researchers face the challenge of learning how to use advanced software that enables this type of Analysis . Currently, one of the most popular environments for computational methods and the emerging field of data science 1 is the R. statistical software (R Core Team, 2017). However, for researchers that are not well-versed in programming, learning how to use R can be a challenge, and performing text Analysis in particular can seem daunting.

4 In this teacher's corner, we show that performing text Analysis in R is not as hard as some might fear. We provide a step-by-step introduction into the use of common techniques, with the aim of helping researchers get acquainted with computational text Analysis in general, as well as getting a start at performing advanced text Analysis studies in R. R is a free, open-source, cross-platform programming environment. In contrast to most program- ming languages, R was specifically designed for statistical Analysis , which makes it highly suitable for data science applications.

5 Although the learning curve for programming with R can be steep, especially for people without prior programming experience, the tools now available for carrying out text Analysis in R make it easy to perform powerful, cutting-edge text analytics using only a few simple commands. One of the keys to R's explosive growth (Fox & Leanage, 2016; TIOBE, 2017) has been its densely populated collection of extension software libraries, known in R terminology as packages, supplied and maintained by R's extensive user community.

6 Each package extends the functionality of the base R language and core packages, and in addition to functions and data must include documentation and examples, often in the form of vignettes demonstrating the use of the package. The best-known package repository, the Comprehensive R Archive Network (CRAN), currently has over 10,000 packages that are published, and which have gone through an extensive CONTACT Kasper Welbers Institute for Media Studies, University of Leuven, Sint-Andriesstraat 2 box 15530, Antwerp 2000, Belgium.

7 Color versions of one or more of the figures in the article can be found online at 1. The term data science is a popular buzzword related to data-driven research and big data (Provost & Fawcett, 2013). 2017 Taylor & Francis Group, LLC. 246 K. WELBERS ET AL. screening for procedural conformity and cross-platform compatibility before being accepted by the R thus features a wide range of inter-compatible packages, maintained and continuously updated by scholars, practitioners, and projects such as RStudio and rOpenSci.

8 Furthermore, these packages may be installed easily and safely from within the R environment using a single command. R thus provides a solid bridge for developers and users of new Analysis tools to meet, making it a very suitable programming environment for scientific collaboration. Text Analysis in particular has become well established in R. There is a vast collection of dedicated text processing and text Analysis packages, from low-level string operations (Gagolewski, 2017) to advanced text modeling techniques such as fitting Latent Dirichlet Allocation models (Blei, Ng, &.)

9 Jordan, 2003; Roberts et al., 2014) nearly 50 packages in total at our last count. Furthermore, there is an increasing effort among developers to cooperate and coordinate, such as the rOpenSci special interest One of the main advantages of performing text Analysis in R is that it is often possible, and relatively easy, to switch between different packages or to combine them. Recent efforts among the R text Analysis developers' community are designed to promote this interoperability to maximize flexibility and choice among As a result, learning the basics for text Analysis in R.

10 Provides access to a wide range of advanced text Analysis features. Downloaded by [ ] at 01:16 05 November 2017. Structure of this Teacher's Corner This teacher's corner covers the most common steps for performing text Analysis in R, from data preparation to Analysis , and provides easy to replicate example code to perform each step. The example code is also digitally available in our online appendix, which is updated over We focus primarily on bag-of-words text Analysis approaches, meaning that only the frequencies of words per text are used and word positions are ignored. 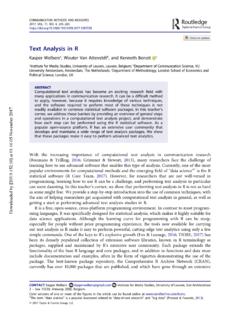 24 68 0 20 40 60 80 100 Log(Expenses) 3 Interpreting coefﬁcients in logarithmically models with logarithmic transformations 3.1 Linear model: Yi = + Xi + i Recall that in the linear regression model, logYi = + Xi + i, the coefﬁcient gives us directly the change in Y for a one-unit change in X.No additional interpretation is required beyond the 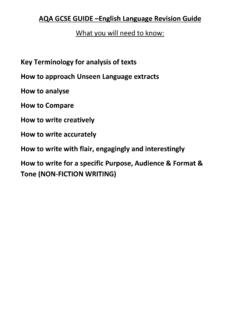 Key Terminology for analysis of texts How to approach ...

Writer [s Techniques ***Alliteration: a series of words in a row which have the same first consonant sound.*** Assonance: repetition of vowel sounds. Allegory: extended metaphor in which a symbolic story is told Anecdote: a short story using examples to support ideas Bias: inclination or prejudice for or against one person or group, especially in a way considered to be …

Application of Reiss’ S Text Typology in Translation- a ...

Application of Reiss’ S Text Typology in Translation- a Case Analysis of Franklin D. Roosevelt’s fourth inaugural ... terminology, rather than the literary style used by the author. Secondly, for the text of expressive text type, ... which are usually used in some formal texts to make the texts more standard and difficulty. So when translated

Multimodal analysis includes the analysis of communication in all its forms, but is particularly concerned with texts which contain the interaction and integration of two or more semiotic resources – or ‘modes’ of communication – in order to achieve the communicative functions of … 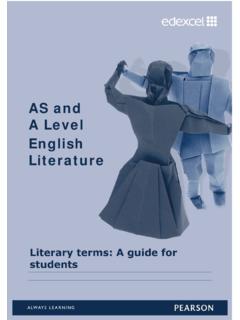 The terminology below may be used support your reading and response to literature. It will also help you access any critical reading on your specified literary texts, alongside any specific glossaries that have been provided in Edexcel’s support materials. To produce high quality analytical writing you need the tools to do so and the ability to

the analysis of the link-structure of the World Wide Web. Arguably, these algorithms can be singled out as key elements of the paradigm-shift triggered in the ﬁeld of Web search technology, by providing a Web page ranking mechanism that relies on the col-lective knowledge of Web architects rather than in-dividual content analysis of Web pages.

effective selection, organization, and analysis of content a. write clearly and coherently b. address the assigned task appropriately for an audience of educated adults c. draw evidence from informational texts to support analysis d. organize and develop ideas logically, making coherent connections between them e. 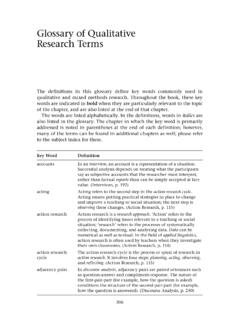 Glossary of Qualitative Research Terms 309 Key Word Definition confirmability Confirmability is the concept that researchers should fully explain or disclose the data that they are basing their interpretations on, or at least make those data available. Confirmability can be improved by maintaining precise data