The ABC’s of Fire Alarm Systems - Section I

The ABC's of fire Alarm Systems - Section I. By Anthony J. Shalna 2009 Principal IMSA Representative to the Automatic fire Alarm Association President: Southeastern Signalmen of Massachusetts Approvals Manager: Gamewell-FCI by Honeywell A fire Alarm system is used primarily to evacuate the prem- ises in the event of occurrence of a fire condition and then 2) A primary operating power sup- secondarily to report the fire to the proper authorities. ply (120 VAC). A fire Alarm system differs somewhat from a security system . 3) A secondary or standby power supply. This is most The security system only recognizes two states or conditions: often a rechargeable storage battery, although genera- normal or Alarm , and cannot differentiate between a line tors are permitted subject to certain conditions. break and the opening of an Alarm switch. The fire Alarm system recognizes four different states or conditions: normal, 4) At least one initiating device circuit to which is wired at Alarm , trouble and supervisory.

1 The ABC's of fire Alarm Systems - Section I. By Anthony J. Shalna 2009 Principal IMSA Representative to the Automatic fire Alarm Association President: Southeastern Signalmen of Massachusetts Approvals Manager: Gamewell-FCI by Honeywell A fire Alarm system is used primarily to evacuate the prem- ises in the event of occurrence of a fire condition and then 2) A primary operating power sup- secondarily to report the fire to the proper authorities. ply (120 VAC). A fire Alarm system differs somewhat from a security system . 3) A secondary or standby power supply. This is most The security system only recognizes two states or conditions: often a rechargeable storage battery, although genera- normal or Alarm , and cannot differentiate between a line tors are permitted subject to certain conditions. break and the opening of an Alarm switch. The fire Alarm system recognizes four different states or conditions: normal, 4) At least one initiating device circuit to which is wired at Alarm , trouble and supervisory.

2 Least one manual station, automatic heat or smoke detec- tors, waterflow switch activated by a sprinkler system , Simplistically speaking, a basic system consists of a fire etc. These devices are located in one area, or zone, so Alarm control panel (FACP) to which are connected initiating an Alarm condition in this zone can direct fire fighting (input) devices, notification (output) appliances, a source of personnel to the source of the Alarm . Typically, a zone operating power, and a source of standby power in the event usually consists of a floor of a small building, or wing the operating power should fail. of a larger building, etc. with area limitations defined in the National fire Alarm Code (NFPA 72). The function of a fire Alarm control panel is basically three- fold: 5) At least one (output) notification appliance circuit to 1) Accept an Alarm or supervisory input from an initiating which is wired at least one horn, bell, and strobe, if device.

3 Required. 2) Provide an Alarm output to the notification The basic minimum system is shown in Figure 1. appliance(s). Figure 1. 3) Monitor the integrity of the panel itself and also the wir- ing to the above devices. MINIMUM BASIC system . fire Alarm Systems have changed dramatically over the past few years, primarily due to the ad- vent of the low priced micropro- cessor. Basically there are two different approaches used for the fire Alarm control panel, conven- tional and addressable. We are concerning ourselves in this installment with the con- ventional (hard-wired) system as opposed to an addressable system , which will be covered in a following installment. The minimum basic components of a conventional system are: 1) A locked fire Alarm control panel listed for the purpose The secondary power supply (usually a battery) automati- by a Nationally Recognized Testing Laboratory, (NRTL) cally furnishes operating power to the system in the event as recognized by OSHA.

4 The standard governing fire of failure of the main 120 VAC supply or if the main supply Alarm control panels is ANSI/UL Standard 864, current- voltage falls below 85% of normal ( Brown-out condition). ly entering it's ninth edition. OSHA currently recognizes The battery must be of the rechargeable type, since dry cells Underwriters Laboratories, Factory Mutual Approvals are not permitted. and ETL-Semko as certified to test equipment per this standard. Continued on page 43. Page 42 IMSA Journal The ABC's of fire Alarm Systems - Section I .. Continued from page 42. A gel- cell battery is a rechargeable battery.) The battery must relays were eventually replaced by solid state compo- operate the system for a specified period of time in a standby or nents, mostly microprocessors, that monitor the circuit quiescent condition, and have sufficient reserve at the end of the supervisory current. standby period to operate the panel in an Alarm condition for a period of five (5) minutes.

5 Batteries are required by the National fire Alarm Code in all fire Alarm Systems not having multiple standby generators. The control panel must also be capable of recharging the battery within a specified period after a discharge. BASIC system OPERATION. Initiating devices employed in a su- pervised, conventional system usually have normally open, dry' contacts which close on Alarm . ( Dry' contacts are contacts that have no voltage ap- plied to them.) Exceptions to this are 2- wire smoke detectors, which receive their operating power from the (supervisory) current flowing through In Figure 2, we see an initiating circuit of a fire Alarm the circuit, and alter the characteristics of the circuit when they go Control Panel (FACP). Current flows out of the FACP. into Alarm . These will be covered in a separate article. and through the circuit, in and out of one contact of the initiating devices, through the end of line resistor The act of operating a manual station or actuation of an automatic (EOL), through the second contact of each initiating detector closes the contacts of the device and applies power to device and back to the FACP.

6 (We will discuss the in the Alarm circuitry, causing the panel to go into Alarm , light one and out wiring to the contacts later.). or more red LEDs on the panel, and energize the notification appliance(s). This appears to resemble the classic operation of a Continued on page 44. doorbell system , but the BIG difference here is that the fire Alarm control has the ability to monitor it's own integrity, commonly referred to as supervision. SUPERVISION. A supervised system (sometimes referred to as a closed circuit . system ) will create a trouble signal in the event of a break in the field wiring, disconnection or removal of an initiating device or notification appliance, failure of main operating power, discon- nection of the standby battery, or off-normal position of a panel switch. A trouble condition will light one or more yellow LEDs on the panel and cause an audible signal, (usually a piezoelectric device) to sound. The audible signal can be silenced by operating the Trouble Silence' switch on the panel.

7 Since the panel is locked, the trouble sounder can only be silenced by authorized personnel who have access to the key. In a conventional system , supervision is made possible by use of an End of Line' (EOL) device, usually a resistor, although other components may be used, depending on the designer. TROUBLE CIRCUITRY. Many years ago, manufacturers used relays to achieve supervision. Two relay coils, Alarm and supervisory, were connected in series with the initiating device circuit. The supervisory relay was rated at a lower voltage and was continually energized by the reduced current flowing through the circuit via the EOL device. The Alarm relay was rated at the operating voltage and would only energize when the current was increased by an initiating device that short- circuited the EOL device. If the circuit is opened by a break in the wiring, or unauthorized removal of a detector or station, or if the winding of either relay opened, the trouble relay contacts would fall out, applying voltage to the trouble LED and sounder.

8 These May/June 2009 Page 43. The ABC's of fire Alarm Systems - Section I .. Continued from page 43. In the event of a break in the outside wiring, unauthorized removal of a detector or sta- tion, failure of the main power supply, or re- moval of the EOL device, the microprocessor will sense the change in circuit current and create a trouble condition, energizing the yellow system Trouble LED, a yellow Zone Trouble LED dedicated to that circuit, and an audible sounder inside the panel, signify- ing a trouble condition. The sounder may be silenced by operating a Trouble Silence'. switch, but the yellow LED(s) will remain lit. Once the trouble condition is rectified and the circuit in question is restored to normal, the audible signal will sound again, or ring back'. The trouble silencing switch is then restored to the normal position, silencing the sounder and extinguishing the Trouble LED(s). Alarm PROCESSING. In the event of an Alarm , the contacts in the initiating device close, shunting out the EOL, raising the circuit voltage to full operating voltage, and energizing the Alarm circuitry.

9 The Alarm circuitry will then ap- ply operating power to the notification appliance circuit, sounding horns, flashing strobes, and performing other functions. This type of circuit is referred to as a Class B, Style B circuit. The National fire Code, NFPA Standard 72, makes references to both trouble circuitry operates and connects line A to line D, and Classes' and Styles' for circuits. The Class A or B designa- line B to line C, thus effectively shunting out a single break tion has been traditionally used for discussion purposes, anywhere in the circuit. Alarm operation otherwise is exactly while the Style designations refer to a wider variety of cir- the same as in the Class B circuit. A Class A circuit therefore, cuits having subtle differences which are beyond the scope has the ability to turn in an Alarm in spite of a single break of this article. (The 2010 Edition of the National fire Alarm in the circuit. This gives the circuit a greater degree of sur- Code will apparently do away with style classifications and vivability than the Class B circuit, eliminates the problem adopt new definitions of Classes.)

10 Of lost' EOL devices, and makes trouble shooting easier. The main disadvantage is that it requires twice the amount CLASS B, STYLE B INITIATING CIRCUIT of wires and the codes require that the return pair be run Thus, a Class B (or Style B) circuit is a two-wire circuit in separate raceways or conduit from the outgoing pair to with external EOL. Any device electrically located beyond ensure survivability. One typical trouble situation is often a break in the field wiring will be disabled. Any devices caused by a different trade unknowingly cutting through a located electrically before the break will still be able to turn conduit. There are numerous horror stories regarding this. in an Alarm . A Class B system is economical, since it only uses two wires, but has several drawbacks, such as surviv- CLASS B, STYLE Y NOTIFICATION APPLIANCE CIRCUIT. ability, or inability to operate if a device beyond the break Notification appliances, such as bells, horns, strobes or goes into Alarm . 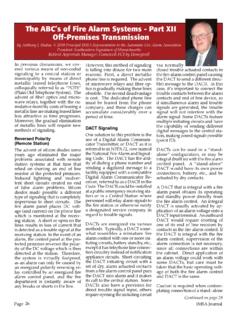 The ABC’s of Fire Alarm Systems - Part XII Off …

Page 2 IMSA Journal The ABC’s of Fire Alarm Systems – Part XII . . . Continued from page 26 DACT to a fire alarm control panel, since nothing is as simple as it seems. 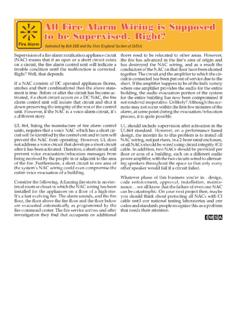 ing speakers throughout the space so that only every other speaker would fail if a circuit failed. Whatever phase of this business you're in. ..design, 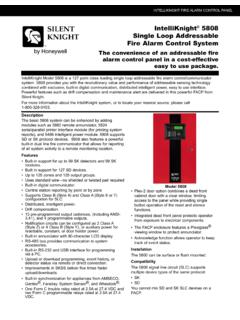 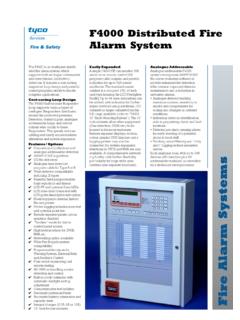