THE ACTS OF THE APOSTLES - Connecting With Jesus

Page |1. THE acts OF THE APOSTLES . Chapter 1: God's Purpose for His Church 1. What is God's purpose for the church? Is your church fulfilling that purpose? 2. What would it take for your church to become a house of prayer for all people (Isaiah 56:7)? What changes would have to take place? 3. Joseph and Daniel lived in difficult circumstances, yet they were a source of life to those around them. How is your church bringing life to your community? 4. Israel was privileged to be God's representative to the world. Adventists also believe that they have a special message for the world.

P a g e | 1 The Acts of the Apostles Study Guide THE ACTS OF THE APOSTLES Chapter 1: God’s Purpose for His Church 1. What is God’s purpose for the church?

1 Page |1. THE acts OF THE APOSTLES . Chapter 1: God's Purpose for His Church 1. What is God's purpose for the church? Is your church fulfilling that purpose? 2. What would it take for your church to become a house of prayer for all people (Isaiah 56:7)? What changes would have to take place? 3. Joseph and Daniel lived in difficult circumstances, yet they were a source of life to those around them. How is your church bringing life to your community? 4. Israel was privileged to be God's representative to the world. Adventists also believe that they have a special message for the world.

2 Discuss how Israel failed in its mission. Chapter 2: The Training of the Twelve 1. What type of people did Jesus choose to proclaim the kingdom of God in this world? What was the secret of their success? 2. Why were thousands converted by the words of simple, unlearned people? What does that say to you? 3. Read the prayer of Jesus for His disciples in John 17:6-19. Imagine Jesus praying this prayer for you. What is Jesus calling you to do? Chapter 3: The Great Commission 1. What insights did the disciples gain concerning their task and mission during the forty days that Jesus spent with them?

3 2. Matthew 28:18 says that all authority is given to Jesus in heaven and on earth. What does this mean? How does this benefit you in your work of carrying out the Great Commission? 3. Have you ever won anyone to Jesus Christ by having superior arguments? Share instances when the Holy Spirit has given you just the right approach in talking with someone. 4. God's plan for sharing the Good News with the world depends on people. How can you become more active in taking the gospel to the world? Chapter 4: Pentecost 1. Read acts 2:1-6. What outward signs were given when the Holy Spirit came upon the disciples in the upper room?

5 4. Read John 16:8. Consider how the Spirit reproves the world of sin, teaches about righteousness, and warns about the coming judgment. The acts of the APOSTLES study Guide Page |2. Chapter 6: At the Temple Gate 1. Why were the people of Jerusalem amazed when Peter and John were able to heal the cripple? How did Peter explain the healing? See acts 3:16. 2. Read acts 4:1-3, 5-7, 10. The boldness of the disciples amazed the priests and religious leaders because just a few weeks earlier the disciples had fled and hid when Jesus had been taken prisoner.

6 What caused the change? Can the same thing happen to you? 3. What would you do if you were ordered by the government not to speak or teach at all in the name of Jesus ? 4. Read the prayer of the disciples in acts 4:24-30. What three things did the disciples ask for in their prayer? Have you ever asked for anything like that? Chapter 7: A Warning Against Hypocrisy 1. What is a hypocrite? Why don't people like hypocrites? What did Ananias and Sapphira want people to think about them? 2. God blesses, increases goods, and provides the daily needs of all, but in return He expects people to pay tithe and give generous offerings.

7 Think about your record of returning tithes and offerings. Ask the Holy Spirit to guide you in this area of life. 3. Read Revelation 21:27. Consider God's attitude toward those who tell lies. 4. What did God want to teach the many new believers in the church by the swift judgment on Ananias and Sapphira? See acts 5:11. Chapter 8: Before the Sanhedrin 1. Contrast the differences between the training that the disciples received and that which the Sadducees and Pharisees received. 2. People are still persecuted for preaching and worshiping Christ.

8 Share recent stories of persecution, then pray for the people in that community or country. 3. Read acts 5:17-20. Why did the priests and rulers arrest the APOSTLES ? What did the priests and rulers hope to accomplish by putting the APOSTLES in prison? Chapter 9: The Seven Deacons 1. Why were there problems between the Greeks and the Jews? 2. Read the story of two deacons, Stephen ( acts 7) and Philip ( acts 8). What made these men such powerful workers for God? 3. Read Titus 1:7-9. Discuss the qualifications for spiritual leadership. 4. What should be the relationship between deacons and elders or pastors?

9 Chapter 10: The First Christian Martyr 1. What motivated the priests and rulers to condemn Stephen to death? 2. According to Luke, the apostle , Stephen ably defended the truth so that he utterly defeated his opponents. Read Luke 21:14, 15. If we are called to speak in Jesus ' name, who will be the source of our wisdom? 3. Read Psalm 34:7. The author writes that as Stephen faced his judges to answer the charge of blasphemy, his face appeared as the face of an angel. Why did Stephen have the appearance of angel? The acts of the APOSTLES study Guide Page |3.

10 4. Read acts 7:54, 57, 58. Why did Stephen rehearse the history of the chosen people of God when he was answering the charge against himself? What was the effect of this rehearsal of history on his audience? Chapter 11: The Gospel in Samaria 1. The persecution that followed Stephen's death scattered the church to Judea, Samaria, and other parts of the world. Do you know of other situations where problems in the church caused the church to grow in new areas? 2. Read acts 8:4-8. Discuss the various aspects of Philip's ministry. 3. An angel told Philip to travel south on the road from Jerusalem toward Gaza.

P a g e | 3 Steps to Christ Study Guide 2. Is it possible to “pray always”? Do you tend to pray more in times of hardship than in times of ease?

THE DESIRE OF AGES - Connecting With Jesus

P a g e | 4 The Desire of Ages Study Guide Chapter 15: At the Marriage Feast 1. Read John 2:4. How did Jesus respond to Mary? By responding as He did, what was Jesus 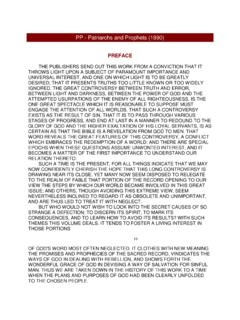 P a g e | 3 Christian Service Study Guide relationship between the gospel and health ministries? 2. What is the purpose of hospitals, health restaurants, and cooking schools? In what ways are t 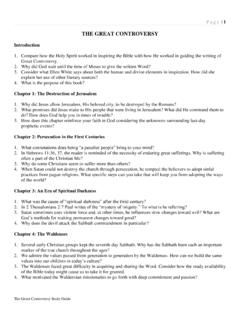 THE GREAT CONTROVERSY - Connecting With Jesus

P a g e | 2 The Great Controversy Study Guide Chapter 5: John Wycliffe 1. What were God‟s providential leadings in the life of Wycliffe that made it … 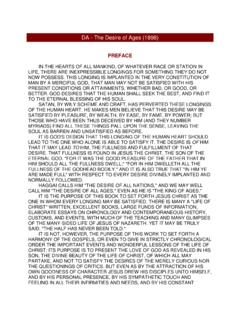 da - the desire of ages (1898) preface in the hearts of all mankind, of whatever race or station in life, there are inexpressible longings for something they do not

Desire, Ages, The desire of ages

P a g e | 2 Ministry of Healing Study Guide 2. The healed demoniacs did not have perfect characters, yet Jesus sent them as missionaries in their region. 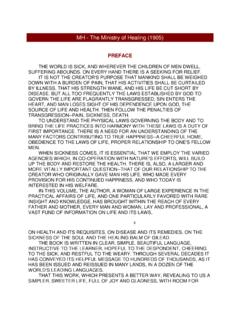 mh - the ministry of healing (1905) preface the world is sick, and wherever the children of men dwell, suffering abounds. on every hand there is a seeking for relief.

Healing, Ministry, The ministry of healing 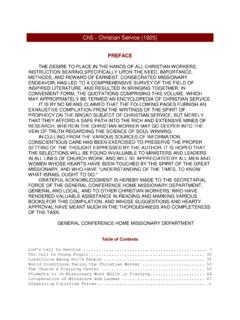 chs - christian service (1925) preface the desire to place in the hands of all christian workers, instruction bearing specifically upon the need, importance, 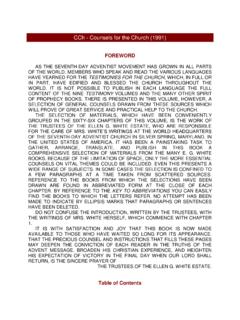 cch - counsels for the church (1991) foreword as the seventh-day adventist movement has grown in all parts of the world, members who speak and read the various languages

The Epistle To Titus Introduction AUTHOR The apostle Paul, as stated in the salutation (1:1).The testimony of church history also provides overwhelming support that Paul is the author.

The First Epistle To Timothy. Introduction. AUTHOR. The apostle . Pau. l, as stated in the salutation (1:1). The internal evidence certainly supports Paul as the

COVERING ACTS OF THE APOSTLES Chapters 15-28